Via ABC News, an English captioned report by Univision on Fast and Furious.  (video embed not working, click on link to view) First some background provided by ABC News: On January 30, 2010, a commando of at least 20 hit men parked themselves outside a birthday party...

Amy Bishop, who shot up her colleagues at the University of Alabama, was one in a long line of violent criminals the MSM and left-blogpshere immediately tagged as a Tea Partier without any basis. My post at the time, Inevitable “Tea Party” and “Amy Bishop” Link Attempt: There is...

The battle between Lee Anderson and John Barrow for the fate of Georgia’s 12th Congressional district is under way and it appears that the race is going to be a tight one. This is on the Operation Counterweight final list. After a protracted primary battle,...

In the deep blue bubble

Still true: “a discussion with the likes of Brad DeLong is not productive”

Posted by William A. Jacobson on September 30, 2012 28 Comments
The class clown of the academic internet is beclowning again; must be he's upset with my investigation into Elizabeth Warren so he attacks the only way he knows how.  Rather than address the merits, he picks a three and one-half year old post of mine and calls me names.  Class act. So I thought I'd revisit the wise observation by Prof. Stephen Bainbridge of UCLA Law School:

"a discussion with the likes of Brad DeLong is not productive"

I figured that out a long time ago. But now my friends Larry Ribstein, Jonathan Adler, JW Verret, and Todd Henderson have figured it out too. I won't bother you with the merits of the argument, because you can't have an argument--let alone a conversation--with someone with Delong's consistent pattern of, as Adler puts it, "selective editing" and misrepresenting his opponent's positions. To quote Adler again, "Yes, this is the same Professor DeLong who repeats baseless accusations against other academics and then, when asked to substantiate his charges, selectively edits his comment threads and then dissembles about said editing when called on it." I believe it was George Bernard Shaw who said "I learned long ago, never to wrestle with a pig. You get dirty, and besides, the pig likes it." Hence, I agree with Larry that "a discussion with the likes of Brad DeLong is not productive." With luck, this'll be the last time his toxic style of intellectual thuggery and execrable personality will be mentioned in these pages.

Cause we're dying here. From reader "B" spotted in Roslyn Heights, NY: ...

How did Elizabeth Warren go from “not eligible” to “inactive” in Texas? (Update – As of 9/21/2012, Warren’s Texas license was on Administrative Suspension?)

Posted by William A. Jacobson on September 29, 2012 79 Comments
I really try not to read the comments in other blogs about me.  In the early days I did care, but I learned that it's generally not healthy. But when I saw that Volokh Conspiracy had a short post by Jonathan Adler about Elizabeth Warren -- VC's first foray into the issue, I believe -- I did read. It's still not healthy.  But one comment (by a commenter, not Adler) caught my eye, referring to a sentence in my original post about Warren's law license problem:

I recommend that people view Jacobson's posts with skepticism.... For example, Jacobson's very first post says "Warren’s Texas Bar information indicates she is not eligible to be licensed in Texas."   In fact, she holds Texas bar membership and has been paying dues, as an inactive member.  If she were not eligible to practice, upon payment of the higher dues required of active members, those very words -- "Not Eligible To Practice in Texas" -- would appear on her profile page as it now does for others.

Hmmm.  I have been meticulous in the facts I have reported about Warren.  It is true that Warren now is shown as "inactive" and has been inactive since 1992, a fact reported by Rob Eno the other day. So where did I get the idea that Warren was "not eligible"?  In my original post, I didn't include a screen shot of Warren's entry, just a link to the Texas Bar page which now says "inactive". But I did take a screen shot prior to my first post, I just didn't include it in the post.  Here is the screen shot taken on September 21 showing that Warren was listed as "Not Eligible To Practice In Texas":

I did not take a screen shot of the "click for detail" link on this page, unfortunately.

But here's what the same page looks like now using the same link:

In the time period since my first post appeared, Warren's status on the Texas Bar page changed.  And address information has been removed.
Read More

Saturday Night Card Game (She’s got an Obama Phone, and she’s proud. Deal with it.)

As long time readers know, I have been searching for a unified theory of race card players. It seems too simplistic to view people like Chris Matthews as liars.  It's not that they lie about facts, it's that facts are irrelevant.  Everything becomes racist or at least...

Why Throw Them Under the Bus When They Can Fall on Their Swords?

Just after the Benghazi attack on our consulate and the murder of four Americans, including our ambassador to Libya, I explained in a post titled Lack of Intelligence Community why I blamed our nation’s intelligence apparatus and not the White House for this colossal failure. Now...

In response to the New York City subway attacks by Mona Eltahawy, the Egyptian-American activist, the Metropolitan Transit Authority has now determined that it will change its rules to prohibit any ads that it "reasonably foresees would imminently incite or provoke violence or other immediate...

The attitude cultivated in America under one term of President Obama

Ignorance? Apathy? Mediocrity? All of the above? In a video taken outside a Romney rally, one Obama supporter shares why he won't vote for Romney. Pay close attention, because this is what happens when nearly every mainstream media outlet in the country is in the tank...

Every time some prudish librarian or school board wants to ban books that they consider inappropriate for children, elites sniff at the rubes’ lack of sophistication and anti-intellectual bias.  As you’ll recall, during the 2008 election it became a big campaign issue that as mayor...

How not to raise legal ethics issues as to a candidate

Starting with my post Elizabeth Warren’s law license problem last Monday and continuing through the week, I have laid out the facts and documents regarding Elizabeth Warren's practice of law from her Cambridge office over the course of a decade. I also have noted that Warren refuses...

Things you may have missed: Harvard Freshman Patronized by “Sensitivity Training” NYU Professors To Students – No laptop in class for you A Biochemist’s Argument Against  “Hooking-Up” Hugging is Out of Bounds at UNC? California Fires State’s “Professional Students” With a dash of irresponsibility thrown in: One Third of American Colleges are...

That, and free phones

From reader Dac: From Raleigh, North Carolina. Local GOP is jazzed for the election! ...

Mass Lawyers Weekly ran a reader poll today regarding the following question: Should U.S. Senate candidate Elizabeth Warren be investigated for possibly practicing law without a license? I heard about the poll in an email just after 1:30 p.m. today.  I did not publicize the poll because...

I'm not sure this qualifies for the "Ever" award (I'm still partial to this), but it is a fantastic commercial. Fantastic. Fantastic, and I almost put another word before that. The Murphy response? To criticize West's military record involving the now famous incident when he zealously interrogated a hostile. Good... 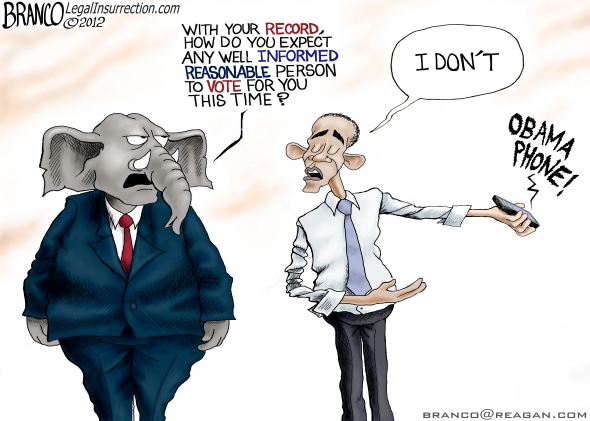 Note: You may reprint this cartoon provided you link back to this source. To see more Legal Insurrection Branco cartoons, click here. Branco’s Facebook page is Cartoonist A.F.Branco ...