I have posted about Elizabeth Warren’t Google search bar auto-fill problem both in the United States and Japan.

I recently discovered the Google Insights for Search tool, which provides information gathered by Google based on search terms  As opposed to the auto-fill problem, this doesn’t measure what links Google is returning, but what searches users are conducting.

I searched for “Elizabeth Warren” for the time period May – July 2012, which correlates closely with when The Boston Herald broke the story in late April that Warren was promoted as a Native American hire by Harvard Law School.

Here are the results for the terms associated with “Elizabeth Warren” during May – July 2012: 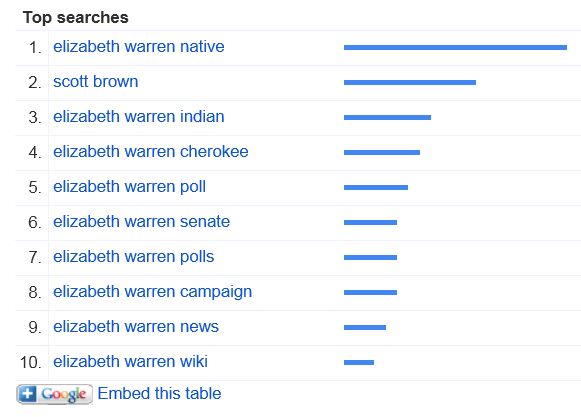 Here are the results for the rising search terms: 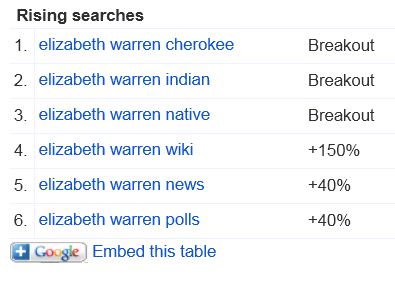 By contrast, the period January – April 2012 did not include anything related to Warren’s ethnicity as search terms.  (A search for “Scott Brown” during May-July turned up nothing unusual, with search terms focused on the campaign.)

Massachusetts also was the highest search region by far, followed closely by New Hampshire. There was no way to find out the correlation between Massachusetts searches and specific search terms because there was insufficient data within the last 90 days.

There is no reason, however, to expect that Massachusetts search users would differ meaningfully in the searches they conducted as to Warren, so there must be a lot of people in Massachusetts focused on Warren’s ethnicity and ancestry.

What does it all mean?

A reasonable conclusion is that Elizabeth Warren’s Native American / Cherokee / Indian problem, however you want to term it, has permeated deep into the public perception of Warren.

I would expect similar results if one conducted a word association test with the public — is there any doubt which words would come to mind?

Don’t take my word for it, just ask Google.

With Google voters should have no problem searching for a better candidate, a better way – a real American.

I think she needs to fly back home to Oklahoma, rush on over to Tahlequah and beg the Cherokee Nation for forgiveness. If she’d come clean, there might be some reconciliation. They might even help her recover. Lacking that, this ghost follows her as long as she wanders the path she’s chosen.

OK, I LOVE the image of Princess Running Bare being trailed around by this ghostly image with a moldy-made-in-Hong Kong war-bonnet made of turkey feathers and Oklahoma land crab shells.

Alternate explanation – efforts to induct Google as a member of the Vast Right Wing Conspiracy are paying off in spades.

Word has it that Warren has been secretly visiting a facial reconstruction specialist to highlight those ‘already high’ high cheekbones.

Neither ridicule heaped upon their chosen heir nor that heir’s own foolish behavior and looney, out-of-sync-w/-common-sense political positions will deter the ever steady Massachusetts liberal voters from their predestined duty – voting the straight Democratic ticket. Warren will get a sizable percentage of the vote.

I live here in the Commonwealth and I see it daily. It is hard to believe that this was one of the original 13.

Someone once said that it would have been better if Plymouth Rock had landed on the Pilgrims instead of the other way around.

I am not an expert on DNA testing (I have taken three myself) and have read that it is possible that Warren could prove her linage back to a Native American ancestor by taking a simple DNA test.
Question is: Has she taken a DNA test and if she did what was the results?

Off topic but in the ballpark:

Whose Senator does Elizabeth Warren plan to be, yours…or Hollywood’s?

2. On July 19 I got an email from the Brown campaign. Extracts follow:

What do actresses Charlize Theron, Sally Field, Kyra Sedgwick, Kate Capshaw, and Reese Witherspoon have in common? Here’s a hint; it’s the same thing that actors Edward Norton and Tobey MaGuire share. Singers Barbra Streisand and Peter Yarrow of Peter, Paul and Mary fame are part of the fan club as are directors Aaron Sorkin and Richard Donner.

They’re all big bankrollers for Professor Elizabeth Warren who raises money like she wants to be the first United States Senator to represent Hollywood.

It’s easy for the Hollywood elites to support Warren. They won’t be put out by the 700,000-plus job losses the respected accounting firm Ernst & Young says Warren’s small business tax hike plans will cause.

But the rest of us will.

That’s why I need your help again.

Over 65% of the money Warren has raised comes from out-of-state, and Hollywood’s “Hurrah for Warren” Love Fest will keep going strong for another 110 days until Election Day. Why? Because she will represent them and not YOU!

Only you can help me combat the millions Professor Warren is raising, but more importantly, it’s up to us to stop her job-destroying small business tax hikes that we now know will cost America more than 700,000 jobs.

If the Brown campaign does read this site, the most important advice I can repeat is the importance of mending fences with the MA Tea Parties. The energy and commitment of Tea Partiers is by far the best bet to offset the deep pockets of Hollywood and a Democrat Establishment that is determined to put the MA seat into radical hands (and would like to put Warren into the White House).

Giving the cold shoulder to activists who got him elected was a horrible blunder by Brown. (Be good to the people you meet on the way up, etc…) He had best take the chance that Tea Partiers might let bygones be bygones in order to defeat a dangerous toxic radical like Warren—but it’s up to him to win them back.

The willful stupidity of people in Hollywood is truly an amazing phenomenon.

But maybe it’s always been like this: creative people being overly emotional, fawning over each other with awards, earning ridiculous amounts of money for very little work and having a warped sense of superiority that only the shallowness of fame can bring.

The key thing here is so many of them are self-loathing from the guilt of truly knowing their worth is nothing of how the public perceives them. Hence, their leftist extremism to alleviate it, and the leftist group-think that assuages their insecurity to have an opinion on their own.

(Hey, not bad, huh? Do you have a psychological problem you can’t figure out? Let me know!)

The “Hollywood Elite” do it because they can have their pictures taken with a “real” United States Senator or President. Everything else is BS to them.