As previously posted, Elizabeth Warren has a Google search bar auto-fill problem.  Almost every term which shows up in auto fill has to do with her Cherokee problem and claims to be minority and Native American.

But there is a solution.  Move to Japan.

Google has been ordered by a Tokyo court to remove auto-complete results that link a man to crimes he says he didn’t commit.

“He lost his job, and has had other job offers rescinded, likely because of this association.”

The search giant likely links the man’s name to the crime terms because a false story about him containing allegations apparently spread across various sites, which were then indexed by the search giant, Tomita said. The man says he has no knowledge of the types of crimes that appear.

Google did not respond to a request for comment on this case. The company has faced similar cases in other countries and has usually responded with the defense that it is not responsible for the results, as they are automatically generated, though this defense has not always succeeded. The company does screen some terms from its auto-complete feature, including pornographic words.

Her Google auto-fill search terms actually fit, so Google can’t be forced to acquit her.

Update:  I decided to see if Warren in fact did have a Google search bar auto-fill problem in Japan, and it appears she does in the general search bar (I couldn’t get the news search bar to auto fill): 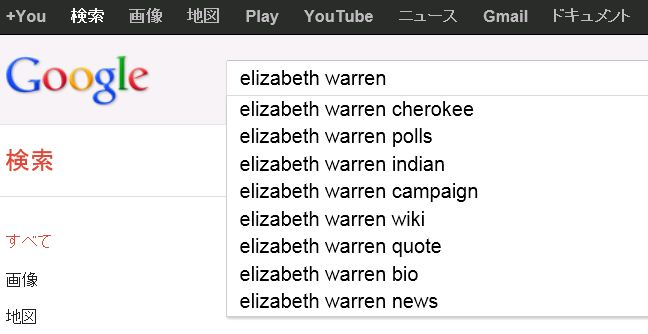 Her Google auto-fill search terms actually fit, so Google can’t be forced to acquit her.

LOL, I see what you did there. Can we get Kato Kaelin to testify?

Does “auto fill” have anything to do with “getting hammered”?

I am sure she would claim she was Japanese if she thought it would help her someway.

Don’t give her any more ideas … given the “land bridge” theory of Asian Migration to North America, she just might try it. Just sayin’….

So tragic for Elizabeth Warren…

“Kookie, Kookie, lend me your comb!”

Interesting image results if you enter her name in Japanese, though. エリザベス・ウォーレン

Update: I decided to see if Warren in fact did have a Google search bar auto-fill problem in Japan…

Not so sure you were searching from Google servers in Japan, but merely searching in Japanese via Google’s US servers.
IOW i believe you may have to physically be in Japan.

Try entering 1/32 and there are some Warren based results also.

(I couldn’t get the news search bar to auto fill)

Google News search has been kind screwy for awhile, you have to put the search term in Google search>>hit enter>>click News on the left hand sidebar (not the top)>>hitting space bar in search box at the end of search term should activate auto-fill suggestions.

Japanese auto-fill prob for Warren is that she’s not Accura and needs a Lex-us.

This is interesting because both “Hiroyuki” and “Tomita” are common names in Japan. One of Japan’s most famous gymnasts is named Hiroyuki Tomita, as a matter of fact.

It’s hard to believe someone would be fired on this alone.

Dizzy Miss Lizzy said she wanted to find other people just like her so she should be happy and thank the good Professor, who one day might be auto-completed as “Right-Wing Extremist.”

How about searching “Obama is a bogus fake and a liar.”

That should be all covered under SCoaMF

l note in your L Graas link above referancing your endeavor here ; further in is a link to Michelle Malkin re: the other big story where N. Pelosi accuses the GOP of starting a fight with E. Holder over F & F in order to derail E. Holder in his investigation into GOP voter suppression efforts. A point of order re : ‘Fight’ & ‘Suppress’. ‘Fight’ is often associated with ‘Fist’. Observation: N. Pelosi is such a consumate fool she would be incapable to ‘Supress’ a ‘Fist Fight’ among a group of Lesbians. Tis truly the ‘Silly Season’.

A reset of the old children’s “Tonto Lost His Underwear Song”:

Hi-ho Obamacare,
Lizzy lost her mind somewhere!
Lizzy say, “Me no care,
“My head was always full of air!”

Disclaimer: This sophomoric re-rendering of a child’s rhyme is the product of the chemically altered mind of a fellow Oklahoman, who unlike the rhyme’s subject, is comfortable with being the progeny of good, honest and hardy, yet poor, European and Indian ancestors. Furthermore, due to unique genetic properties of the aforementioned Indian DNA, the writer of this rhyme is somewhat under the influence of a small amount of drinking alcohol – demon rum – (single malt Scotch, actually), administered after work to the writer by the well-intentioned offspring of European settlers of the American west. Thus said writer of this rhyme is not, nor will he ever be, responsible for this post, irrespective of the ingestion of a mitigating quantity of rice, red beans, cornbread and mustard greens. Go Sooners, beat Texas. Tomorrow is the longest day of the year, so beware of hippies humping your leg as you stand in line at Starbucks. The designated hitter sucks; lazy-assed, crybaby pitches should bat like the rest of us. Not valid after November 31st.

Hey Trooper, I liked your poem…here’s a chance to promote my own silly Granny Warren ditty, and recipe:

The recipe was perfectly well-done. The “Pound table” really got me. And the poem is worthy of being put to music. From the vote counts on the recipe, it looks like the Lefties been trolling your site! When I tried to click the ‘thumbs-up,’ I ended up on the Boston Herald page about Lizzy’s recipes!

1. The following is OT but in the ballpark (HT Instapundit).

The lawsuit’s major claim is that the formation and operation of the Consumer Financial Protection Bureau (CFPB) violates the constitution because its director (or czar) is not accountable to Congress or the President, and the decisions of the agency are not even subject to judicial review.

We know whom Warren had in mind to head the agency which she designed to be unaccountable to the executive, legislative, and judicial branches of government.

This is of a piece, and more serious than, Warren’s gaming of affirmative action.

I do believe that MA voters should be informed of how Warren’s mind works. People in Harvard’s zip code will love it; in the rest of the state, maybe not so much.

Scott Brown voted for Dodd-Frank so he too has some splainin’ to do. But not nearly as much as Warren.

2. Once in a while Glenn Reynolds reminds us that (iirc) he is a preacher’s son:

Let me be clear. These people are not well-meaning do-gooders who have just gone a bit too far. They don’t actually “mean well” at all. They don’t mean well, they mean to be in control. They are power-fetishists, drunk on the joys of bossing the little people around. They are not good people. They are evil. They should be ashamed of themselves, but shame — like taxes — is for the little people.

Here is the CFPB site. It deserves deeper examination than I have time to give.

It is appalling that an agency with such an open-ended charter would be created deliberately without checks and balances.

i thought that I had heard it all on Princess Spreading Bull, but you guys have raised it to a new, higher level.
How about something on Fast and Furious? This is a national scandal in which TWO American Federal Agents were murdered because of Holder and Obama.
It was not a “botched operation” as so many are claiming, but an operation intentionally designed to falsely claim that gun dealers were selling semi automatic weapons to straw purchasers who in turn sold them to Mexican drug dealers. This, it was expected, would start a public outcry against the sale of these types of weapons and be justification for Obama, Holder and the democratic “gun grabbers” to demand legislation banning their ownership of semi automatic weapons. THAT WAS THEIR GOAL.

Yeah but, b b Bush had the worst job creation record of any president… even though he inherited dot com crash and 911.

-blood in the water