Travis Bickford landed on the FBI watch list after his mother and aunt told authorities about statements he made “indicating a desire to go fight in Afghanistan alongside Islamic militants.” 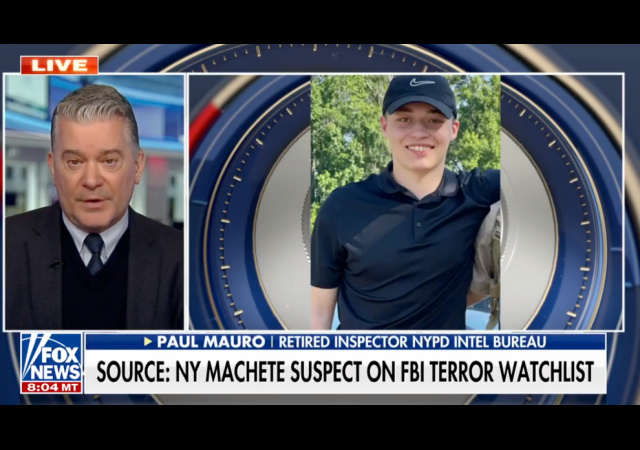 Authorities charged Travis Bickford, 19, of Wells, ME, with two counts of attempted murder and two counts of assault, for allegedly attacking New York City cops with a machete on New Year’s Eve.

Bickford stands accused of approaching Officers Louis Iorio and Paul Cozzolino “near a post where cops were screening revelers for weapons” for the big New Year’s Eve party in Times Square.

The machete attack left Iorio with “a gash to the head.” Cozzolino had a fractured skull.

Thankfully, Iorio and Cozzolino left the hospital on Monday morning.

Bickford is also accused of striking officer Michael Hanna. He did not sustain serious injuries and shot Bickford in the shoulder and stopped the attack.

Law enforcement officials told The New York Post that Bickford landed on the FBI watch list after his mother and aunt told authorities about statements he made “indicating a desire to go fight in Afghanistan alongside Islamic militants.”

However, the feds have not charged Bickford:

“I want to be clear that the FBI, through the Joint Terrorism Task Force, is working very closely with [NYPD] to determine the nature of this attack,” the FBI’s Michael Driscoll said at the Sunday news conference. “And we will run every lead to ground. I also want to be very clear, as you’ve heard said tonight previously, this is very much an ongoing investigation so our ability to talk about specifics is limited.”

Bickford is from Wells, Maine. I am outside the address confirmed to be his family’s from neighbors. FBI agents are outside the home right now @newscentermaine pic.twitter.com/xX0JnUowfy

Sources said officers found a receipt on Bickford for a “donation to the Bowery Mission to satisfy the Muslim tenet of ‘good deeds.'”

Bickford allegedly had a diary with him stating he wanted to join the Taliban in Afghanistan and die as a martyr. He also supposedly had a letter with him, urging “his family to ‘repent to Allah’ so they ‘may be taken out of the hellfire.'”

“To my family — specifically, mother — I’m sorry for not having been a good enough son,” the note read, according to a police source.

“I fear greatly that you will not repent to Allah,” it said. “And therefore I hold hope in my heart that a piece of you believes so that you may be taken out to the hellfire.

Addressing his other brother — who sources said is in the Marines — the suspect allegedly wrote, “To Devon, there was a time when we were close, but that time has passed. You have joined the ranks of my enemy. And for that I can give you no kind words – return to Allah.”

Reports noted Bickford “found religion” after his father died of an overdose in 2018.

Others claimed Bickford wanted to attack those he considered an “enemy of the state”:

The 19-year-old alleged Islamic radical suspected in the New Year’s Eve machete attack on NYPD cops had specifically sought to target “a uniformed officer” or someone armed because he believed them to be an “enemy of the state,” sources told The Post on Sunday.

Trevor Bickford, of Wells, Maine, allegedly went to Midtown on Saturday night to assault police officers or “someone with a gun,” the sources said he told the feds after his arrest.

The suspect allegedly said he’d hatched the plot as recently as Friday, according to sources.

Unless someone can show that he made his plans in a way the FBI could have picked up on it, social media posts as an example, this story is a little bit unfair to the FBI with the implication that he could have been stopped.

No fan of the FBI but even I have to admit they can’t follow everyone on a watch list around. Especially a low level brat like this kid.

(makes me ill just having to write that LOL)

Yeah, especially when they’re busy tracking Domestic Terrorists like mothers who are angry that teachers in public schools are trying to convince little Billy to surgically mutilate his genitals.

The FBI might have a few more resources to follow guys like this if they weren’t workin so hard telling Twitter what to do. That’s what you get from The Patriot Act Chimera blending internal and external apparatus for “homeland security.” They get busy on the higher-profile stuff.

You cannot take a cheap shot at the FBI. They have been a criminal enterprise since the first day J. Edgar Hoover showed up.

And, he was brought in to clean up an already corrupt and incompetent department.

Hoover’s main accomplishment were dossiers of those in power who could harm the bureau, and to build up a roster of puppets in media to put a bright shine on his fiefdom. Example: Walter Winchell.

If a watch list can’t notice people we otherwise can’t, to watch for harm emerging without harming the false positives in the meanwhile, what good is a “watch list?” Besides being a predicate for deeper fishing, and fodder for sliming by leak, I mean.

In practice these watch lists are two-fers. Does nothing useful, while generating political fodder & patronage jobs, with the pretense of doing something, and blocking anything that might inconveniently work

Every mechanism for helping “the people” will be implemented for the operators to help themselves at our expense, absent transparency and utter vigilance on our part. It follows that any mechanism installed without visibility and oversight will go sideways … as we have seen.

Wait a minute, another weirdo known to the ‘authorities’? No way! We are reliably informed that our govt at all levels, in close coordination with the private sector, monitors social media to identify threats to the public. The list of known wolves act with violence grows longer.

Perhaps we should ask our ‘authorities’ just what the pay off in terms of quantifiable results are for the taxpayers dollars spent and liberties trampled along the way?

When every American is under surveillance and on the FBI watch lists, the lists mean nothing.

The losers at the FBI are too busy cooking up entrapment schemes for the DNC’s enemies.

Another guy on a watch-list goes on a rampage the watchers didn’t stop, or even try.

One wonders what these “watch lists” are for. Besides stopping that renown domestic terrorist Senator Paul from flying freely.

It’s like gun laws for the Dems: you write increasingly more stringent and repressive gun laws, fail to enforce them, and repeat, until you get the level of gun laws they like, THEN they enforce them.

It’s all a “we tried, but the law wasn’t strong enough, so we have to spend more money, write more laws” excuse.

What “watch lists” are for: So the Fibbies can _watch_ someone commit crimes while they spend five years building a huge case with a multitude of defendants to impress the news media (until it comes out that most of the conspiracy was driven by informers). No police agency is legally required to prevent crimes, but the FBI goes much further with not letting arrests or other crime interfere with a newsworthy “investigation”.

This brings to mind an Andy Capp strip. His wife has dinner on the stove. “Watch that pot; I’m going to the ships.” Several minutes later the pot is boiling over and the contents are burning. Flo comes back, sees the mess. “I asked you to watch that pot!” Andy (FBI) replies, “I did. It boiled over at 5:17!”

Robin Hood : Men in Tights
Robin Hood : [fighting the Sheriff of Rottingham’s men] Watch my back!
Ahchoo : [literally leaning over and watching his back] Your back just got punched twice.
Robin Hood : Thank you!

Islam is a death cult that is far far more than a mere religion. Islam is an all-encompassing way of life that includes governance, legalities, economics, morality and defines how a society MUST conduct itself. Islam is worse than Stalin, Mao and Hitler and their methods of brutality combined.

Moslem adherents will deny that but Islam is still here advancing and murdering across the planet. All Western countries better wake up to the extreme threat of advancing Islam and repel the barbarian hordes while ousting every Moslem within our sacred lands.

Ask Sweden, or France, or Italy etc. Poland got it right (and the EU is pissed).

Importing crime and murder is a lesson for our immigration policies.

You can swear allegiance to a hostile ideology whose purpose is to destroy our Rights and Freedoms but we can’t and won’t do anything to you — even after you kill for it. Otherwise, you’ll be hounded to your grave by Obama’s hypercorrupt Feral Board of Inquisitions

Pick your mental illness – you men are either girls trapped in a boy’s biology, or an Afghani freedom fighter trapped in a privileged, CIS male, Caucasian, Constitutional Republic.

She was a good watch dog. If a burglar broke into our house she’d indeed watch them…as they broke in, as they stole stuff, as they exited the house.

She’d be a good watcher.

I suspect that the total utility of the “.lists” is simply its usefulness to sigint;

When Bad Guy A phones Bad Guy W on a tapped line, Bad Guy W gets a flag because he’s on a list. No action, just a notation in a computer file.

These mass murderers are just numbers in a file to the FBI, well beyond the Bureau’s main focus, which is defending the government from its citizens.

This is a difficult one for me as I oppose the concept of classified extra judicial “watchlists” on US citizens in the first place, yet I understand why they could be important to public safety.

On the other hand, they have proven to be anything but properly useful. Both for the incredible difficulty of actually maintaining and utilizing the data for what it was authorized for and the propensity for the authorities to use them for things they weren’t authorized for.

Yeah, they can track down a tourist farmer from Iowa who happened to be standing outside the Capitol on 6 Jan, because that’s what their masters told them to do. But a youngster turning to the murderous whacko side? Nah, he’s got rights you see.