It’s time to have an honest, science-based discussion on whether the mandate should have ever been imposed on the military in the first place. 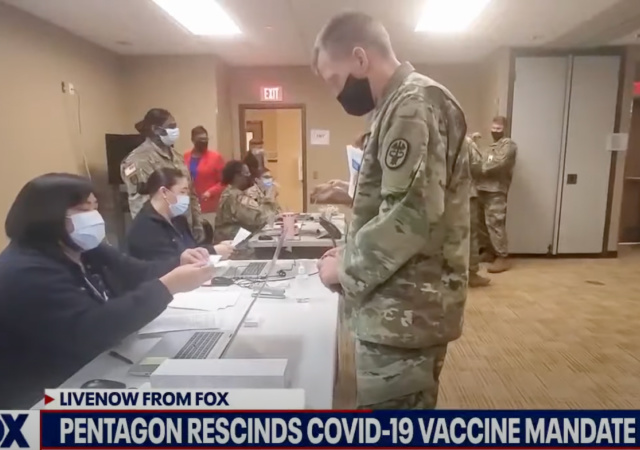 Defense Secretary Lloyd Austin has officially announced that the Pentagon is formally dropping the covid vaccine mandate for troops.

President Joe Biden signed a defense policy bill just before Christmas that included a provision cleared by the House and the Senate to repeal the administration’s military vaccine mandate.

The National Defense Authorization Act terminated the COVID-19 vaccine for military members but did not reinstate those who were discharged or had their benefits cut for refusing the vaccine. Reinstatement has become a priority for some Republicans who said the strict mandate is among the reasons why military recruitment is at an all-time low.

The legislation gave Defense Secretary Lloyd Austin 30 days to rescind the vaccine mandate. The Defense Department had already stopped all related personnel actions, such as discharging troops who refused the vaccine.

The punishing of those refusing the vaccine ends, and those discharged can petition to revise their record. There is no word yet on whether discharges would be reversed.

Those who refused to get vaccinated and received a general discharge can petition the Board of Corrections for Military Records to revise it, although the memo does not say what the correction to the record could be or whether those discharged could rejoin the military.

I must note with sorrow that the same day the mandate was rescinded, a U.S. Air Force Academy cadet passed away on the campus of a “medical emergency.”

The Air Force Academy said offensive lineman Hunter Brown died after experiencing a medical emergency as he left his dormitory for class Monday. He was 21.

Brown was from Lake Charles, Louisiana. The Cadet 3rd Class played in games against Northern Iowa and Nevada during the 2022 season.

…Academy first responders were called and attempted life-saving measures, according to the school. Officials with the Air Force office of special investigations, along with the El Paso County sheriff´s office, secured the area and are conducting an investigation

As my son is a cadet at that institution, I think Legal Insurrection readers can imagine how I felt when that headline crossed my screen.

I must stress that there is currently no cause of death that has been determined. And indeed, young people do (albeit rarely) die unexpectedly from various causes.

However, I want the U.S. Air Force Academy to be honest and transparent about what happened to Cadet Brown. I speak from experience…the young men and women selected to attend the Academy must be medically evaluated and regularly prove their physical fitness in tests. Cadet Brown was also a football player and was likely more robust than most other cadets.

We have recently explored the #TwitterFiles related to covid and the vaccine. Twitter executives rigged the debate on covid policy with help from the White House. As former New York Times reporter Alex Berenson explained, Dr. Scott Gottlieb, President Donald Trump’s Food and Drug Administration (FDA) commissioner and sitting board member of Pfizer, complained about a tweet from a well-qualified expert on the benefits of natural immunity. The tweet was then labeled “misleading.”

How could a sensible and safe vaccine policy be developed without all information?

A recently published study in Circulation focused on young people to find significant differences in the levels of spike proteins, a cytokine indicator.

In the study, published in the journal Circulation, the research team recruited 61 adolescents and young adults: 15 that developed myocarditis after being given the Pfizer BNT162b2 or Moderna mRNA-1273 COVID-19 mRNA vaccines, and 45 healthy, vaccinated and age-matched volunteers. The researchers then screened blood samples from the participants to profile their immune system, including testing for autoantibodies and antibodies against human viruses, analyzing T cells and measuring blood levels of cytokines and SARS-CoV-2 antigens such as the spike protein.

The authors argue the benefits of covid vaccination still greatly outweigh the risks. I might agree if the young people vaccinated were obese, had severe asthma, or suffered from another co-morbidity.

However, our military members and those in the military service academies are typically not suffering from chronic conditions, which would mean vaccinating against a disease that causes severe cold symptoms would NOT alleviate risk significantly.

I will also note that Florida’s Surgeon General Joseph A. Ladapo recently issued a warning to young men receiving covid vaccines, based on an analysis by the state’s health department that indicated they pose an “increased risk” of cardiac-related death. How many other voices have been silenced, challenging the need for a vaccine mandate?

Finally, let’s admit the vaccine mandate has failed to stop transmission or infections. Vaccinated and boosted Austin and Joint Chiefs of Staff General Mark Milley suffered from covid. The massive vaccination campaign may have led to the generation of more transmissible variants.

The men and women in the U.S. military are prepared to make the ultimate sacrifice for the other citizens of the nation. They need to know we have their back and that policies implemented by our military bureaucrats are based on sound science and effective military tactics.

It’s time to have an honest, science-based discussion on whether the mandate should have ever been imposed on the military in the first place. And we must have the free speech necessary to conduct real science if another pandemic arises.

“and those discharged can petition to revise their record.”

And just like the exemptions, they will be 100% denied.

With regards to the Air Force cadet, this kind of crap DOES NOT HAPPEN before 2021. We had a death in my class at Annapolis, but that was a freak skydiving accident.

The idea that a healthy 21 year old athlete just casually drops dead is ‘normal’ is INSANE.

I know someone that was friends with that midshipman and had a really hard time with her death.

Just heard of a 6 y/o dropping dead, 2 teens from North Texas Charter school dropped dead, a teen just had a stroke ,
Might survive, long road ahead for her

Thin is ALL the clot shot

It doesn’t help anybody, it’s all
A lie

We see a lot of commercials for class action suits against the military for Camp LeJeune.

I’m willing to bet we’ll see the same for forced vax mandates under Nurembourg violations and a few constitutional clauses.

And for once, I’ll be on the side of those land sharks.

In July 2021 when the group of Democratic Texas Delagates — all vaccinated— came to DC and became infected with Covid it was obvious that the vaccination prevented neither infection nor transmission of the virus.

The vaccination was/is effective for decreasing serious infections, hospitalizations and deaths from Covid. Since the majority of serious infections have always been among the elderly and those with underlying medical conditions all efforts should have been to target these individuals for vaccination.

Any mandates, imposed by either the government or the private sector, threatening loss of employment for those choosing not to be vaccinated made zero sense once it was apparent the vaccination didn’t prevent infection or transmission. These mandates targeted workers, who were, for the most part, particularly in the case of the Military, younger and healthier individuals and at much lower risk for serious consequences of Covid infection. Most people at highest risk, the elderly, were retired.

That anyone should suggest that the vaccination mandates had any basis on science is ludicrous.

OH Leslie,, I remember your son was a cadet, I remember the handsome young man, in his uniform.. I have questions too,, but,, all I can say is that I hope he stays safe. This must have been a very difficult story to tell.

As you said, we don’t know.. we may never know.. but it is only human to wonder and to worry.

Vaxxxines by hook, crook, and force.

The more traditional vaccine from Novavax, now, finally EUA-ed in the US, is damn hard to find. They’ll only 8consider* giving it to you with your doctor’s explicit direction, only *because you had an adverse reaction to the mRNA jabs.”

In case it isn’t clear: you aren’t making your own health care decisions — I want that jab, not the other because that’s what I want, and neither is your doctor — this is the prescribed treatment because I prescribed it.

Technicians operating on the livestock — the herd isn’t managed for the jab-er’s or the jab-ees benefit.

Here’s an adverse reaction for you:

“I got the frakking rona — so say your tests — after getting jabbed per protocol. Maybe some other vax technology will work better; how about we try that? And you can butt the hell out, as you are clearly less interested and less competent at securing my health than I am. Any questions?”

Don’t forget those people who were not in the military who had to deal with the pressures of getting the vaxx IE civil service because where they were stationed at overseas. I went through hell because NOBODY on the military side would help with exemptions because the only doctors we could see were military. So by defacto civilian workers were also subject to the mandate on top of the EO mandates. By the way the vaccine mandate is still in effect for most civil service but has not been “enforced: for several months. This is the main reason why I walked away was because of this stupid crap.

Maybe now they’ll get rid of those stupid masks as well. I can’t image having to go through basic training with those useless things.