Alex Berenson was booted off of Twitter for his vaccine-questioning analysis. His new #TwitterFiles put the focus on Gottlieb, who is a sitting board member of Pfizer. 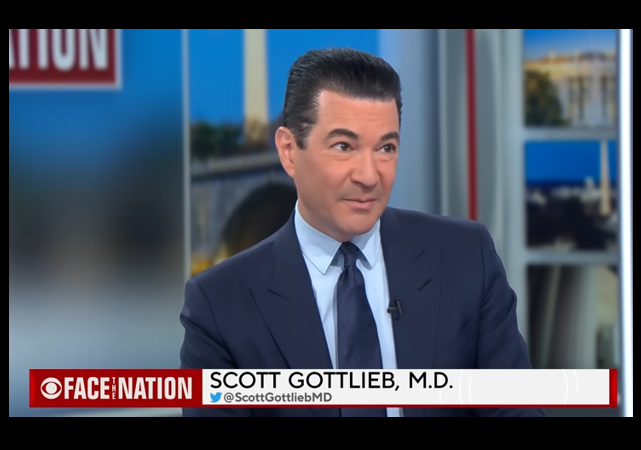 In August 2021, author and analyst Alex Berenson was permanently banned from Twitter for challenging the media and the current administration’s narrative about the COVID-19 vaccine.

The former NYT writer sued Twitter for the ban.

Karma has now smiled on Berenson, who Elon Musk, the new Twitter CEO, tapped to cover the social media platform’s handling of the information exchanges related to the covid vaccine.

“This is the kind of stuff that’s corrosive,” Gottlieb told O’Boyle. “Here he draws a sweeping conclusion off a single retrospective study in Israel that hasn’t been peer reviewed. But this tweet will end up going viral and driving news coverage.”

2/ In August 2021, Gottlieb told Todd O'Boyle – a senior manager in Twitter's public policy department – that a tweet from @drgiroir claiming CORRECTLY that natural immunity was superior to vaccine immunity was "corrosive" and might "go viral."

It’s important to note that Dr. Brett Giroir is a physician who briefly followed Gottlieb as FDA head. Furthermore, Giroir’s tweet encouraged people who did not have a natural immunity to “Get vaccinated!”

4/ In October 2022, @scottgottliebmd claimed on Twitter and CNBC that he was not trying to suppress debate on mRNA jabs. These files prove that Gottlieb – board member at a company that has made $70 billion on the shots – did just that.

Dr. Gottlieb never requested that the tweet in question be labeled as “misleading,” yet it was despite not being in clear violation of any Twitter policy at the time.

Mr Berenson argued that Dr Gottlieb’s motivation for quashing the tweet, which cast doubt on the necessity of the vaccines, was financial. In saying that natural immunity through prior exposure to the virus was superior to that conferred by the vaccine, Dr Brett Giroir was placing Pfizer’s sky-high profits in jeopardy.

Dr Gottlieb’s financial ties to Pfizer were not flagged in internal emails regarding the tweet.

He was spoken about by execs at the social media company as ‘the former FDA commissioner’, but not a Pfizer stakeholder who would be affected by waning vaccine uptake.

It's now clear #COVID19 natural immunity is superior to #vaccine immunity, by ALOT. There's no science justification for #vax proof if a person had prior infection. @CDCDirector @POTUS must follow the science. If no previous infection? Get vaccinated! https://t.co/jFc0yHpF2f

In his Substack piece, Bereson explains Gottlieb’s financial ties to Twitter and Pfizer’s fiscal interest in good publicity for the vaccine. He asserts this is the motivation for complaining about tweets highlighting the effectiveness of natural immunity.

By suggesting some people might not need Covid vaccinations, the tweet could raise questions about the shots. Besides being former FDA commissioner, a CNBC contributor, and a prominent voice on Covid public policy, Gottlieb was a senior board member at Pfizer, which depended on mRNA jabs for almost half its $81 billion in sales in 2021. Pfizer paid Gottlieb $365,000 for his work that year.

…Gottlieb is not just a Pfizer board member.

He is one of seven members of the board’s executive committee and the head of its regulatory and compliance committee, which oversees “compliance with laws, regulations, and internal procedures applicable to pharmaceutical sales and marketing activities.”

The selective disclosure of my private communications with Twitter stokes the threat environment. So does actions that empower people who’ve shown little restraint when it comes to purposeful vitriol. It instigates more menacing dialogue, with potentially serious consequences 👇

The US Court of Claims is going to be very busy with the vaccine injury cases.

They would be if the federal government hadn’t given Pfizer and the rest complete immunity from lawsuits for the damage that their mRNA gene therapy serum causes. So expect all those claims to be quickly dismissed.

They have been protected against lawsuits, due to injury, but not those dealing with fraud

Wade is correct that the liability immunity is for harm from the vax. Health care workers, clinics and hospitals are similarly immunized for the negative effects of the vax. However, that doesn’t cover any other aspects of the vax administration nor relieve anyone or any entity of the other required safety protocols and disclosure protocols.

For example, a health care provider couldn’t claim immunity from liability if they used dirty needles. Similarly the patients must have been provided data to make an informed decision aka informed consent. Where data wasn’t provided pro and con, IMO, no informed consent could exist b/c the conditions for such consent; info/data re the potential con of the bad were not provided where they were known.

It’s now thought by many anthropologists that humans have an inborn sense of fairness. One corollary of this is that if they can’t get justice from government, they often seek it independently.

If these corporations do prove to be immune from lawsuit, how immune will they prove to be from molotovs and pipe bombs?

Take that video of the taqueria shootout, in which many of us “jurors” were willing to let Baldy walk, despite the clear law. Now. label the dirtbag “Pfizer.” What, if anything, does this change?

And if anyone doesn’t realize at this point that the FDA is compromised and is in the pocket of the big pharmaceutical companies their nuts. Big Pharma owns the FDA lock, stock, and barrel. They haven’t been about protecting the people and ensuring safe and effective medicines for decades. But there we go and here we are.

At this point, we should all just assume that information put forth on twitter or any other social media: (1) is not necessarily true, despite its ubiquity; and (2) is just the “truth” that the elites want the hoi polloi to hear.

Indeed. It appears now that Twitter was pretty much everybody’s whore.
Well, everybody in power. Certainly not yours or mine.

“In the past, I’ve raised concerns with Twitter related to the safety of me and others, and threats being made on the platform.”

Aw. Cue the requisite “Hitler in the bunker” video, with subtitles of Hitler complaining that the latest Allied press “directly threatens the safety of me and others in my marginalized community.” That’s the entire point of the thrust, you godawful monster, and you have no one to blame for it but your own earlier actions.

When transparency is what “threatens your safety,” maybe you need to reconsider your role.

Yes, but we can’t read Facebook’s secret diary… yet.

All of government is compromised. ..

Gottlieb with the go-to, leftist response: sunlight exposing any malfeasance is violence. I’m surprised he didn’t use “stochastic terrorism”. I loathe these people.

“The selective disclosure of my private communications with Twitter stokes the threat environment. So does actions that empower people who’ve shown little restraint when it comes to purposeful vitriol. It instigates more menacing dialogue, with potentially serious consequences 👇”

What a weird “contests of the Archons” bibe when people go off like this. Abstract forces inovked by the naivve, operating in their spheres, to the resonance of the eminations, blah, blah, blah.

These doctors make me sick.

You need to see Dr. Jill Biden. She’ll kiss you where it hurts.

I wonder if the Kool-Aid drinker that argued with me about this last week can read this.

The fall of 2021 (?) I wrote the county health czar several times concerning natural immunity, when they banned the unvaccinated from restaurants and were threatening the same for grocery stores. I was able to show from data the board of health published through the county web site, that the vaccinations were failing to protect from infection and transmission. When the czar and BOH refused to respond, I took it to the news paper and the editor rebutted me in print after my letter with boilerplate Covid propaganda. Going back over a year, the editor had never responded to a letter in print so I confronted him in private email, wherein he sort of apologized and promised to take my letter to the czar for answers.

No doubt the editor did as promised, since the czar and BOH revamped the county web site to suppress the data I used to prove their hypocrisy. Ultimately it took a lawsuit from restaurant owners and months of negotiation with the BOH to rescind the restaurant order – which at the time of Omicron, became painfully obvious the vaccines were useless … but oh the fight to keep their new found power.

It was particularly maddening when a surgery my wife had been waiting 3 months for at Seattle Swedish, was cancelled 2 days prior for the Omicron scare – so I arranged to have it done for her in Tampa at the Norman clinic. We got a call from Swedish to reschedule while we were en route to Tampa. Yeah, sorry, you lose.

I’d really like to see all the Covid propagandists and profiteers prosecuted, jailed, and financially ruined.

Tied to Pfizer? They’re joined at the hip.

Gosh, Gottlieb never asked Old Twitter to ban his political and professional opponents – he only targeted them with descriptive-incendiary language when ratting them out to censors.

He’s a T.V. propaganda doctor posing as a disinterested third party which happens to be precisely what he’s not. And major news media corporations encourage this sort of behavior.

The screenshot accompanying this post makes him look like a botox-puppet – all of these people are 21st century versions of 18th century royal courtiers and hangers-on.

It still amazes my how the Leftists all dove in to protect Big Pharma Fake Vax. To a man it was all empowering like they all had a stake in the company they had to fight for it.
It’s either hive mentality or brain washing campaign to the perfect degree.

Leftists are hive beings. “Union.” “Solidarity.” “Bloc votes.” Scared little conformists. For every Krysten Sinema or Tulsi Gabbard there are 50 million Brian Stelters. And I don’t even trust Sinema or Gabbard.