“I think it is a remarkably shortsighted and, candidly, selfish position, and I don’t understand where they’re coming from. McCarthy has agreed to every policy they’ve asked for.” 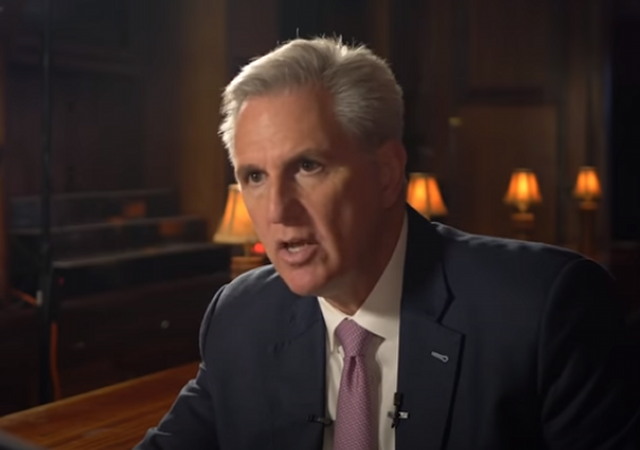 The vote for Speaker of the House is today, and Kevin McCarthy is still down five votes. He moved into the Speaker’s office, too.

Five Republicans already said they would not vote for McCarthy on Tuesday:

Over the weekend, Newt Gingrich blasted the House members who aren’t supporting McCarthy.

NEWT GINGRICH: I don’t understand what they’re doing. They are not voting against Kevin McCarthy, they are voting against over 215 members of their own conference. Their conference voted overwhelmingly, 85%, for McCarthy to be the speaker. So this is a fight between a handful of people and the entire rest of the conference. And they are saying they have the right to screw up everything.

Well, the precedent that sets is, so do the moderates, so do the members from Florida, and I mean any five people can get up and say, “I’m going to screw up the conference, too.”

The choice is Kevin Mccarthy or chaos, and there’s nobody going to replace Kevin, because he has far more people totally dedicated to him than this handful of never-enders. And the result is going to be anybody who tries to replace Kevin will face total chaos and it will be impossible to govern. So I hope in the next 24 hours that this handful of members will realize that they don’t have the moral right to reject the choice of 85% of their conference. They don’t have the moral right to break up the House against the wishes of over 215 fellow Republicans. I think it is a remarkably shortsighted and, candidly, selfish position, and I don’t understand where they’re coming from. McCarthy has agreed to every policy they’ve asked for.

For his part, McCarthy has reached out to the conservative holdouts.

Rep. Kevin McCarthy, R-Calif., is making a final bid to convince the right wing of his party to support his speakership, making major concessions to the group ahead of Tuesday’s vote.

McCarthy’s central concession is allowing for any five Republican representatives to force of vote of no confidence in the speaker. He also vowed to end the practice of proxy voting and virtual participation in hearings, requiring lawmakers to be in Washington to participate in hearings and votes.

“Just as the Speaker is elected by the whole body, we will restore the ability for any 5 members of the majority party to initiate a vote to remove the Speaker if so warranted,” he wrote in a letter to his Republican colleagues on Sunday.

“Congress was never intended for Zoom, and no longer will members be able to phone it in while attending lavish international weddings or sailing on their boat. We will meet, gather and debate in person — just as the founders envisioned,” he added.

Previous House rules, put in place by former Speaker Nancy Pelosi, required a member of the House leadership from the majority party to initiate a vote to remove the current speaker.

Do Republicans realize that Democrats are watching all of this and loving it?

One can promise the stars and everything under it but the problem becomes one of trust. Can that person be trusted to deliver on those promises??

Better to get everything sorted now than include a provision to hold a vote of no confidence which just creates a problem later that could be avoided.

So the big question is, who exactly would people support as speaker AND why aren’t they running?

I always taught my kids that when they’re deciding whether to trust somebody, there are two prongs.
First, how sure are you that they have solid intentions of keeping their promise?
Second, how capable are they of achieving that promise, assuming they try their best?
In my opinion, McCarthy fails on both counts.

It’s all about honesty and loyalty for me. I’m a big 12 Step believer and honesty, these #1, for everything in life

The 3rd RINO in a row is not finding it so easy.

The choice is Kevin Mccarthy or chaos

Nope.
The choice is McCarthy vs. “Choose somebody who can get the votes”.

There will be manoeuvering or however manoover is spelled, comprising, squishiness, and a dash of RINO. Result: McCarthy. As in Charlie.

I must repeat instituting the Ius Liberum Veto for Republican Congressman is about as stupid an idea as is possible.

The moderates/squishes will have this Ius Liberum Veto that the idiots demanded to.

The left will love it.

Oh, you mean the thing that the so-called moderates HAVE ALREADY BEEN DOING?

At literally EVERY turn they are allowed to defect to the Democrats, or hold conservative legislation hostage until their demands are met while the actual conservative votes are taken for granted.

The fact that anybody could claim that this isn’t exactly what the squishies have been doing for years is just LAUGHABLE.

Shoe is on the other foot now, RINO trash, turnabout is fair play.

Dems are watching and saying “Holy Crap, those Repubs have finally awakened”

Yeah, McCarthy couldn’t get them in ’17 so Ryan got it.

The graveyard is full of men that were indispensable.

I never really understood that nor his support for McCarthy now, who wanted him to resign after Jan 6

You keep repeating this, and it’s still not true.

Personal hatred is not good for your soul

I’m sure it’s not, but I wouldn’t know since I harbor no hatred for you at all. Far from it, I admire your spirit and passion, but I don’t admire outright lying. I’m funny that way.

I am, one of the most honest people you will ever know. I live my life with honesty as its core foundation.
No one, ever, in my life has doubted that , no one.

You don’t know
Me and we disagree on lots, but calling me a liar, well
It pretty much shows that you need to look in a mirror.

You keep saying that McCarthy wanted Trump to resign after J6, and that is simply not true. He said that he would advise the president to do so IF the president’s cabinet moved on the 25th. He never gave that advice, and Trump himself has said so. Indeed, Trump endorsed McCarthy for Speaker. Why would he do that? Trump is notorious for holding grudges, but he didn’t here. Because it never happened. Period.

And no, I don’t know you. That’s why it was so bizarre to me that you accused me of “personal hatred” toward you. That’s ridiculous. Who hates someone because they disagree on which Republican can win the presidency in 2024? Not me. But apparently, you do or you wouldn’t be holding your mirror up to me. Right? Is that how this works?

Biggs, Gaetz,Good, Norman and Rosendale are making sure they are not screwed. There some be some plum committee that they can pull out of this.

An hour way, let see what happens. It would be cool if they could pinch hit in the last 15 minutes and blow the whole thing up. Problem is 215 congressman are already bought and paid for.

McCarthy was Paul RINO’s choice. You may as well just put a communist in that seat if you put him there.

Many of us here are not as hypnotized by Donald Trump’s choices as others are.

JR’s chronic case of TDS doesn’t allow him to account for that possibility.

It was a weird choice, maybe he thought he could control him but really not enough billions

Selfish? Every member gets to exercise an independent vote. If it is somehow destructive to have a contested vote for Speaker then McCarthy could step aside. Gingrich and the DC establishment don’t really believe their BS on this point, if they did they would have publicly called on McCarthy to step aside if he couldn’t whip 218 votes.

So McCarthy has lost two rounds now. First in history to do that.

Probably time to step aside before some dumb RINOs join with the Democrats and install a Democrat Speaker.

Hah!
Now it’s HIS turn to “make a concession for the good of the party.”
And do you see him doing that?
Nope. Concessions are for suckers, like us.

Third round and McCarthy has lost again.

They didn’t even get through the B’s on the names and he doesn’t have 218.

Gee, this really instills a great deal of confidence in the guy’s ability to drive the conservative agenda through the house, huh?

There were many conversations between the “players”, not just “one phone call” which you cite repeatedly
I don’t know why Trump endorsed McCarty, for God sakes he endorse McConnell, but sure as I’m sitting here McCarthy was looking for a way to have Trump step down regardless the theater of what they are saying right now. .
I don’t believe either of them about it.
People with political contacts have sad so on differ t sites and podcast and I’m just tired of talking about it
You have made this too personal., I guess that rocks your boat but I’m done with the topic
It’s so ridiculous really

I’m not privy to any conversation between the players that was not made public. Are you?

And yes, I was shocked when you accused me of hating you personally. Imagine “hating” someone you’ve never met simply because they don’t support the same candidate you do. Or accusing someone of being that shallow and having a damaged soul (or whatever you were saying about me personally, so weird). I didn’t tell you to hold up that mirror of yours until you said it to me. But you’re right, going back and forth like this is silly. Who really cares if McCarthy wanted Trump to resign or not? Not Trump, obviously, so why would you care even if it were true (and we have no proof that it is, only proof that it is not).

Allow me to translate:

“There were many conversations between the “players”, not just “one phone call” which you cite repeatedly”

‘This is me being contrarian for the sake of making it sound like I know things and do research.’

“I don’t know why Trump endorsed McCarty, for God sakes he endorse McConnell, but sure as I’m sitting here McCarthy was looking for a way to have Trump step down regardless the theater of what they are saying right now.”

‘This doesn’t fit in with my fantasy of who Trump is, so I’ll just barely acknowledge it while pretending it doesn’t really exist. (Maybe later I can come up with a conspiracy of how Trump was coerced into doing these things)’

‘I read nutter blogs that know nothing and pretend like they are insiders. Since most people here don’t believe that crap, I will just obfuscate about where I got it from and try to drop the statement with vague sourcing. Then, I’ll try to drop it from conversation.’

“You have made this too personal., I guess that rocks your boat but I’m done with the topic It’s so ridiculous really”

‘I’m in my feels because no one believes this crap. I’ll try again to emphasize that I don’t want to argue anymore while getting the last word.’

Is it bad that this made me giggle? Heh.