“I’m only saying this because Alec Baldwin is a target for Republicans. They cannot stand him, OK? I’m just saying” 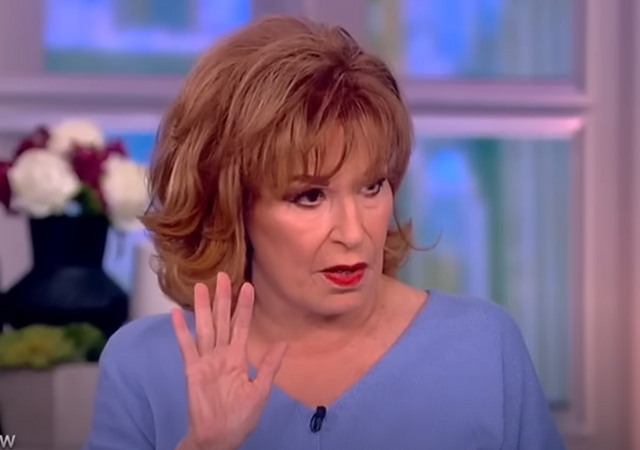 Joy Behar of ‘The View’ falsely claimed on the air on Friday that the DA who is prosecuting Alec Baldwin for the ‘Rust’ shooting is a Republican.

Even if that were true, why should it matter? It matters to Joy because she is a typical leftist. Everything must be politicized and used for leverage. Alec Baldwin is a high-profile Trump hater, so Behar sees him as one of the good guys.

ABC’s “The View” co-host Joy Behar suggested Friday that actor Alec Baldwin was criminally charged over the accidental on-set killing of a cinematographer because of his liberal politics.

During Friday’s episode of the daytime talk show, Behar was unsure whether Baldwin deserved being charged with involuntary manslaughter in the death of “Rust” cinematographer Halyna Hutchins and claimed that the person who indicted him is a “big Republican.”

“The DA who is indicting him — or whatever the legal term is right now — she’s a big Republican. I’m only saying this because Alec Baldwin is a target for Republicans. They cannot stand him, OK? I’m just saying,” Behar said.

Joy Behar: "The DA who is indicting him…She's a big Republican. I'm only saying this because Alec Baldwin is a target for Republicans…I'm just saying." pic.twitter.com/MkAoYF2QdH

She is not a Republican.

The DA is a Democrat

Later in the broadcast, Behar offered a flippant apology for getting it wrong.

Behar defended Baldwin earlier in the show, dismissing criticism of him as a producer on the movie, claiming he was only a “creative” producer. She cited her own history in film to claim that an actor can only think about one thing on a set, and it’s apparently not safety.

“As a person who has been in a couple of movies, all you’re thinking of is your part when you’re an actor,” she said. You’re not worried — I was not worried that my brassiere is going to fall off me or whatever. Somebody else has to worry about that.”

Carmack-Altwies actually a Democrat. Behar corrected herself later in the show and said she got the district attorney mixed up with Andrea Reeb who assisted in the Baldwin investigation as a special prosecutor. She now serves in the New Mexico House of Representatives and is a Republican.

“It’s the special prosecutor who’s now the Republican politician in New Mexico and not the current DA. I get them mixed up sometimes. So sue me,” she said.

I don’t know if it has always been this way, but ‘The View’ has become one of the most politically toxic, garbage shows on television. It’s also a consistent source of misinformation.

Behar: “I’m only saying this because Alec Baldwin is a target for Republicans. They cannot stand him, OK?”

Behar: “Oh yeah, I should mention that Alex did shoot and kill someone.”

Either this woman is so cloistered that she holds the record for willful ignorance, or she’s just a bought-off prostitute of a “journalist”. I think the latter.

What’s truly sad is that actors aren’t trained never to point a weapon at a person. Surely the camera angle can make it look as if it were, even when it’s not. In the same way fist fighting is faked, so can the pointing of a gun be faked. Triggers can be rendered inoperable, barrels plugged, muzzle flash and sound added by CGI / FX in post …

They treat filming like live theater and there’s no need …

What really is truly sad is the pointlessness of the woman’s death.

As a child in the 70’s I was taught that the final responsibility for firearms safety ALWAYS resides with me, the person holding the firearm!

Baldwin absolutely must “hang” for his utter carelessness because it was his sole responsibility to ensure that firearm was safe to use!

A 2 second check of the cylinder would have instantly alerted him to the fact the firearm had live ammunition in it!

Further more I’d be interested to know what their procedures were for firearm safety. Do they give the weapon to the actor unloaded and then it becomes the actors responsibility to load with blank rounds?? Are the actors required to know the difference between live and blank rounds??

Also the armoured or what ever that other chicks role was, she needs to swing too! What was she thinking loading live rounds in to the pistol!?!

But yeah, a 2 second check by Baldwin would have ensured no pointless loss of life AND protected his colleagues from the fall out the killing has had on them mentally as well!!

Baldwin deserves to hang for his utter disregard for life.

I have to agree for multiple reasons, but the main one is that the media will armchair ad nauseum on an ordinary, joe schmo citizen involved in a self-defense shooting or even accidental murder.

Harpy Behar wants to try and pull the bullshit that Baldwin is somehow supposed to get a pass because he is so focused on being an actor and being in the moment. Maybe people who can’t walk and chew gum at the same time should think twice about handling real weapons on the movie set that they are in charge of (remember that Baldwin wasn’t just an actor in this production).

The biggest tragedy is that we can’t see this lady fired, humiliated, and utterly destroyed for her many harpy sins against ordinary citizens. You can now add gaslighting bullshit to that.

Statutes in NM are strict liability, training is irrelevant

Andrew hit it out of the park

From shooting someone in 2021, you or I would’ve been arrested, arraigned, posted half-mil in bail, stood trial, found guilty, and currently serving 5-10 in state pen.

Baldwin’s leftist privilege: Well, take your time. It was an accident. The judge will slap your wrist with a strongly worded letter. May I have your autograph?

Joy Behar: nothing but a back fence gossip but with a camera and a microphone.

Mike Rowe should do a “Dirty Jobs” episodes featuring the people who have watch these shows to document what they are saying.

The d/prog don’t care about the truth, only about shaping the narrative to accommodate their ideology and accomplish their political goals. Facts are irrelevant to them and most of their allies in media, academia and the bureaucracy.

The View’ has become one of the most politically toxic, garbage shows on television. It’s also a consistent source of misinformation

Almost as if deliberately, Amirite?

I have been retired form lobbying Congress for 8 years, there were decent legislators on both sides of the aisle, not many, but still some. Today it seems like the whole Dem party is indecent. What happened? I cannot see anything of merit in the Dem party today. They have an incredible number of really dumb legislators.

They have always been awful, always and the more you give them press, the longer they stay on the air

You’d do much better to eliminate “falsely” from all headlines.

Try it out in your head. The reader infers on his own that he’s not a Republican, else why the headline? Behar is so stupid that she doesn’t even know what you can easily infer for yourself.

With falsely in there, it’s just her word against yours. You might be falsely claiming that she said it, or falsely claimed that she’s wrong. It’s a site hostile to lefties so that’s a 50/50 probability thing.

Joy Behar has no value whatsoever.

I disagree. She is a very good example of a bad example.

Most truths are inconvenient — they change your world, so you might have to act differently to act rightly or well in it. (The title of ManBearPig’s movie only calls out how insulated he was, and remains.)

The View has long since devolved into The View, a self-reinforcing circle of fake truth conjured to dispel the discomfort of encountering something real. They are a fine example of how not to be, to live in the really real world.

And you’re being kind.

I would add that to the list of her other false claims, but have run out of space.

Truth is not a Left wing value
Dennis Prager

I don’t know if it has always been this way, but ‘The View’ has become one of the most politically toxic, garbage shows on television.

“I’m only saying this because Alec Baldwin is a target for Republicans. They cannot stand him, OK? I’m just saying”

Average IQ of Congress is on the same path,down.

“I was not worried that my brassiere is going to fall off me or whatever. Somebody else has to worry about that.”

Everyone else on set was absolutely worried about that. NO ONE wants to see that. No one.