Why announce without an opening? 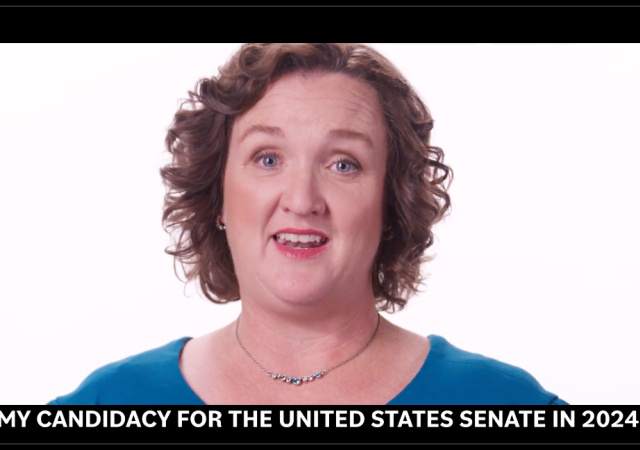 The video has the usual buzzwords and phrases. Our democracy is under attack. The world is going to end. Cats and dogs living together. Mass hysteria!

California needs a warrior in the Senate—to stand up to special interests, fight the dangerous imbalance in our economy, and hold so-called leaders like Mitch McConnell accountable for rigging our democracy.

Today, I'm proud to announce my candidacy for the U.S. Senate in 2024. pic.twitter.com/X1CSE8T12B

Porter kicked Georgiades out of the office because she gave her COVID.

Georgiades said her experience is not unique:

“She has made multiple staffers cry and people are generally so anxious to even staff her because if ANYTHING goes wrong she flips out on whatever staffer is present,” Georgiades said. “She just talks to staffers however she wants.”

“At one point we had an office hike and she left her kids with the staffers in the back while she walked off with the chief of staff,” she continued. “There is no regard to us or feelings or even what we are going through. It is only about her and what she wants. I tried to pass on legislation for veterans and active duty members several times and was told no because she didn’t like who had written it.”

The former Porter staffer said the congresswoman’s office will “overburden the staffer with work so it either comes to a point that they can’t juggle it all or they are fired for not keeping up” and noted this “happened shortly after I got there with another staffer.”

“He was so upset and hurt,” Georgiades said, adding the staffer was a staff assistant in the office — the entry-level paid role for congressional offices.

Politico reported four days ago that Porter had her eye on Feinstein’s seat. The 89-year-old incumbent has not dropped any hints that she plans to retire.

Feinstein became a senator in 1992 after many years in San Francisco politics, including a stint as mayor.

Another vile and useless Dumb-o-crat. Ugly within, and, without. All that these narcissists crave is power and self-aggrandizement.

That picture just screams out “I AM KAREN! HEAR ME ROAR!”

Rep Porter is misreading the room IMO. If anything this may encourage DiFi to retire and cut a deal with Newsom for an agreed upon successor to be appointed. Maybe that is actually Porter’s goal; to get a more vigorous d/prog into the Senate? I don’t see her as being elected statewide in CA given the tribal nature of current CA politics. I defer to the CA residents knowledge on this.

Feinstein hasn’t retired. Only her body is there. Her mind has been in recess for a couple of years.

At the police department Feinstein would be categorized as “in-service retired”. Or, doing nothing while drawing full pay and bennies. A drone.

Why are you going for Dianne Feinstein’s seat?

Because nobody is sitting in it!

“Why announce without an opening?”

Democrats are too important to wait in line for Black Friday or anything else anymore.

She admitted she’s not a biologist—but has experience reading tea leaves.

The sweet smell of success?

The karmic irony of viability. Take a knee, beg… They attempted the same maneuver with Ginsburg.

Bovine, rude and a leftist. She can win in CA.

Fat, drunk and stupid may be no way to go through life. But it’s evidently a prerequisite for a successful career in California/dimmocrat politics.

Feinstein should be glad she isn’t living in a “Game of Thrones” world: Porter would have already had DiFi whacked by now.

“”Feinstein should be glad she isn’t living in a “Game of Thrones” world:””

Or in a real world where she gets in the way of a Clinton.

What a repulsive creature that cow is.

Gotta get a head start on your competition, you know. If Feinstein fails to retire or die, why shouldn’t this fat creature challenge her in 2024?

Schiff vs Porter for California senate in 2024. California uses a top two primary system where the two candidates regardless of party advance to the general election. They have open primaries, not a primary be party affiliation.
I could see a scenario where Diane retires before the election and Newsom fills the seat giving that person an advantage prior to the 2024 election. It may not be Porter or Schiff.

Saw her picture the other day. I was looking in the dictionary for the definition of ugly. Her picture was it.

I’m sorry, but the voters of California deserve Katie Porter.