‘Tip of the Iceberg’: Rep. Porter Demoted Navy Veteran Staffer for Giving Her COVID as Another Describes ‘Culture of Fear’

‘Tip of the Iceberg’: Rep. Porter Demoted Navy Veteran Staffer for Giving Her COVID as Another Describes ‘Culture of Fear’

“She’s prone to fits of rage, regularly disparages anyone who even slightly disagrees with her or displeases her, and is incredibly arrogant, mean spirited and petty.” 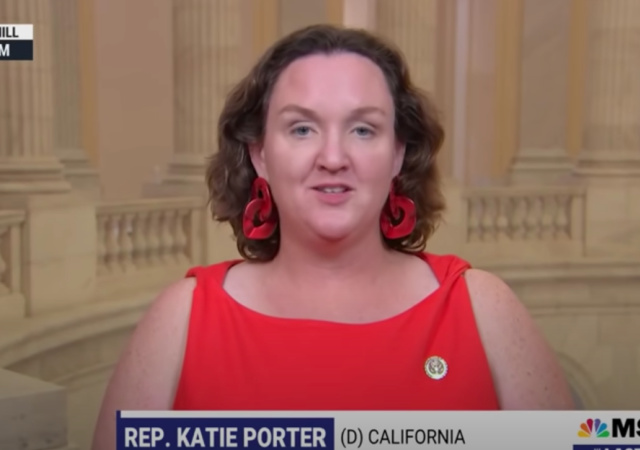 Rep. Katie Porter (D-CA) is under fire for her treatment of a veteran and former staffer for allegedly giving her COVID.

VIBE CHECK: Rep. Katie Porter fires staffer after both test positive for COVID. Full texts from the Congresswoman firing the staffer via text. Shared with permission from staffer. pic.twitter.com/jbhn2NzrmB

The protocol is taking a COVID test as soon as one doesn’t feel well:

According to Georgiades, the “office protocol on testing” that Porter claimed she violated was failing to take a COVID-19 test the instant she felt even slightly unwell. Georgiades maintains an active lifestyle—she goes to the gym almost every day—and says that at first, she thought she was just sore from exercise.

“At the time I felt okay, just sore as if had worked out too hard,” she says. “It was hard to differentiate until the next morning and as soon as I felt sick I took a test, told the district director I had it, and stayed home.”

Nevertheless, Porter contracted COVID-19 around that same time, and blamed Georgiades. The representative, a single mother, was especially angry about arranging for someone to take care of her children while she was sick, and lamented in the text messages that “my children have nobody to care for them.” (According to Georgiades, Porter’s calendar said she was supposed to be in Washington, D.C., that week, anyway. Her three children live in her California district.)

Georgiades told Fox News Digital that Porter probably would have fired her if she didn’t have the “protection of the wounded warrior program.”

But then Georgiades said Porter’s attitude towards her “isn’t uncommon”:

“She has made multiple staffers cry and people are generally so anxious to even staff her because if ANYTHING goes wrong she flips out on whatever staffer is present,” Georgiades said. “She just talks to staffers however she wants.”

“At one point we had an office hike and she left her kids with the staffers in the back while she walked off with the chief of staff,” she continued. “There is no regard to us or feelings or even what we are going through. It is only about her and what she wants. I tried to pass on legislation for veterans and active duty members several times and was told no because she didn’t like who had written it.”

The former Porter staffer said the congresswoman’s office will “overburden the staffer with work so it either comes to a point that they can’t juggle it all or they are fired for not keeping up” and noted this “happened shortly after I got there with another staffer.”

“He was so upset and hurt,” Georgiades said, adding the staffer was a staff assistant in the office — the entry-level paid role for congressional offices.

That is not a face id want to wake up and see.

I look at that face and what immediately pops into my mind is the description in the final few paragraphs of “Coming Attraction” (1950) by Fritz Leiber. I won’t reproduce it here because it is the epitome of unflattering.

I doubt you understood the comment correctly.
Porter can’t prove who gave her COVID.

There’s so much to read through that I may very well have missed it but who is to say SHE didn’t give the staffer COVID?

There’s actually more to this that makes it EVEN WORSE.

Apparently AFTER firing the staffer, a couple weeks later Porter released a video FILMED WITH THE APPEARANCE OF THE FIRED STAFFER, where she talks about how much she ‘respects our veterans’. AFTER FIRING THE VETERAN.

But nothing will happen. She’s a Democrat, after all.

From that text: “Working in Congress truly ruins all your political heroes….”
OMG.

No politician should be your freaking hero. No one. I worked for a member of Congress, and although I was disabused of the idea that they put the needs/wants of constituents above all else, I never looked at any of these creeps as heroes. I thought it would be an interesting job and a prestigious one, although now I’m embarrassed to even say I did it. I’m more repulsed by all politicians now than I ever have been. My default level for them is hellish contempt. If they do anything positive. I might raise that to revulsion.

Yes, but you’re not a progressive. Politics isn’t religious worship to you.

I disagree, somewhat. Reagan was a hero of mine not only for his politics but for serving in the military and his love of country. Washington too.

Speaking of monsters, arrest made in Idaho murders.

How do we know the vet didn’t get Covid from the congresswoman?!

Her behaviors are resume-enhancers for a (D).

Hillary almost road it into the Whitehouse

You’ll often read things about Nazi Germany along the lines of “…how on earth did they ever go along with Hitler?” Well, I’m here to tell you, this sort of person is how that happened. This woman is a budding tyrant. Look at that face. I bet her own mother’s impulse is to smother her with a pillow when she looks at it.

Or, her mother radishes her to be that way.

Raised… I thought I czeched the spelling.

You had to have bean there…

I am waiting for him to cut to the Cheese.

Lettuce know how it works out for he/she/it.

If she did then this woman wouldn’t look like this.

This Congresswoman is a classic “two bagger”.

Is it Katie or KAREN? Actually, she sounds much worse. Probably pompous to the hilt.

I think this points to a deeper issue in this country, is that clowns like this think they are above everyone *just because they won an election*. What a complete fool she is. I think it would take just one person to stand up to her and tell her to piss up a rope she might change, but I doubt it. Mental illness seeps to be a more common theme with these types.

Lately I’ve been coming to the conclusion that 99%+ of people attracted to politics (at least modern-day politics) are pathological scum who can’t be trusted with either animals, children, alcohol/drugs, money, or power.

Something about the current system that attracts the dregs of society and repulses decent people.

It is a sad fact of human existence that positions of power will always and inevitably attract the very last people you would ever choose to have such power.

The problem with this, as far as it applies to politics and law enforcement, is that the people who rise to the top are the ones most willing to perform the most unscrupulous acts to win. There, the most dangerous s* always floats to the top, always, in every culture.

Porker should fire her dietician for giving her a co-morbidity.

“She’s prone to fits of rage, regularly disparages anyone who even slightly disagrees with her or displeases her, and is incredibly arrogant, mean spirited and petty.”

but hey, at least she didn’t claim to be Jew-ish….

As someone once said, “Politics is showbiz for ugly people”. Case in point.

She has a face perfect for radio.

Did the congresscritters exempt themselves from the employment laws that cover this, too?

What employment laws cover this? None that I’m aware of.