Meanwhile, Sweden finds the largest rare earth deposit in Europe….and may now have a government able and willing to develop this resource. 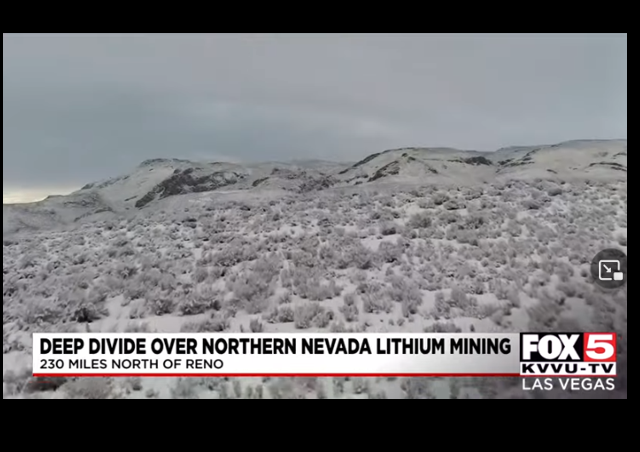 The last time we checked on the Biden Administration energy policy, energy groups pursued lawsuits as the Department of Interior continued its war on the fossil fuel industry.

At least there are enough adults in the current bureaucracy to recognize that foisting green energy on an unwilling public will require lithium for the batteries that power vehicles. Therefore the Biden administration recently gave the thumbs up to a lithium mine.

A Nevada lithium mine that would be only the second in the US is getting backing from the Biden administration as it seeks to boost the domestic supply of the critical mineral needed to make electric vehicle batteries.

The Energy Department issued a conditional commitment for up to $700 million for Ioneer Ltd.’s Rhyolite Ridge Lithium-Boron Project, a prospective supplier to Ford Motor Co. and Toyota Motor Corp. that could produce enough lithium for 370,000 electric vehicles a year. Project partners include mining and metals processing group Sibanye Stillwater Ltd.

The funding, being made through the department’s Advanced Technology Vehicles Manufacturing Loan Program, comes as the Biden administration seeks to create a domestic battery supply chain amid a broader goal of half of vehicles sold in the US by the end of the decade be emissions-free.

However, the administration is now being sued by Native American tribes and conservation groups to halt the project.

U.S. District Judge Miranda Du said after a three-hour hearing in Reno that she hoped to make a decision “in the next couple months” on how to proceed in the nearly two-year-old legal battle over the Bureau of Land Management’s approval of the mine Lithium Nevada Corp. plans near the Nevada-Oregon line.

Lawyers for the company and the Bureau of Land Management insisted the project complies with U.S. laws and regulations. But they said that if Du determines it does not, she should stop short of vacating the agency’s approval and allow initial work at the site to begin as further reviews are initiated.

Lawyers for a Nevada rancher, conservation groups and Native American tribes suing to block the mine said that should not occur because any environmental damage would be irreversible.

Dozens of tribe members and other protesters rallied outside the downtown courthouse during the hearing, beating drums and waving signs at passing motorists.

Meanwhile, Swedish mining company LKAB says it has found Europe’s largest deposit of rare earth oxides, which are also required for green energy products as well as electronics, in the country’s north.

LKAB has identified more than one million tonnes of rare earth oxides in the Kiruna area, located in the far north of the country, the company said in a statement on Thursday.

“This is good news, not only for LKAB, the region and the Swedish people, but also for Europe and the climate,” said Jan Moström, president and group CEO of LKAB.

No rare earth elements are currently being mined in Europe, leaving it dependent on imports. The European Union gets 98% of the minerals from China, according to the European Commission.

As Swedish Prime Minister Ulf Kristersson axed its stand-alone Environmental Ministry, I suspect the nation will go forward with developing these resources. We may be counting on Sweden for future energy needs.

I love the battles between environmentalists and climate change activists.

Good point. Really can’t protect the “environment” and “climate” at the same time…. unless one goes to nuclear power.

Assuming we can come up with a nuclear waste policy that doesn’t include temporary storage with no resolution in sight.

As someone else has pointed out in another context, they won’t like living with the rules they made…

Earth worship will be the end of civilization.

Civilization is just a veneer designed to hold back crime. It doesn’t hold it back completely and it comes out in thin places. If the power is off in New York City for any length of time there is widespread pandemonium. If police were to go on strike it wouldn’t be safe to go out the door.

When an earthquake in Oakland, California collapsed the double decker freeway, within an hour the dead bodies in smashed vehicles were being looted of wallets and jewely.

Without law and order there is no civilization. And without punishment of criminals crime spirals out of control.

It depends where. I recall the Second NYC Blackout. We all say on the front porch endgame some of our (Jewish) memorial candles to our Italian neighbors. The cards on Coney Island Avenue, a huge boulevard in Flatbush, treated intersections properly.

The next day we heard about the violence going on in other neighborhoods. I recall a voice on the radio saying, “they see nice things on TV”, and thinking “so they have TVs. It’s not like they don’t have enough to eat and need to steal to eat”. I think that turned the argument for a lot of people.

I wish this had an edit key. 🙁

It was a very good post any way. Thanks.

There was looting in upper New York during the last snow storm.

It depends where. I recall the Second NYC Blackout. We all sat on the front porch and gave some of our (Jewish) memorial candles to our Italian neighbors. The car on Coney Island Avenue, a huge boulevard in Flatbush, treated intersections properly.

The next day we heard about the violence going on in other neighborhoods. I recall a voice on the radio saying, “they see nice things on TV”, and thinking “so they have TVs. It’s not like they don’t have enough to eat and need to steal to eat”. I think that turned the argument for a lot of people.

The luddite weirdos within the larger environmental movement backed by the anti capitalism sorts and various grievance grifters will be the undoing of the grand vision of a leftist utopia. None of these groups want to see a prosperous, modern society instead they want to roll back the clock to a pre industrial age existence.

These folks are a minority even within the left but are determined, well funded and have allies in the various bureaucracies and on the bench. These are the sorts who if all us on the right said ‘ok, we’ll only use so called green energy’ they would refuse to take yes for an answer. Instead they would do exactly what is happening here, opposing the extraction of resources required to build out a ‘green, renewable energy economy’.

Add to that the very real environmental consequences of wind turbines which slaughter birds and who’s sounds seem to be confusing whales off shore leading to their beaching. Many of us on the more sane side of good environmental stewardship and conservation oppose wind turbines for those reasons and their inherent inefficiency and unreliability.

And they want about 1/10th of the people. I’ve seen many different prescriptions of how to get there, all pretty horrific.

Going back to a pre industrial society would accomplish a population reduction very quickly. Six months would see a huge die off; no pharmaceuticals, no electricity, no transportation beyond horses and sailboats. No modern supply chain and no hope of feeding the population outside agricultural areas.

There’s not enough lithium in the whole world to supply the amount required for batteries`so that every gas engine could be replaced with an electric one.

Who says they want them replaced. Jets for them, public transportation for you… if or when it runs. Cobalt is presently mined with child labor in Africa. Slavery exists especially after 0bama and Hillary sacked Libya to get street cred. Elitism doesn’t trickle down but suffering and poverty well up.

The cars that Fred Flintstone and Barney Rubble drove were environmental friendly. Got good mileage, too.

Even better, when they got their feet rotated every 5,000 miles, it wasn’t confusing because they hadn’t invented shoes.

They’ve been getting oil company money for years.

That’s a thing they ignore, because they don’t expect to replace all the cars. Just those of the nomenklatura. The rest of the peasants can walk,

The Climate Alarmists vs the Naturalists is going to be a big deal. Especially now that we see building Offshore Windmills kills whales. And, Volkswagen is clear-cutting the Indonesian Rainforest to strip mine nickel for their new EV’s.

Naturalists are not going to stand for dead whales and Orangutans.

We should point out that the Biden Administration closed the ONLY nickel mine in the USA during its first year in office. And, the nickel shortage is not just killing EV production it is a disaster for special steel makers.

Before the Ukraine War Russia provided 40% of the world’s nickel.

And, as gunnies will point out, the Obama Administration already closed the last lead smelter in 2013, potentially threatening the US becoming “dependent on foreign nations for its small-arms ammunition supply chain” in coming years.

In this case the environmentalists actually have a point. The leach ponds they use for lithium extraction are extremely toxic.

Their E-V plans look like Soviet “5 Year Plans” from back in the day. I expect their eventual utopia to be about as glorious.

— Approval now means it was banned / prohibited. This announcement doesn’t say the prior reasons for stopping it were addressed.

(“Requires approval” counts as banned / prohibited. They’ll stop you from doing the thing, by force, escalated until they impose their decision on you. Banned. And prohibited.)

— If it makes economic sense, why the $700 million subsidy? Subsidizing manufacturers and purchases isn’t enough support, or is this another group of cronies with their hands out? Or both.

— I don’t see Tesla getting any of the lithium. Must have missed the sign-up sheet at the White House E-V summit.

(My Lithium-Foil Hat says: US-Sourced Lithium to The Companies We Like, plus Disrupted Pacific Supply Chains, and Declaring Now We Don’t Like China So Much, seems like “national policy” that just happens to knee-cap the politically inconvenient guy. How Con-Veeeeeeeen-ient.)

On the other hand, if we get to deal with Sweden more, it’s one less thing to worry about. Other than some of their little redheaded girls, they usually don’t turn out to be humorless, antagonistic d*x. Not even amateur money launderers.