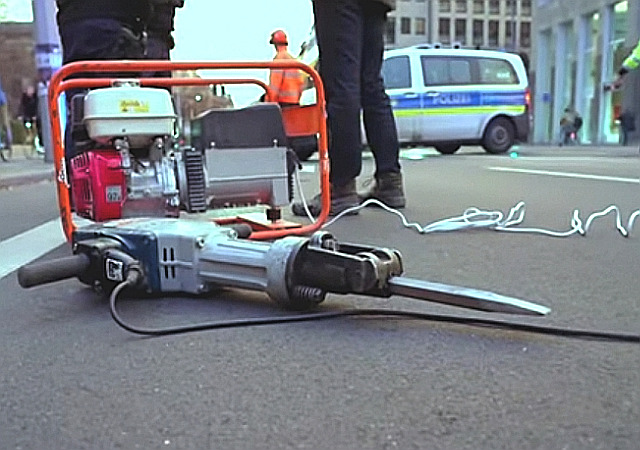 A mob of climate militants from the “Last Generation” group targeted the country’s Transport Ministry, trying to damage the road outside the building using heavy-duty jackhammers. “On Wednesday morning, climate activists of the ‘Last Generation’ blocked the way to the Federal Ministry of Transport … in central Berlin and tried to tear open the road with demolition breakers,” German newspaper Der Tagesspiegel reported.

Members of the Last Generation group have vowed to continue “disrupting everyday life” in pursuit of climate action. This latest demo comes after the move by the Extinction Rebellion UK group to stop riotous protests.

The Last Generation group has vowed to continue “disrupting daily life” to the achieve the aims of greater climate action and awareness.

Members of the Last Generation environmentalist group set up barriers on Invalidenstrasse near the Museum of Natural History, restricting access to one of the lanes. The protest occurred around 8 a.m local time (…).

In response, the German authorities say they took action to prevent the activists from vandalizing the street in front of the Transport Ministry. A police spokesperson said they stopped the protesters from using jackhammers on the road surface.

“The daily grind is taking us straight to climate hell over freshly tarred and paved roads. We can’t let that happen,” Last Generation said on Twitter, referring to the jackhammer activities.

“2022 was just a beginning,” the Last Generation group warned. Last year, German militants linked to the group invaded airport runways, glued themselves to autobahns at rush hours, and smeared paint on museum artifacts — all in the name of climate change activism.

The Last Generation activists have perfected the tactic of gluing themselves to roads and buildings. German police recently revealed that it takes up to €1500, or roughly $1600, in taxpayers’ money to remove a single glued activist from the street.

The Europe-based Last Generation, which according to its own admission, has a chapter in the U.S., purports to be the “last generation” of humans on the planet. The climate alarmist group adheres to a globalist and far-left collectivist agenda. The group quotes UN chief António Guterres, declaring on its homepage: “We have the choice: Collective action or collective suicide.” Humanity “still have two to three years in which we can leave the fossil-fuel path of annihilation,” the group claims.

(Excerpts from German news reports translated by the author)

This is what you get when you have a group too lazy to do their own research but not too lazy to drink the liberal kool-aid.

Soon the bombings, arson and shootings will start. Again.

It’s all about communism and fascistic control. The weather has nothing to do with it.

Unless it’s the Weather Underground.
(And I don’t mean the website.)

Funny how prescient the name “Weather Underground” was. Leftist fascists will exploit anything. Next is that nighttime is racist.

German police recently revealed that it takes up to €1500, or roughly $1600, in taxpayers’ money to remove a single glued activist from the street.
No, it doesn’t. It only requires that money if you care about preventing injury and pain to the people who glue themselves down. It only costs labor funding to have a couple of burly guys pull them up and leave any glue and skin behind. And that’s how you actually stop this crap – make it HURT.

Just get the RoP to cut the hands off.

Now, that’s just crazy. Use a large crowbar to tear them away. If that fails, slide a flash grenade between the activist and the street or wall. (That’s a much, much better use of the grenades than tossing them into a baby’s crib.)

Or another solution. .. Leave them glued there. Let their own activists feed them, bathe them, diaper them, and they can live their life glued to the road until they get tired of it. Hopefully one of their fellow activists will have some idea what solvents will get them unstuck.

Better yet leave them in place and don’t allow them any aid or assistance. They get cold and hungry enough then they will figure out how to remove themselves.

I’m disappointed that the jackhammer was powered by a wind turbine or solar panels. 😉

“Yeah, we have made the calls for appropriate assistance, but it just takes so LONG now to get through the disrupted road systems. I’m sure you understand.

You have a nice day now.”

Jackhammer a street? Bulldoze their house.

Part of the Klaus Army: they don’t own anything.

Glue themselves to the highway? Bring in steamrollers and make them part of the highway.

What better way to deliver the message that “we’re tarred of you.”

Everything is produced with petroleum, something these idiots don’t seem to understand.

Are the jackhammers being powered by wind or solar?

Greenie weenies need to STFU and go hide in their stone age cave, since they think fossil fuels are so evil. They’d better swear off modern agricultural products too, since that’s heavily dependent on fossil fuels and/or petroleum derivatives. Let them forage for their food – should be a blast in wintertime.

Notice all these folks live in cities – which are usually at or near sea level or on a river.
You’d think if they really believed all this they’d all move to much higher ground and build their utopia there.

No Jillhamers? What a buch of misogynists!

They identify as “Jack.”

The jackhammers and support generators are devices used in the commission of crimes. Confiscate them. If they are rented, seize and freeze the credit cards used to rent them, and the bank accounts used to pay those credit cards. The owners of those cards should be brought to the police station for a little chat, if they’re not the people arrested. “Conspiracy to commit acts of terrorism” can be used to freeze any other accounts associated with them. Money given to commit crimes such as this can also be froze and seized, as anybody involved in the War on Drugs knows. Any offices of the Last Generation should be raided, along with the organizers and financers, electronic devices confiscated for examination to see if they were used in the commission of this crime, etc…

In short, have the prosecutors do what they should be doing. If the Germans need a little help, we should be able to loan them a bunch of prosecutors from the J6 committee that have worked their way down to crimes such as “Standing on the grass” and “Cutting in line at the porta-potties”

It’s instructive to our own prosecutors. Extension Rebellion and Last Generation are ‘protest groups’ but are actually involved in what is an organized crime. Blocking the street and tearing it up with a jackhammer requires organization.

Fine — it’s organized crime then. Use the tools prosecutors have to go after organized crime, and see how quickly the protesters decide that they don’t have to glue themselves to the road anymore.

Well, we could (and have) made the same argument about the fortuitous pallets of bricks that just “appeared” in the vicinity of BLM/Antifa riots. But the DOJ etc. would actually have to care.

I’m not certain that I’d like to start down that road.

We’ve already started down that road. But it’s one-way, to the right only. We need one that goes left.

There are some truck drivers in Canada and farmers in Netherlands who might agree with you.

“The avalanche has already started. It is too late for the pebble to vote.”
–Ambassador Kosh
https://www.youtube.com/watch?v=g1GF4Gnb-D0

“Conspiracy to commit acts of terrorism” can be used to freeze any other accounts associated with them.

Betcha some of their money comes from Bill Gates and George Soros and other “wise people.” Through multiple third-party funding bundlers, of course.

Paintball pellets are 3¢ each.

“trying to damage the road outside the building using heavy-duty jackhammers.”

What?? Licensing and registration, mach schnell!!

(The totalitarians in Massachusetts require licensing and registration to own or use “power nailers,” tools that use .22 blanks to propel and seat construction fasteners. Surely the totalitarians in Germany can rise to this challenge.)

Water cannons and 200 psi fire hoses are generally handy, cheap to employ, and are an eco-safe method for removing items adhered to roadways.

Winter use can be problematic do to re-adhesion.

What’s ironic is that historically, we immobilized miscreants in stocks, where the public could abuse them verbally and physically.

These people go to great effort to immobilize themselves. Why does no one make the obvious effort to follow up?

Time to stock up with rotten produce. A few hours with faces covered in frozen rancid tomatoes might change their minds. Especially if they aren’t allowed any help wiping themselves off.

So, make it harder to do wrong things not easier to do right ones.

Do they really think this is going to corralle people who can make roads and jack hammers? They can’t fix anything, so it would really screw them up. But the people they’re obstructing who made the roads can probably make roads again.

Do nothing, and the problem solves itself, no?

Gee Germany…! Maybe the Poles, Slavs, cripples, and Jews weren’t do bad after all.

“Just days after migrant gangs rampaged on the streets of Berlin on New Year’s Eve, climate militants have launched a sweeping campaign to disrupt the German capital.”

Then, for no reason whatsoever, a aggressively militant national socialists movement led by a mercurial pro-Germany firebrand rallied beleagured working class masses in order to push back against the anarchist marxist madness.

For no reason whatsoever….

Those without a belief in God will believe anything

The problem is, of course, the the ecoterrorists have their political wing in the federal govenrment in Germany. These terrorist groups get funded with taxpayer money, basically..

It’s hilarious that these Environment as Religion mopes are using a dirty and inefficient gasoline generator, a machine that they themselves would like to outlaw, to power their jackhammer.

“The Last Generation activists have perfected the tactic of gluing themselves to roads and buildings. German police recently revealed that it takes up to €1500, or roughly $1600, in taxpayers’ money to remove a single glued activist from the street.”

Why on earth would you remove them? Leave them where they themselves deliberately and knowingly put themselves. Has Germany no equivalent of the doctrine of assumption of the risk?

I would think scrubbing the remains off the street after the traffic does its thing would be cheaper.