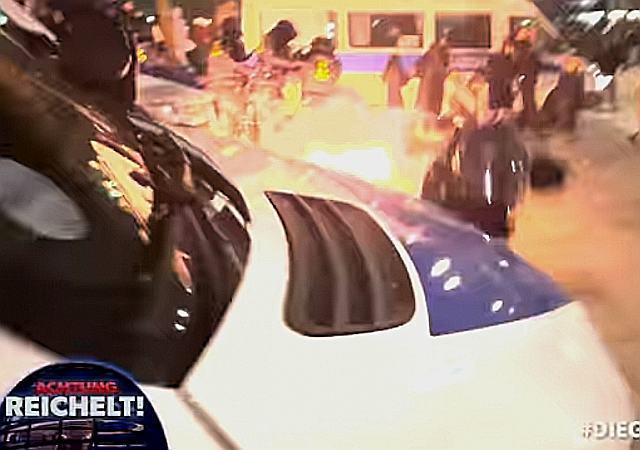 New Year’s Eve again comes as a wake-up call to Germans, as violent migrant gangs fought pitched street battles with police and firefighters in Berlin, Munich, and other cities across the country.

In the German capital Berlin, masked men in migrant-dominated areas were seen erecting road barricades and setting them on fire. Police officers and first responders were hurled with firecrackers and rockets as they tried to clear the streets.

“Nationwide, young men in particular fought pitched battles with emergency services on the New Year’s Eve. Who are these anarchists who are destroying our country?” German newspaper Die Bild Zeitung asked.

The answer is easy. These are migrant men who have been swarming the country since former Chancellor Angela Merkel opened Germany’s border to mass migration in 2015.

German police confirmed the identity of the attackers. “For many in the emergency services, the prevailing impression is that groups of young men with a migration background are far overrepresented in these riots,” said Rainer Wendt, the head of the German Police Union.

Describing the scenes resembling those from a warzone, the Swiss publication added:

In Berlin, the police and fire department was called in 3,943 times, which resulted in 15 firefighters and 18 police officers getting injured. Particularly in the districts of Kreuzberg and Neukölln, which have a high proportion of migrants, there were serious attacks: In Kreuzberg, 200 hooded men attacked firefighters who wanted to extinguish [burning] barricades, whereas in Neukölln 50 miscreants fired rockets at the emergency services and even threw an illegal round-shell bomb at an occupied police vehicle. [The Police] made 103 arrests.

Attacks were also reported in Düsseldorf, Frankfurt, Munich, and Stuttgart.

On New Year’s Eve in Berlin, the fire department reported 38 separate incidents, including 14 cases where firetrucks were supposedly “lured into ambushes” and shot at with fireworks and pelted with beer crates.

The level of aggression toward emergency service staff was completely unexpected, Berlin fire department spokesman Thomas Kirstein told public radio RBB. A total of 15 emergency responders were injured in Berlin, with one requiring hospital treatment. The police department said 18 of its officers had been injured.

Berlin’s fire department said it was “shocked and saddened” by the incidents, which left many asking what lies behind the apparent increase in violence toward emergency service staff and why they in particular have become a target.

DW TV didn’t reveal the identity of the miscreants but speculated if the attacks were “linked to display of masculinity?”

The German news website Heise called for a “critique of patriarchy instead of ethnicization,” a made-up word that refers to focusing on the ethnicity of the attackers. “The right-wingers … blame the misconduct on migrants. But most of the perpetrators were men,” the news outlet claimed.

The latest wave of attacks shows that Germany has learned nothing from the events of New Year’s Eve of 2016, where some 2,000 migrant men raped and assaulted around 1200 women.

Since Germany opened its doors to illegal migrants in the autumn of 2015, it has seen a surge in migrant crimes, including murders, rapes, and other violent crimes. Seven years on, Germans have lost control over their streets. Once idyllic German cities resemble warzones as the country enters 2023.

Masculinity and patriarchy? What estrogen laden drivel. Government let these migrant mongrels come in in waves and now look at them. Doing what invaders do. For Germans now, they had better summon up some long dormant masculinity or they will not survive. German women will be especially grateful for the effort. It is they who will suffer most if things go badly.

The Germans have been geldings for decades.

Yes, we had a hand in that too.

Yes, we did. And took it much too far.

At least males should have been allowed to keep one testicle at least to 1960 or so. Then apply for the second a little at a time.

Margaret Thatcher was the Last Man in Europe.

We are so fortunate that all of our illegal migrants are peaceful and law abiding. In fact, the more that come in, the lower our overall crime rate becomes.

That will only be the case until their population here hits 1-2%, and then our Muslims will be just like those in Europe. I think that civil order brakes down and lives are at risk, that deadly force should be used to end the risk, I also think that a day of reckoning will come, where developed countries will have to expel these people, or cease to exist.

Imagine what will happen if Germany ever has to draft her young men to go to war to protect the country.

They’ll have to draft the women and the trannies.

It becomes a lot clearer if, in every instance where they say “migrant”, you substitute Muslim.

When the attacks start, gun them down. Yes. I’m serious.

Nothing like gun fire to get some miscreant’s attention. I saw some videos of the 2016 attacks on women right out in the open. Sometimes young ‘men’ could be seen looking on as if asking the women, ‘where are your capes and weapons and superpowers we see on our screens’. They were puzzled. Like us do something?

not just gunFIRE, but, pink mist and missing heads.

They should hire the French to build a Maginot wall around the police to protect them from invaders.

The pols protect the police.

This would improve neighborhoods and our gene pool.

First, why is “Ambush” in scare quotes in the headline? They seem to have actually been ambushes.

Secondly, yes it actually is patriarchy causing this. Exactly the sort of patriarchy the progressives (feminist order) always claimed Christianity and Western Civilization was, but was not. Fundamentalist Islam really does treat its women as chattel and sub-human. And progressives imported it for two reasons: to break nationalism (and thereby advance globalism) and to break Christianity (their nemesis).

“The right-wingers … blame the misconduct on migrants. But most of the perpetrators were men,”
Yes. They were migrant men. Admittedly, it’s a translation, but it’s still stated as if the two things are mutually exclusive.
Of course, with how the German males seem to be allowing this stuff to happen, maybe it’s more unitary than exclusive – the only men are the migrants, as the Germans let this continue to slide.

(BTW, I have German friends who are actually scared spitless by this group. Of course, they also thought reunification was a bad idea – at least until the East Germans learned to be German once again.)

“” I have German friends who are actually scared spitless by this group.””

Americans: “we should have picked our own cotton!”

Germans: “we should have done our own menial jobs!”

Sure would be nice to have rights of self or home defense, and some way to do either, jah?

All the child trafficking of English girls

I’d have killed the bastards long ago

There ar4e few men in Britain these days and the few remaining have no real weapons, and are arrested far faster than the scum that need cleaning-out.

The days of Great Britain having folks like Douglas Bader, “Catseyes” Cunningham, or Admiral Ben Bryant are long gone.

[catastrophic] [anthropogenic] immigration reform (CAIR), much of which is driven by World War Springs (WWS).

In my opinion, CAIR is POS and should be expelled from America or maybe shark infested waters.

CAIR is the propaganda arm of the Muslim Brotherhood – the world’s largest and deadliest Muslim Terrorist group, which our federal govt refuses to officially designate as such. They are too busy prosecuting anyone to the Right of Pelosi.

Just finished Camp of the Saints, Most ways he missed the mark, but did get the silent invasion part right.
Our illegals are for most part economic so are hard working and peaceful yet the drug cartels are also coming and are not peaceful.
Europe is in the long term going to lose and be swallowed into the Islam.

Unless they wake up and get rid of the vermin.

The end game everywhere is a government dependent peasant class. THAT is why they hate Trump. He actually has a clue of what made America great.

Merkel did more lasting damage to Germany than WWI and WWII combined.

Assist the effort to repel the death cult seeking to expand Islam throughout every nook and cranny of the USA and all other Western countries.

Beware of CAIR. Traitors within the USA actually allow those vermin to enter public grade schools to share the beauties and wonders of the “Religion of Peace.” Try to do that with any other religion and see what happens to your effort.

Yep . . . just one of many ploys by the New World Order (NWO) to divide and conquer the people of the USA. The same methods are used in other Western countries though the name of the Islamic death cult groups vary from place to place.

“Who are these anarchists who are destroying our country?” German newspaper Die Bild Zeitung asked.”

Because they can’t blame the real problem, Islam, for ideological and legal reasons. Also note unspecified “migrants”, as if the reader has no understanding of what the term really means in Europe today.