Putin: Russia aimes to “strengthen the cooperation between the armed forces of Russia and China.” 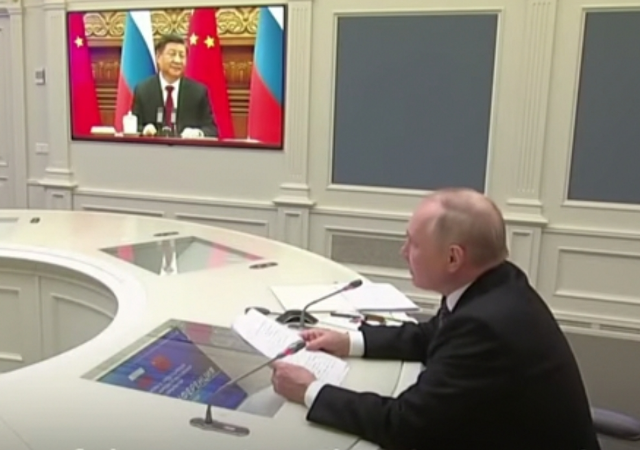 As Ukraine braces for a possible Russian winter offensive, Russia’s President Vladimir Putin and Chinese leader Xi Jinping have pledged to boost bilateral military ties. The announcement to this effect was made during a video conference between the two leaders on Friday.

President Putin also confirmed that the Chinese leader is expected to visit Russia in coming months, the first such high-level visit since the Ukraine war began 10 months ago. “President Putin said he expects his ‘dear friend’ President Xi to make a state visit early next year as he vowed to increase military co-operation between their two nations,” the Times of London reported.

The move to boost China-Russia military cooperation comes as Moscow scrambles for weapons and munitions as winter sets in along the Russian-Ukrainian frontline. In recent months, Kremlin has received military supplies from Belarus, Iran and North Korea.

The Associated Press reported the details of the Xi-Putin meeting:

Russian President Vladimir Putin and Chinese leader Xi Jinping vowed Friday to deepen their bilateral cooperation against the backdrop of Moscow’s 10-month war in Ukraine, which weathered another night of drone and rocket attacks following a large-scale missile bombardment. Putin and

Xi made no direct mention of Ukraine in their opening remarks by videoconference, which were broadcast publicly, before going into private talks. But they hailed strengthening ties between Moscow and Beijing amid what they called “geopolitical tensions” and a “difficult international situation,” with Putin expressing his wish to extend military collaboration.

“In the face of increasing geopolitical tensions, the significance of the Russian-Chinese strategic partnership is growing as a stabilizing factor,” said Putin, whose invasion of a neighboring country has been stymied by fierce Ukrainian resistance and Western military aid. (…)

Putin said military cooperation has a “special place” in the relationship between their countries. He said the Kremlin aimed to “strengthen the cooperation between the armed forces of Russia and China.”

China’s ruling Communist Party has refused to recognize U.S. and Western sanctions placed on Russia in the wake of its ongoing war on Ukraine. In the months following Russia’s invasion, China emerged as one of the biggest customers for Russian oil and gas as European countries began cutting energy imports from the country.

Even before the start of the Ukraine war, China and Russia had been cementing their military ties aimed at confronting the U.S. and its allies. In November 2021, both countries agreed to work towards forging a “de facto military alliance,” the Chinese media reported. Chinese and Russian defense ministers “signed a road map for closer military cooperation over the next five years, the South China Morning Post reported.

With Russia waging war in Ukraine, and China renewing its threats to invade Taiwan, both countries have held a string of joint war games in the Asia Pacific region. In early September 2022, China, Russia, and their allies “test[ed] their combat readiness across 13 military training grounds in Russia, with exercises held in Siberia, the Far Eastern Federal District, the Sea of Okhotsk and the Sea of Japan” as part of week-long Moscow-sponsored “Vostok 2022” military drills, the German state TV channel DW News reported.

These military exercises continue as a tumultuous year comes to an end. “Russia and China have completed naval drills in the East China Sea, after a week of joint exercises which included practising how to capture an enemy submarine with depth charges and firing artillery at a warship,” Reuters reported Wednesday citing official Russian sources.

What would our world be without a healthy Axis of Evil?

Another Axis of Evil, and part of it (China) owns the US – and its’ current president as well as minority GOP leader – lock stock and barrel.

China will own Russia

Thanks Biden and McConnell and all the wus’es of America

China owns the vast majority of the republican party and all of the democrat party.
But they don’t own us and never will.

So now the Russia – Ukraine war is becoming more transparent as a war by proxy between the United States of America and China.

China China Russia Russia. Our enemy is the continued existence of the one enemy here at home. The Democrat party. They are the breeding ground of all bad ideas roiling our culture. Russia needs rid of its autocrat and his security apparatus, China needs rid of the CCP. Then it is our turn.

Memories of the Obama/Biden/Clinton’s World War Springs and other criminal social progress without borders over a century.