UK daily The Guardian: “Beijing on Saturday continued some of its largest-ever military drills around Taiwan – exercises seen as practice for a blockade and ultimate invasion of the island.” 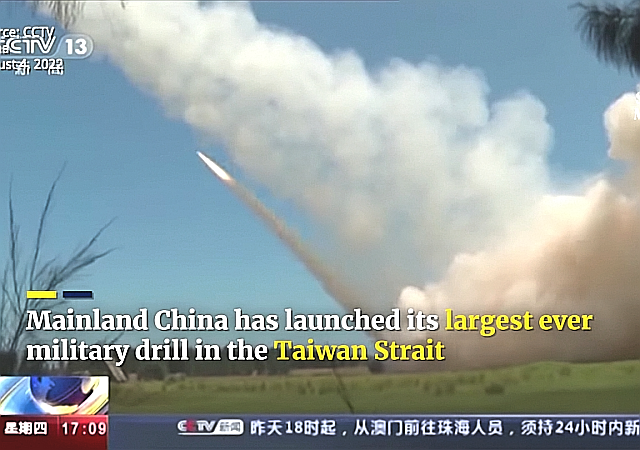 “Taiwan has accused the Chinese army of simulating an attack on its main island,” UK newspaper The Guardian reported. “Beijing on Saturday continued some of its largest-ever military drills around Taiwan – exercises seen as practice for a blockade and ultimate invasion of the island,” the daily noted.

Multiple PLA craft were detected around Taiwan Strait, some have crossed the median line. Possible simulated attack against HVA. #ROCArmedForces have utilized alert broadcast, aircraft in CAP, patrolling naval vessels, and land-based missile systems in response to this situation.

Since Pelosi’s flew out of the country after a brief surprise trip on Wednesday, the Chinese battleships and warplanes have surrounded Taiwan and are holding live-fire drills at six difference areas around the island.

“China’s biggest-ever military drills around Taiwan have been taking place for a second day near the island,” the BBC reported Saturday. “Several Chinese vessels and aircraft have crossed the median line for a second day, Taiwan’s defence ministry says – this is the informal dividing line in the Taiwan Strait between the Chinese mainland and Taiwan,” the broadcaster added.

On Saturday, the Taiwanese air force responded to a major incursion by Chinese warplanes. The Reuters reported:

Taiwan’s air force scrambled on Friday to warn away 18 Chinese aircraft that entered its air defence zone, Taiwan’s defence ministry said, part of what is a regular pattern of incursions that has angered the government in Taipei. (…)

The number of aircraft involved was well off the last large-scale incursion, 39 Chinese aircraft on Jan. 23, and since then, such fly-bys have been with far fewer aircraft.

The bombers, accompanied by a Y-8 anti-submarine aircraft, flew to the south of Taiwan through the Bashi Channel which separates the island from the Philippines.

In response to Pelosi’s Taiwan trip, China has suspended dialogue with the U.S. on issues ranging from military to Climate Change.

President Joe Biden’s Climate Czar John Kerry is apparently devastated by China’s decision to halt bilateral climate talks. By walking out of the bilateral climate dialogue, China is not only hurts the U.S., it “punishes the world,” Kerry lamented. “No country should withhold progress on existential transnational issues because of bilateral differences,” he pleaded.

The NPR report Beijing’s decision to suspend talks with the Biden administration in key areas:

China declared Friday it was stopping all dialogue with the United States on major issues, from climate change to military relations, in a day of rapidly escalating tensions over House Speaker Nancy Pelosi’s visit to Taiwan. The White House summoned China’s ambassador to protest what it called China’s “irresponsible” actions since the visit.

Time for us to hack into the Huawei chips their equipment relies on. If our weapons are compromised, so are theirs. Let’s see if we can make those missiles land right in Red Square. A few fighter jet collisions would be amusing too. The navy, meh. Built with the same spec tolerance as their dams and ghost city infrastructure so I expect things will start falling apart on their own.

Don’t get TOO confident. There were all banner of stories about Japanese fighters made of bamboo as well. The Zero turned out to be quite the “bamboo” aircraft. And, as memory serves, Japanese torpedoes worked when ours did not.

“And, as memory serves, Japanese torpedoes worked when ours did not.”

True. It was a couple years after the attack on Pearl before we got those straightened out.

The Zero (AKA “Zeke”)was light and therefore fast and maneuverable. The Mitsubishi A6M was also the Navy type 0. Again, it would be a couple years before we turned the tide.

So far, they are not rolling out any weapons we can’t match or exceed right now in quality nor in numbers. All they are revealing is how they want to fight that was. They are committed to the equipment they have with the technology they stole from and Russian weapons they bought and modified. That big aircraft carrier they rolled out two weeks ago has not indicated that they built the special jets that will be needed to make that carrier effective. Nor has it been confirmed that they can even launch them with their out-dated catapult technology.

What they have built is a giant military that makes standard invasions prohibitively dangerous due to the number of soldiers. They haven’t accomplished any of their preliminary objectives of securing the island chains nor the Taiwan Straits so attacking Taiwan would be a very costly victory if they win. They would still be locked behind Taiwan and the island chains unable to project their naval power very far.

We, on the other hand, are the source that stolen technology and have been blocking much of the new technology from them. They are still struggling to produce 4G cell phones while we have our 5G capability. We can only try to imagine the technology that is in reserve at sites like Area 51. It must be awesome.

Our biggest advantages are robust innovation, unequaled ability to deploy and ramp up production very quickly, decades of battle experience, AND we get to fight the war WE want to fight as opposed to China which is prepared to fight a different war.

Our biggest liability against China (and Russia) is that although we have the latest nuclear weapons and more of them than everyone else combined, by our moral values, no one “wins” a nuclear war. Our enemies, especially China whose population dwarfs ours, are willing to suffer massive carnage in “winning”. It will take a quick knock-out punch for us to “win”.

So I get the point about Japan, but we saw what was coming and understood that Japan had no chance to win a prolonged war. The Japanese military (except for one) knew it too.

Correction: ” All they are revealing is how they want to fight that WAR”.

“China whose population dwarfs ours, are willing to suffer massive carnage in “winning”.”

Which is why you make sure the enemy leadership* knows you are always tracking them, always know their location, and are dedicated to making sure they die first and hardest. You make sure they know that one Balistic missle submarine is dedicated just to take down the leadership.

*that includes the political leaders like Xi, and the military leaders. Get them all, and make sure they know that plan.

On the plus side, invading Taiwan will show us what China’s weaknesses and vulnerabilites are.

We should respond by taking the opportunity to purge our country of all Chinese students/spies.

I don’t know why this got three dislikes as watching another country go to war always allows opponents to view their tactics and it is beyond a shadow of a doubt we have Chinese spies operating in the US and most Chinese students are allowed to study here with the Communist Party’s blessing.

Because we have two other types here:
1) The paid CCP/democrat trolls
2) The pathetic wimps that think being nice will win a war or deter the enemy

Why should we wait to expel them?

And Taiwan can rehearse sending a few missiles into Three Gorges Dam and send the Chinese government a film of a good chunk of its farmland, finance, and manufacturing going under water. Y’know, since they’re just practicing.

nah, that dam is the largest giant hunk of steel and concrete on Earth, you’d need a sustained bombing campaign or a series of nukes to collapse it

and if you could do either of those, there are better targets

anyways China is dependent on a massive trade surplus, people would be starving in the streets of Tier 3 cities long before the staging could even be completed

You are correct, lobbing a few missiles at the dam will not do it. OTOH, that dam already has flaws, and it’s possible they can be exploited with the right expertise. And the Taiwanese have the right expertise as they have access to the experts in the US.

But all that is ignoring the obvious, the chinese cannot mount an invasion of Taiwan, all they can do is cause the destruction of Taiwan.

Recall Pelosi’s visit to Syria and the Bashir Assad residence.. The east coast glossy-magazine media corp spent weeks massaging Assad and his wife “The Desert Rose,” as westernized Good People. Their well appointed living spaces immediately recognizable to the Manhattan penthouse cocktail crowd. Nancy shows up in Damascus wearing a headscarf – in full arse kissing mode. The last thing she would wear to a American Mennonite meeting in Los Angeles? A headscarf. So, yeah, arsekissing mode.

Point being – the glossy east coast cocktail crowd want something from Taiwan. Lots of very focused negative media attention on Mainland actors. When does that ever happen. Never? This sort of thing usually involves money – no huge surprise – Pelosi is, after all, The Queen of Graft.

We keep electing Republicans who are part of the scam. What should we then expect?

Not Again: McConnell to Run for Senate GOP Leader Again After 2022 Midterms:

He did so once the Tuesday election results were rolling in revealing how badly his candidates did. He also chose to warn anyone thinking of running against him to “bring it on”. That’s the sign of someone who is worried.

All he wants to do is to retire once he wins re-election, picks his successor as Senate leader (Thune or if he loses his primary, Cornyn) and picks the Kentucky replacement for his seat. He’s sweating.

How can you invade something you claim to already own?

More bluffing by the chinese. They are desperate. One old woman has handed the chinese a major defeat.

China’s display is an intelligence gold mine for the DIA and other agencies around the world.

China is ALWAYS practicing an invasion of Taiwan. This isn’t really news, except to people with very short attention spans. They just make a show of it and remind everyone they’re doing it when they want people to get scared about Taiwan.

lol it’s a joke, an invasion is more likely to topple Beijing than Taipei

as soon as the staging began, China’s economy would collapse under sanctions

Taiwan is not only an OECD country, it’s the home of the irreplaceable, inimitable TSMC… if they can get their hands on material they’ll greet CCP with tactical nukes