South China Morning Post: Beijing and Moscow “signed a road map for closer military cooperation over the next five years.” 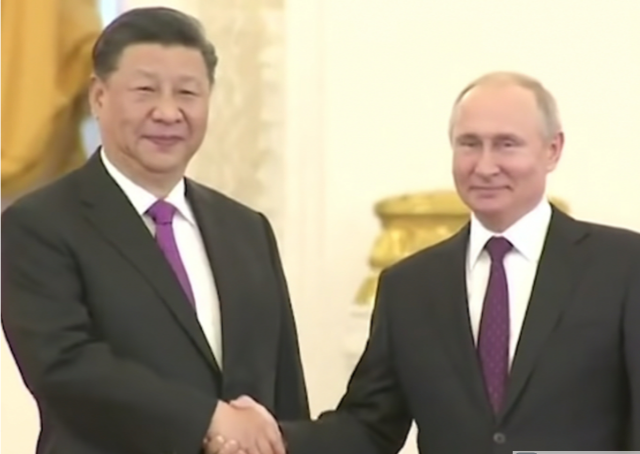 During a virtual meeting on Tuesday, Chinese and Russian defense chiefs announced a series of joint military maneuvers and measures cementing an already growing bilateral partnership. Both countries agreed on a “road map for closer military cooperation over the next five years,” the article reported.

The strategic agreement comes as both countries engage in aggressive military build-up aimed at threatening their regional neighbors. The emerging strategic alliance is aimed at countering the United States, the report noted.

If the proposed roadmap goes according to plan, this military alliance could pose a serious threat to United States’ security.

The combined Russia-China military budget surpasses Washington’s defense spending. According to recent estimates, the Chinese and Russian defense budgets are roughly $604 and $200 billion respectively. The U.S. defense budget is currently pegged at $715 billion.

China and Russia are edging closer to a de facto military alliance to counter growing pressure from the United States, with the Russian defence chief telling his Chinese counterpart that US aircraft activity near the country’s borders had increased.

In a video call on Tuesday, Russian Defence Minister Sergei Shoigu and Chinese Defence Minister General Wei Fenghe agreed to expand cooperation through strategic exercises and joint patrols in the Asia-Pacific, including the Sea of Japan and the East China Sea, according to Russia’s defence ministry. (…)

In a brief statement, China’s defence ministry said the two sides would “continue to deepen strategic cooperation between the two militaries, continue to strengthen cooperation in strategic exercises, joint patrols and other areas, and continue to make new contributions to safeguarding the core interests of China and Russia and maintaining international and regional security and stability”.

The defence chiefs discussed joint naval patrols in the northwest Pacific and joint air patrols over the Sea of Japan and East China Sea during the call, and signed a road map for closer military cooperation over the next five years, Russia’s defence ministry said, without giving further details.

As we reported, Russia has amassed more than 100,000 troops near its western border with Ukraine. The deployment coincides with the Moscow-backed Belarusian regime’s bid to push thousands of illegal migrants, many of them from Syria, Iraq, and Afghanistan, into neighboring Poland.

Meanwhile, China has sharpened its rhetoric against Taiwan, an independent island nation Beijing regards as part of its own territory. Last month, around 15o Chinese fighter jets, warplanes, and nuclear-capable bombers violated Taiwan’s air defense zone, the biggest breach of its kind by Beijing so far. Chinese President Xi Jinping recently threatened to use military force if the U.S. came to the aid of the beleaguered nation.

Communist China, once a junior partner to Josef Stalin’s Soviet Russia, turned into a bitter rival at the height of the Cold War. Chinese dictator, Mao Zedong, drifted away after Moscow refused to pass the mantle of global Communist leadership after Stalin’s death in 1953. In 1969, the two powers fought a major war over the disputed Sino-Soviet border. During the Cold War, Moscow and Beijing armed and trained competing insurgent groups in the third world countries in the bid to wrest control of the Communist movement.

With China’s economic and geopolitical ascendency, Vladimir Putin’s Russia  — a frail shadow of its past glory — is willing to play Beijing’s junior partner, reversing the power balance in this historic partnership.

This is a very bad thing.

Anything forged in China is bad.

And, so much of what comes out of China IS a forgery.

I’m so old, that this is where I came in.

Aren’t you going to stay and watch the cartoon again?

The Russian bear and the pooh bear.

US ACTED AS VICTOR AFTER COLD WAR

Russia resents the way the US acted when it was experiencing internal turmoil.

Now the US has its nightmare scenario.

In truth, US and Russia have much in common. Rising China is a massive threat to Russia. China would love to gain Siberia and all its vast natural resources.

But the Democrats have been Anti-Russia and Pro-China for decades. Our leaders are blinded by a 75 year defense posture that sees Russia as an enemy. Consider the fact that Joint-Chief of Staff MILLEY told his China counterpart that he would give China a heads-up if the US were to attack them. That’s just nuts (and perhaps treasonous).

To his credit – Trump tried to change the anti-Russia dynamic. But the Democrats tied his hands and undermined him with their Russia-Hoax nonsense. US is reaping what the Dems have sowed.

There’s no perhaps about it.

I agree with you, Ben. Ideologically, we may not agree with Russia. But, from the standpoint of a lot of our culture, values, and being blunt, race, we have a lot more in common than most people think. I, for one, respect the Russian people. There are Hardy and they have initiative. That is, when they’re allowed to have that initiative. If the battle is ever taken where it needs to be taken, IE the Muslim problem period Russia will be far more of an ally even than Western Europe. Just my own opinion.

“…fought a major war in 1969”? Come on. It was a border skirmish that killed fewer than 100 on either side over six months. If that’s a major war, what adjective would you use for World War II?

Thank youy Barack Obama, Joe Biden et al without y our Russia collusion BS and 4 years of McCarthyism we would have had a chance at keeping Russia out of this next cold war.

I hope when Russo-Chinese tech cooperation pushes them forward your rigging the 2018 election and bringing fascism to this country was worth it.

Indeed this isn’t good. What prevents the Bear and the Dragon from launching coordinated moves against the Baltics, Ukraine, and Taiwan?

Which would the Biden Administration prioritize? The U.S. military is not your father’s or grandfather’s military.

The top of the Pentagon seems to be prioritizing hollowing out the force and destroying morale. The generals and admirals are busy looking under their beds for “white supremacists,” trying to understand “white rage” and figuring out how to implement CRT.

Our leaders have gender pronoun and trans policy as priorities instead of mundane war-fighting capabilities.

They received advanced CRT training and have learned how to stand up to micro-aggressions.

They’re so focused on the “micro-aggressions” that they lose sight of the macro ones. Like your 2 biggest adversaries forming an alliance.

Something China and Russia could never accomplish in prior decades is about to happen on the watch of Biden.