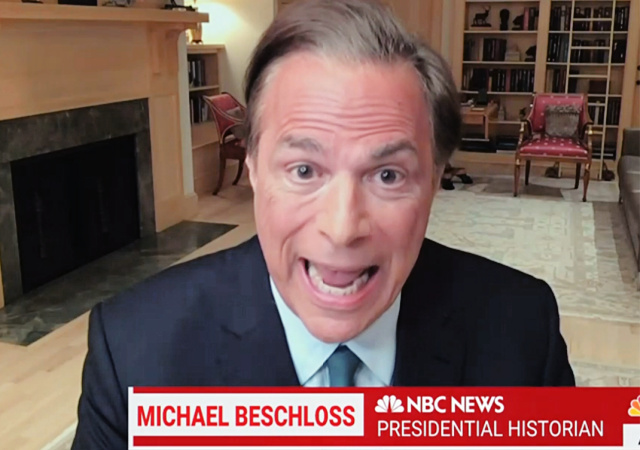 The last time we heard from NBC historian Michael Beschloss, he said that if Republicans won the midterms, children would be arrested and possibly killed.

Now he is wondering why some lawmakers weren’t applauding Zelenskyy during his speech to Congress this week.

For any Members of Congress who refused to clap for Zelenskyy, we need to know from them exactly why.

Is this still the United States of America? I’m really beginning to wonder.

Conservatives on Twitter hammered NBC News presidential historian Michael Beschloss for a “Soviet”-sounding tweet demanding to know who exactly did not clap for Ukraine President Volodymyr Zelenskyy during his address to Congress on Wednesday.

Zelenskyy traveled to the U.S. on Wednesday, his first trip outside of Ukraine since Russia invaded the country in early 2022. During his trip abroad, Zelensky met with President Joe Biden and addressed a joint session of Congress, seeking continued support U.S. and funding of the war with Russia.

Most members of Congress supported Zelenskyy’s message as he was given a standing ovation for his speech. Although Beschloss seemed very curious about who in Congress may not have been enthusiastic enough about the speech or providing further support for the eastern European leader.

On Wednesday evening, the historian tweeted, “For any Members of Congress who refused to clap for Zelenskyy, we need to know from them exactly why.”

This is a historian?

For any Members of Congress who refused to clap for Zelenskyy, we need to know from them exactly why.

You can get into a lot of trouble for not applauding hard enough in places like North Korea. https://t.co/N3TuOxpyDI

It’s well known that when Stalin spoke to crowds, the NKVD would monitor people to determine who wasn’t clapping or who stopped clapping first. This often resulted in applause sessions that seemed endless. https://t.co/F5nmkty4vh

“Presidential historian” who warned last month on national television that “our children will be arrested and conceivably killed” if the GOP did well in the midterms… is now demanding for U.S. lawmakers to be in complete and total lockstep on Planet GroupThink: https://t.co/o0juFamKYd

In communist Russia people were forced to clap for Stalin after a speech, and the first one to stop would be sent to prison. https://t.co/LXk2gR2cE9

How very Soviet to demand a list of people you consider insufficiently supportive. https://t.co/ArFHPlnyBp

Support for Zelenskyy and Ukraine is clearly the new ‘current thing,’ but the left’s blind devotion and groupthink is disturbing.

Tucker touched on this last night. Watch the segment below:

"They applaud, all of them. Almost like they have to." pic.twitter.com/3EegIuXdd9

When I get an actual, non-word-salad answer to the question “What is the U.S. national interest in supporting Ukraine other that simply opposing Russia and Putin?” maybe he’ll be entitled to an answer to his stupid question. Until then, this silly wanker can bugger off.

That’s pretty much it. Putin is a nationalist and increasingly the rest of the world is going globalist and the globalists want Russia’s resources. And the sawed-off dictator who is the King of the “Uraniums” is the US installed hero president so you better sing his praises.

This is really scary that they’re demanding people clap for this turd. The last time the left and their lapdogs in the media was/were fawning over someone like this was Michael Avenatti.

Who does not want to be seen as not clapping or not doing so vigorously or worse yet, stopping before everybody else? North Koreans, Iraqis under Saddam Hussein, or Russians under about anyone or Chinese at the CCP annual meeting. All have minders watching. I guess Beschloss would like to hold this job .

Beschloss is going to look like a total fool when Musk releases “Twitter files #12: the Ukraine money-laundering operation.”

How are we supposed to tell the difference?

Lots of people demand conformity in politics these days. Stray only a little from the view of the mob or their masters and the attacks roll in. Suddenly one is insufficiently devout in their eyes and is attacked for holding and expressing heterodox ideas. This occurs from the left and the right though much more pronounced from the left.

What is this obsession with defending Ukraine?

Our uniparty rulers have been using Ukraine to launder money to enrich themselves. If they don’t give him what he wants, he is probably threatening to expose….

We have given more to Ukraine than the rest of the world combined. So intead of going to some other countries for a change, Zelensky comes here and begs for more. We should just clap our hands and get down on our knees and tell him he’s a hero.

This is actually one job Biden SHOULD put Kamala in charge of. She’s fully qualified.

Distraction mostly. It’s a slight of hand exercise.
Consider that when we are focused on Russia and Putin the things we are not focused on:
1. Our true geopolitical /Strategic foe – CHINA
2. Failed domestic energy policy – blame Putin instead
3. Rampant Inflation – blame Putin not decades of Fed govt overspending and the failure of our leadership class to deal head-on with the housing bubble instead of kicking the can to where we are now at then end of the road
4. Domestic political policy failures; see bat crap crazy Covid lockdown after effects still working their way through our economy – blame Putin
5. Failure to protect the sovereignty of the USA at our borders. Russian invasion is much more important than the largest unlawful migration in modern US history.

We know that because that’s what the legacy media talks about, writes about and broadcasts video of; all Russia all the time with brief interludes to bash Trump and r in general.

I’ve been more or less neutral on the whole Ukrainian/Russian thing, for the reason that it started out more or less getting back at Russia for all the proxy wars we’ve gotten bogged down into for the past 70 years, wasting American lives and treasure. Unfortunately, the same people who got us into those proxy wars are still in charge, and so inevitably we’ve ended up the ones spending the treasure, and sooner or later will likely be wasting lives.

Beschloss is a crackpot, a fool.

Took the words right out of my mouth MA.

Let’s start with the fact he’s a grifter and move to the fact WE DON’T HAVE THE MONEY. He sure is no Churchill.

Answer: not every member of congress is a performing seal, clapping on cue. In all the photos I have seen of the houses of congress, neither have a light-up “Applause” sign.

As for the question “Is this still the United States of America”, yes. It is, Just not the one pre-Johnson, or, pre-Roosevelt.

This is the kind of stupid, insane really, crap that if some elitist prick said to your face you’d just beat the f*ck out him for the fun of it.

Soon he will complain that the clapping wasn’t long enough and that there were no tears of joy wept. We aren’t North Korea … yet.

The only thing that vile c*nt respects is the grift.

Overall, I would prefer that Russia not to expand by violence. However, I am not interested in spending billions of dollars, possibly with an open ended obligation to prop up the dictator in Ukraine.

Also, we have some military aged men who fled Ukraine rather than fighting for their home country. Why do we allow these cowards to stay here?

Me? Much as Henry Kissinger said about the Iran-Iraq War, it’s a shame both sides can’t lose.

I’d rather we spend the money to secure our own borders before we worry about Ukraine’s. Beschloss is an unserious fool.

I said when this whole crap started.

Ukraine was nothing more than an excuse to launder tens of billions (now HUNDREDS OF BILLIONS) of dollars through a corrupt shithole with no accountability.

Literally EVERYBODY that I don’t trust is DEMANDING that you slavishly support Ukraine.

they figured the gig was up in Afghanistan so they moved the grift over to Ukraine. Putin is perceived as much more evil than the Taliban today.

So many sick people

I can’t take Beschloss, that nomenklatura Stalinist jackass, seriously, at all. He is a monumental failure as an historian; a complete fool as a political operative; and a pile of dog waste in general.

Idiocy is the norm for those hardcore Ukraine supporters.

Mr. LaChance, I completely agree with your “North Korea” comment. He is clearly more a hysterian than a historian.

Somebody needs to spike his eggnog with some Thorazine.

Once I saw the word “Beschloss” I knew this was a Leftist hit piece. Historians look at history from all angles. He’s a partisan political hack with only one angle.

Beschloss should be ashamed of himself for writing stupid crap like that. Oops I forgot lefties have no sense of shame.

Other than being a jack-booted thug and, very likely, embezzling a lot of that American aid, what’s not to like about Zelenskyy?

The question he should be asking is why so many cheered for a human trafficking fascist dictator who has eliminated opposition press, parties and suppressed religious faiths.