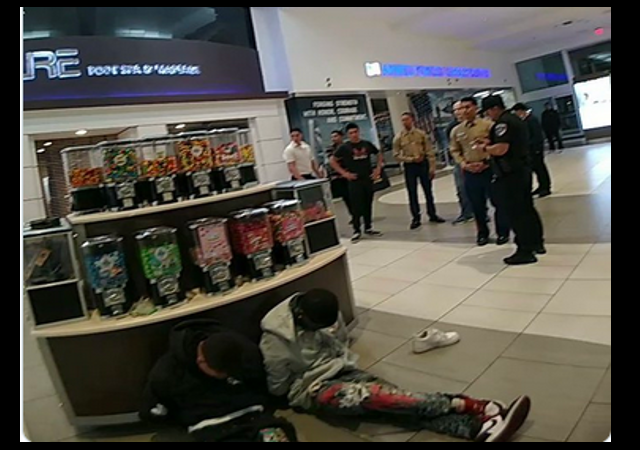 I have been covering the surge in bold daytime robberies in California, exacerbated by closing prisons and criminal-supporting sentencing policies.

The luck seems to have run out for one band of Christmas-time robbers who encountered Marine recruiters from a nearby military recruitment center at the Del Amo Fashion Center in Torrance, California.

The robbery happened Tuesday, at a jewelry store in the mall. According to Torrance police, four people wearing hoodies and covering their faces used hammers to smash the glass of the display cases and grab as much jewelry as they could.

Two of the suspects were able to escape, but the other two were taken to the ground by Marine recruiters and bystanders who heard the robbery unfold, and were able to detain the two suspects, both minors, until police were able to get there.

“[It was] the Marines. The Marine Corps… They stepped up, they tackled them down,” said Ralph, who captured the robbery on video. “Two got away, two got tackled down, and they stepped it up. That’s enough. Time to fight back.”

The two minors were taken into custody. Police also said that they were able to recover a “large amount” of jewelry from the scene.

Officers responded to masked suspects with hammers & gloves stealing from a jewelry store within the mall. The suspects fled but nearby military personnel & by-standers held 2 suspects until TPD arrived. Great work to all involved & shout-out to @USMC Recruitment #SouthBay! 🇺🇸👏 pic.twitter.com/RH8ZdjpODr

Unfortunately, Marines cannot be stationed everywhere in California. Police are now alerting people to be careful as a spike in violent “bank jugging” robberies is rising across Southern California.

“Bank jugging” involves thieves staking out potential victims in bank parking lots while following them to their next destination in order to rob them. They typically target those who have withdrawn large amounts of cash.

Busy shopping centers are prime spots for suspects searching for their next target.

“These are dangerous crimes,” Lt. Derek Green with the Burbank Police Department tells KTLA’s John Fenoglio. “The crime is usually when a group of people follow unsuspecting victims to a bank and wait for them to withdraw a large amount of cash. Once the victim leaves the bank, they follow them to their intended destination.”

Californians may not be safe without the aid of the US military, but at least we have sunshine and temperatures in the double digits.

Minors, committing adult crimes, should be treated as adults.

But this being Cali, it doesn’t mean too much

It doesn’t mean much anywhere.

As for me, my view is we need to stop protecting minors from publicity. This bit where “kids” under 18 are protected from being named or pictured is outmoded. Ghetto trash, or young meth heads need to be exposed early.

The youngster shoplifting a candy bar, or the young teen shoplifting condoms because he’s to embarrassed to go to the check-stand is one thing nd can be handled quietly.

Kids the same age wielding a gun, or smashing a display case and stealing is what I mean. These are not “kids” who will straighten up and go on to productive lives. They are already gone and need to be treated so. Also, none of this released at 21 stuff If the crime has a 10 year sentence for an adult, that 15 year old should serve until 25.

Yep. Our society needs to decide exactly what adulthood is and then stand by it.

“Adulthood”, as far as crime is concerned, should not be tied to an arbitrary age.

Fabric of society is breaking down because we are not addressing organized crime in a meaningful way. Allowing these budding criminals to get away with this stuff is only going to lead to much worse later.

When it is one or two thieves, normal law enforcement protocol is ok, when it is mob, lethal force should be on the table.

Our society has become far too soft.

This starts with stealing the “little stuff”. Where are all the parents that should be raising these kids? It seems they want nothing to do with them until they get shot by law enforcement. Then they are ready to sue the pants off a city or police for doing their job. For those that are crack heads, that’s your choice. DEAL WITH IT!! It will save you from Bill Gates, THE GRIM REAPER, from doing his part in eliminating you.

If you drive through any ‘hood neighborhood at 2am in the morning on a weekday, you’re going to see the streets filled with minor children. It’s surreal.

The ghetto types and the (I hate this phrase but here goes…) trailer trash just ignore their kids. The middle class hands them a cell phone set to some noisy game while in restaurants and at home they are parked in front of Wee or a PlayStation.

Shit parents set their children up for failure, like Thugvon, then want to cash in on their death. There should be SYG like protection from lawsuits of this nature. There have been far too many unjustified payouts.

What perfects the story is that the marines are dark skinned. Else, it would be a story of fascist racists quelling a youthful romp with brutal violence.

And, we need to get past that stuff. If it takes light skinned people, or dark Caucasians to bring order and peace to the community, then so be it. It is time to put the “reverends” and the “community leaders” (tribal chieftains) in their place. Tell them to shut the hell up.

Snarking aside, look a their methods and agend. Organizing a community to agitate for someone else to fix their problems, or they’ll break things. Just systematic extortion, dressed up with greivance stories that both put off assessment from outside, and motivate the cannon fodder from within.

And, they need to be told, “no”. And, at the next riot, there needs to be shoot-to-kill orders for looters and those with Molotov Cocktails.

No, not Al Shaprton the tax cheat!

Meh. If you or I had done this, the lawsuits would be flying, and the Soros DAs would have us up on charges. These men will skate because of the optics of doing the same to Marines. The citizen is no longer allowed to protect himself, only the government agent.

At least in dumps like SoCal. I am somewhat familiar with the Del Amo center, and I felt it was dodgy when I lived in the area way back in the 1980s.

Don’t count your chickens, we will probably hear how the Marines are being disciplined for their actions.

Have the recruiters been arrested yet for stopping a peaceful protest?

Obviously the solution here is to ban citizens owning assault hammers. Of course, after prosecuting those Marines, and suing the guy who videoed it for invasion of privacy, civil rights violation, or something.

On the jugging thing. We’ve done the “envelope” system for groceries for about 15 years. We like it. We also do it for dining/entertainment budgets. I keep about 6 months worth on hand and this requires doing sizable withdraws twice a year.

Out of respect for the bank’s rules I don’t CC while in the bank, but because of the jugging probability- lately I’ve taken to bringing it and removing the holstered gun and leaving it with my wife in the car. This is a +1 on why paddle holsters are just fine if the quality is decent.

Armed bank robberies are a thing where I live.

So far as the retailers getting victimized by the smash and grabs… well at this point it’s on them for not hardening themselves as a target. I used to have rodents in my crawl space and attic…now I have traps set around there and all the wiring/plumbing holes are stuffed with steel wool. There’s the same number of rodents and vermin running in the woods, they just choose someplace else to do their damage BESIDES my house.

I have a question.
Would it be considered to be humane to end the life of proven criminals? People who cannot or will not yield to any construct of a working society are a danger to themselves and everyone else. The list is long; repeat killers, repeat rapists, people who have a record of selling harmful drugs on the street, pedophiles, etc. If America keeps embracing these people (beasts in human form) the end cannot be good for the rest of society. At some point the human detritus will overflow any wholesomeness that is possible with a functional society. What is the humane solution? Mass incarceration or death?

These kids know nothing but entitlement, coming from being told they are victims all of their lives, by scum of the earth democrats who need their votes in order to win elections. None of these kids get jobs…they learn to sell drugs, hustle and steal….getting a job is ‘acting white’ and is frowned upon….getting a job is for suckers. So this is how far it’s gone….they bust into stores in broad daylight, expecting nobody to stop them, because after all, they are victims. I’m sure the ‘parents of the year’ belonging to these incorrigibles have already filed lawsuits against these marines, for attacking minors who were just out doing their Christmas shopping.