LA Times downplays the significance of these blazon robberies. 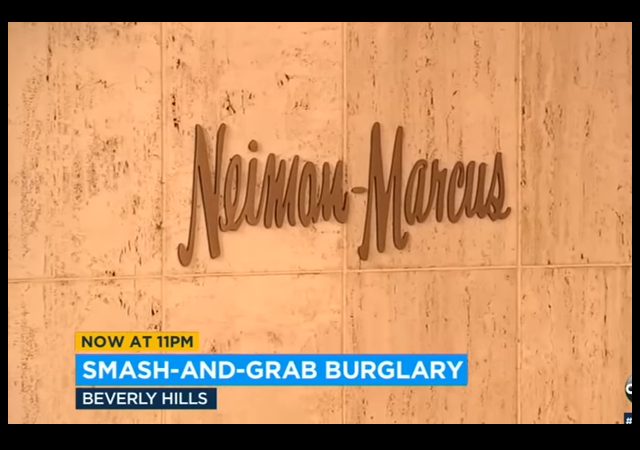 A group of burglars drove a car through the front door of a Neiman Marcus in California early Saturday morning to steal merchandise from the luxury store, police said.

The burglary took place around 4:45 a.m. at the store in Beverly Hills. Officers were dispatched immediately to the store after receiving a report of an alarm going off, police said.

When law enforcement arrived, they found a dark-colored Chevrolet sedan had crashed through the metal gate and window of the store. The suspects had already fled with an undetermined amount of merchandise and goods.

The police chief promises the thieves will be caught.

The city has added more officers to the department and private security guards to patrol the streets. But with thieves continuing to strike, many in the city say more needs to be done.

“My thoughts are helplessness. How did we let the country get to this point where that’s normal? That in a really safe neighborhood like this we have people driving cars into buildings to loot the place. It’s terrible.The city needs new leadership,” said David Thomson.

However, if they are caught, will they actually do time for the crime? In an area where soft-on-crime, Soros-backed George Gascón is the District Attorney, the outcome is anything but certain.

Meanwhile, trust the local newspaper “of record” to downplay the significance of the threat to area residents. This is how the Los Angeles Times chose to downplay the trend of brazen robberies in the high-end areas of the city.

A series of high-profile crimes in upscale parts of Los Angeles — the so-called smash-and-grab and follow-home robbery — have gotten widespread attention in recent months. Police have deployed officers to malls and shopping corridors such as Rodeo Drive and Melrose Avenue. Right-wing media have seized on the robberies as proof that crime in California is out of control.

Yet for all the attention they have received, the brazen crimes make up only a fraction of the city’s burglaries and robberies, which overall have not seen a significant increase.

And, they dare not report a description of the hoodlums.

Nor the car. That one in the video sure looks like a Honda.

Like Voldemort in the Harry Potter series, the color which must not be named.

Given the speech patterns of the likely perps, “unjustice” is how dey>/s> they will pronounce it.

Show the rich woke racist liberals that their insane policies ARE going to impact them too, not just the poors.

Where’s Eddie Murphy when you need him?

He had an appointment with Victor Maitland.

Too bad they didn’t hit it in broad daylight.

They hit the Chanel store the same way a couple weeks ago and just a few blocks east of Beverly Hills. It’s two doors north of the Ivy restaurant, a place to see and be seen by the Hollywood set.

Next thing you know, Ann Heche will crash through someone’s house at 90 miles an hour and destroy it.

Has fox news called it for Cheney yet tonight?

Police Chief “The thieves will be caught”

Gascon: And will immediately be released.

““My thoughts are helplessness. How did we let the country get to this point where that’s normal? That in a really safe neighborhood like this we have people driving cars into buildings to loot the place. It’s terrible. The city needs new leadership,” said David Thomson.”

Any non Dem/socialist will do.

Well, know it’s all about reparations, right?
And this news on the heels of that about insufficient signatures to put a Gascon recall on the ballot.
Sounds as if all’s well in la la land……

I so love watching leftists get what they voted for. Now that the hood is coming to the rich and famous in Beverly Hills, they may start to think twice before they elect another Gascon or send off that check to BLM. When they catch these budding Einstein’s, they will be back on the street in 24 hours with no cash bail. Then rearrested for another smash n grab 24 hours after that.

So, everyone in BH is some leftist?

Did they exceed the equitable and inclusive bag limit?