Is Florida Planning to Sponsor an Apolitical Higher Ed Accreditation Agency? Or Shopping For One?

Is Florida Planning to Sponsor an Apolitical Higher Ed Accreditation Agency? Or Shopping For One?

Although we have not particularly focused on the Florida public universities’ accreditor, Southern Association of Colleges and Schools (SACS), Legal Insurrection and others have noted the politicization of school accreditors generally. 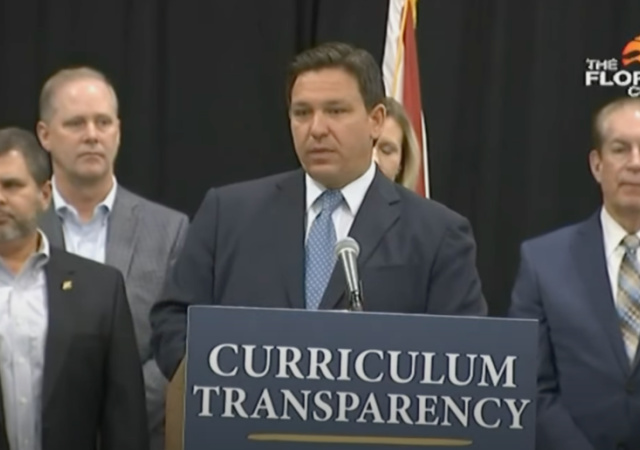 Inside Higher Ed quoted an anonymous college official as saying that the meeting was supposed to discuss accreditation, but the idea was shelved after the Tallahassee Democrat reported about the planned meeting.

According to a new law (Senate Bill 7044), passed earlier this year and signed by Governor Ron DeSantis on April 19, Florida higher education institutions are required to change accreditors when their current accreditation terms expire. The bill also seeks to improve transparency by requiring schools to post their true costs and their teaching materials.

SB 7044 isn’t not the only education-related law DeSantis signed this year. In April, DeSantis signed a package of education reform bills, including in particular the currently-stayed Stop WOKE Act designed to prevent schools from indoctrinating students into Critical Race Theory. At the signing ceremony, DeSantis announced to loud applause, “We believe in education, not indoctrination. We won’t use your tax dollars to teach our kids to hate this country.”

DeSantis and Florida legislators could have been clearer about the purpose of changing accreditors. Still, it seems reasonable to assume that like the other bills DeSantis signed, it’s related to preventing politicization – in this case, of higher education.

Although LIF has not particularly focused on the Florida public universities’ accreditor, Southern Association of Colleges and Schools (SACS), LIF and others have noted the politicization of school accreditors generally. (See, for example, articles regarding the Accrediting Council on Education in Journalism and Mass Communications, American Bar Association, American Medical Association, and National Association of Independent Schools – here and here.) Over the last few years in particular, accreditors have been forcing a political agenda on the schools they accredit, as by imposing Diversity, Equity, and Inclusion and racially discriminatory admissions policies. SACS, which has issued its own DEI policy statement, appears to be similarly politicized.

In the case of the ABA, the nation’s sole federally-recognized law school accreditor, states have enabled its monopoly. LIF has called for states to break that monopoly.

It seems reasonable to suppose DeSantis’ administration is focused on identifying – or helping to create – an accreditor who will focus on ensuring standards and methods, rather than imposing ideology; and that the December 7 meeting was scheduled for that purpose.

Media coverage about the accreditation law (SB 7044) and December 7 meeting has generally focused on assigning unsavory motives to DeSantis. NPR, WFSU (a public television station), Inside Higher Ed, and other media have suggested the move was in revenge for SACS’ actions in opening an investigation into the University of Florida after three professors there were told they couldn’t testify in a lawsuit challenging a voting rights law DeSantis supported. SACS “concluded the university met all its standards for academic integrity.”

Media have also focused on SACS’ actions in critiquing Florida State University’s consideration of Richard Corcoran during its presidential search. Corcoran is Education Commissioner and a member of the Board of Governors. SACS complained that appointing Corcoran would be a conflict of interest and political interference. As the face of DeSantis’ education department, Corcoran has fielded opposition to the governor’s efforts to push back against ideology and oppressive measures like mask mandates and efforts to force girls’ teams to accept physiologically male transgender athletes.

Whatever the reason for it, Florida officials have characterized the meeting in as insipid a manner as possible. The Tallahassee Democrat reported that, according to the Florida Department of Education’s spokesperson, the meeting’s purpose was to discuss system-wide educational goals and to share their best practices with each other. According to a statement the Florida Board of Governors provided to Inside Higher Ed:

“The presidents of the State University System and the Florida College System met on Wednesday to discuss System-wide educational goals regarding accreditation and 2+2 articulation. It is critical the two public higher educational systems in Florida work collaboratively to share best practices on issues which greatly benefit Florida’s students,” read one statement from the Board of Governors.

New accreditation boards are not unknown. The private schools in Hawaii started their own after getting fed up with the politics and wokeness of national boards.

Create a new national medical association and Bar assocation while youi’re at it.

Ron DeSantis is the best we have; and his doing work he knows is never going to grab a single headline shows why.

Did you bother to read the article or are you just here to advocate for never DeSantis?

This article is about bills DeSantis did months ago silently without any press coverage. A bill in April that is first being covered by friends of it in December, and isn’t being covered widely at all is while significant not about publicity.

This very much is what fighting looks like, the reforms covered are going to have a major impact and we not DeSantis are the beneficiaries.

Well said. Thank you. Good job. This is helpful to me in learning how to respond to these kinds of comments from the naysayers.

We believe in education, not indoctrination.
Well, there’s the biggest part of the problem. Education is indoctrination to some degree. Despite the lies the Progressives tell, you cannot communicate “education” in a moral vacuum. Morals are essential to the worldview in which education is valued. And you have a choice among multiple moral worldviews – one of which is Progressivism. And its foundational morals are a perversion of Christianity’s, where they exist at all. And Christian morals is the foundation upon which Western Civ is built. If you eliminate the Christian worldview (as the Progressives did, by claiming to be “neutral”) something else will fill the void (as Progressivism did, per their goal).

preventing politicization
No. It’s simply a change in the religious values held by the people in charge.
It only looks like politicization if you believe the lie that Progressivism isn’t a religion because they don’t believe in some ‘mythical’ god. In reality, it’s a religion they’re indoctrinating your children (and lots of adults) into – one which sees the state as an legitimate instrument of its power and which is happy to use it to advance its kingdom.

I keep beating this drum but Federalism is the answer to many of our problems. The States have many powers to use in thwarting the ideological folks who captured our institutions. Accreditation is one. Pulling State funds and State accounts from woke financial firms is another. Granting a business license and approval by State regulators is another.

Secondary, vs. post-secondary but there’s momentum for something like this with the school boards ditching the natl school board association.

The Great Centralizers miss this trick all the time — it’s only a grand, unified thing because people choose to play together in that pond. You’re at the head of where they want to go.

Plenty of folks try forcing a unity, only to find out how hard conscription really is. Npt impossible, but encompassing and expensive to pull off, and if you “succeed” generates its own counter-forces.

Exactly. Then consider if a collection of States controlled by r legislatures created their own uniform rules and their accreditation bodies oriented away from lunatic fringe ideology. Suddenly the d/prog control of institutions begins to look much more like the blue portions of the National political map.

Schools, Colleges, banking, insurance, finance, investment, healthcare, legal are all sectors where individual States can set their own course and work together to create an alternative to all the current ideologically corrupt institutions.

I love our Governor, Ron Desantis!
He will be a great President