“Over the past several months, law enforcement has made several arrests for ongoing criminal activity at the site, including carjacking, various crimes against persons, destruction of property, arson, and attacks against public safety officials.” 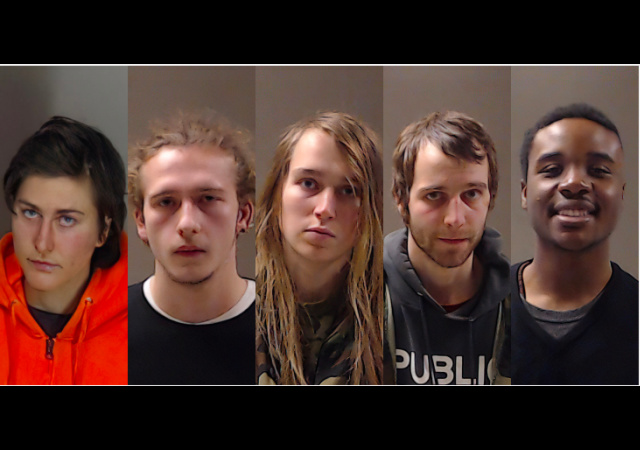 Authorities arrested five left-wing activists in Georgia for domestic terrorism on the site of a future first responders training center.

These activists belong to Defend the Atlanta Forest. They have been in the area for months trying to stop what they call Cop City.

Five people were arrested and charged with domestic terrorism and other charges after a joint task force operation at the site of the future Atlanta Public Safety Training Center.

Andy Ngo and The Daily Mail described the accused as members of Antifa or linked to Antifa.

Francis Carroll, a 22-year-old from Maine, was charged with criminal trespass, domestic terrorism, aggravated assault, felony obstruction, interference with government property and possession of tools for the commission of a crime.

Nicholas Olson, a 25-year-old from Nebraska, was charged with domestic terrorism, aggravated assault, interference with government property and obstruction.

Serena Hertel, a 25-year-old from California, was charged with criminal trespassing, domestic terrorism, aggravated assault, obstruction and inciting a riot.

Leonardo Vioselle, 20, from Macon, Georgia, was charged with criminal trespass, domestic terrorism and possession for tools of the crime.

The Guardian featured Hertel in a story about this autonomous zone. Open Society Foundations sponsored the story in the leftist publication.

George Soros is the chairman of Open Society Foundations.

Richard Porter said the group threw stuff at him, “including a ‘gas bomb.'” The bomb hit his truck, and he had to flee as the fire destroyed his truck.

Porter said it seemed like they didn’t care if he was in the truck or not, as it burned.

So these kids bought an Antifa franchise in Atlanta?

We need to get back to treating adults like adults and roll back that extended adolescence concept.

Our lawmakers are now extended adolesents:

Why AOC Is Under Ethics Investigation
https://freebeacon.com/parody/ocasio-cortez-ethics-scandal/

Trust NPR to immediately blame it all on racism.

AOC is as white as any other Caucasian.

Indeed. Either treat 18 year olds as adults or remove adult rights and privileges until whatever age is selected as the entry point threshold to accepting adult responsibilities and consequences.

With diversity…. or at least by two… sex…er … gender…. and race! The ratios are about right…

They got that part right.

Good point, these are not “kids”. These are idiots who will never make their parents or friends proud of them. . 4 of the 5 are out-of-staters. I guess the Calif idiot was tired of being attacked all the time and the police never helping, so they got to GA to whine about the police there. Maine, Calif, Nebraska, Wisconsin. All full of left wing marxists who have no real intelligence, honor or integrity. The are showing their true colors being stupid as they are.

If they threw a gas bomb at a truck with a person in it why isn’t there a charge of attempted murder?
Don’t these dweebs know that the days of unlimited amnesty for rioting over Floyd are over?

“ Don’t these dweebs know that the days of unlimited amnesty for rioting over Floyd are over?”

Not surprisingly Antifa is expanding

It probably gets the guys some advantage with Gen Z women. The old bad boy thing…

“Seemed to me like they were trying to burn the truck with me in it.”

none of them will last a week in the county jail

“even a black ringer in the bunch”
SOMEBODY had to be the local.
The rest of them practically needed passports.

“Porter said it seemed like they didn’t care if he was in the truck or not, as it burned.”

Typical sociopaths. The clown on the far right has a sh!t eating grin on his mug for a reason: Atlanta is in Fulton County. It’s almost a far wack-a-doodle left as any yankee city infested with crime, corruption, and feces.

Fulton county almost put twice-failed gubernatorial candidate Stacy ‘thar show blows’ Abrams in the governor’s mansion, and it was a key demo in demonizing MLB, and forcing the All-Star Game out of state.

It’s newly elected D.A. has no business in any position of authority, imho. She’s a far-far left Soros cockholster whose first act in office was to launch a criminal investigation into Donald Trump’s attempts to call out Georgia’s 2020 election stealin… er, uh, oddities, like middle of the night water line breaks above the ballot counting office, etc.

None of these domestic terror clowns will get bail imposed, let alone see the inside of a federal pen.

Throwing a Molotov cocktail at someone is a good way to get your ass handed to you around here.
That is the reason they dare not venture outside of a city.
Ask yourself…do you feel lucky?

Until such an event happens to them, little will change. Leftists don’t back down until they take casualties.

And even then they’ll demand the person who defended himself be tried for murder.

Look at those mug shots. Those are the faces (especially the punk on the right) of people who just don’t get it. They’re in serious trouble… and I doubt any of them understand that.

Antifa are LARPing as revolutionaries, and we’ve indulged their fantasies for far too long. I hope every one of those smug little assholes are sent to federal prison for a long time.

I expect Biden to invite them to the WH pretty soon for the Medal of Freedom ceremony.

And Kamala to start a fund for their bail money.

These “people” are trying to prevent the cleanup of an illegal dump site.

From the Environmental Site Assessment:

…Over time vegetation has become overgrown on what is left of the building structures and throughout the site. Vagrants and trespassers have since covered the walls of the structures with graffiti, and dumped debris containing hundreds to thousands of tires, paint cans, and household trash throughout the northern portion of the site.

Tie them to trees deep in the forest, walk away. Reunite them with nature.

But were they carrying tiki-torches, wearing Khaki’s?

When I read the headline, my first thought was, “I bet it wasn’t the feds who arrested them.”

And, of course, it was state authorities.