Does Warren care about Tesla shareholders? Nah, she just thinks she’s found a pressure point on Musk. Nice car company you have there, Mr. Musk, shame if something happened to it. 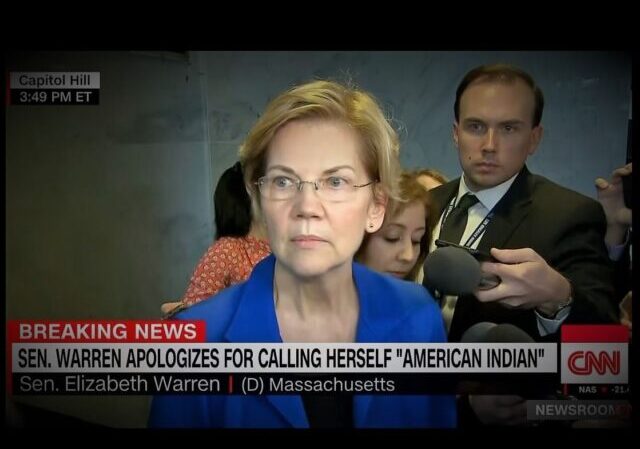 Elizabeth Warren lived much of her professional life as a fraud. She claimed to be Cherokee without any demonstrable factual basis in order to climb the law professor ladder to Harvard. She lied, and lied, and covered up, and only when she couldn’t cover up anymore and it was hurting her 2020 presidential primary campaign, did she give a tepid non-apology apology.

We documented her Cherokee ethnic fraud in greater detail than anyone at our ElizabethWarrenWiki.org website. Read it. It eviscerates both her claim to be Cherokee and her supposed “family lore” stories like her parents’ alleged elopement and her Aunt Bea “high cheekbones” story.

Not only did she misappropriate Cherokee identity, she mocked them with absurd non-native recipes in the Pow Wow Chow Cookbook:

Imagine living so much of your life in a lie, and then having a holier than thou attitude on just about everything in politics. She has never been held accountable.

But wait, that’s more. Warren misrepresented her private legal practice while a law professor as trying to help the little guys and gals against big bad corporatation, when the reality was the opposite. Warren was a corporate shill and raked in hundreds of thousand of dollars.

She also is a serial fabulist, telling absurd stories about being the first nursing mother to take the New Jersey bar exam, having been sexually harassed by an old professor, and having lost a job due to pregnancy.

Warren also maintained an office for the practice of law in Massachusetts without a license.

But more than an ethnic fraudster and fabulist, Warren made a name for herself in academia as reportedly having “sharp elbows.” Indimidating and bullying people into submission was her academic persona and it carried over to politics. She loves to threaten people using her Senate perch.

Elon Musk felt her wrath long before he purchased Twitter.

And if you opened your eyes for 2 seconds, you would realize I will pay more taxes than any American in history this year

Please don’t call the manager on me, Senator Karen 🙏

Speaking on “The Late Show” Wednesday, Warren told host Stephen Colbert that she is opposed to the social media platform being owned by anyone with the level of power and riches held by Musk….

Twitter is “most used to promulgate political idea and argument,” Colbert said, bringing up the topic of who should be making the decisions that determine what content is posted on the platform.

Warren described how she sees the calculus at play behind those decisions.

“Somebody is going to make the decisions about what we see on Twitter. It can be made out in the open, it can be made in public, it can be made by a commission… or it could be made by one billionaire in a very dark room based on whatever is running around in the middle of his head,” she said.

“I don’t think any billionaire ought to be the one who has that kind of power, to decide how Americans, how people around the world get a chance to talk to each other,” Warren said. “I got a real problem with him.”

Warren never spoke out when conservatives were purged from Twitter under the old regime. She doesn’t care about the integrity of the platform, she cares about power to control political speech that she and other Democrats see slipping away. That’s fine, she has a right to be a hypocrite, but how Warren is going about it is not fine.

Rather than addressing the Twitter handling directly, Warren has sent a letter to Tesla’s Board of Directors suggesting that Musk has violated his duties to Tesla in the running of Twitter.

The NY Times reports, “Elizabeth Warren Prods Tesla About Elon Musk and Twitter  – In a letter to board, the Democratic senator asks whether the carmaker’s investors have been harmed by the billionaire tech mogul’s time running the social network.”

Now, DealBook is first to report, Senator Elizabeth Warren, Democrat of Massachusetts, is taking aim at an issue with more serious potential legal consequences: whether Mr. Musk has created a series of conflicts of interest with and misappropriation of resources from Tesla, the electric carmaker he also runs.

“As you know, it is the legal obligation of Tesla’s board to ensure that its C.E.O. is meeting all his legal responsibilities and serving as an effective leader,” Ms. Warren wrote in a letter to Robyn Denholm, Tesla’s chairwoman, on Sunday night. (Ms. Denholm did not respond to a request for comment.) While the chaos at Twitter isn’t Tesla’s concern, Ms. Warren raised the possibility that many of Mr. Musk’s actions may be shortchanging Tesla.

“The problems identified in this letter are not merely theoretical,” Warren wrote, noting that Tesla’s stock has fallen sharply this year and remains under pressure. That includes both the perception that Mr. Musk is distracted and his disclosure of billions of dollars worth of stock sales, with the prospect of more, which could be used to help out Twitter or meet margin requirements for loans he took out to buy the company.

Does Warren care about Tesla shareholders? About as much as she cared about the Cherokee whose identity she misappropriated, whose culture she mocked, and whose history she exploited for her own advancement. When a Senator sends such a letter to a company, it’s not to obtain information, it’s an implicit threat.

Nope, this isn’t about Tesla or its shareholders. If those shareholders think Musk has violated any legal duties, there are hundreds of lawyers champing at the bit to bring that case. The shareholders don’t need Elizabeth Warren.

Warren just thinks she’s found a pressure point on Musk. It’s what you would expect from organized crime protection rackets:

Nice car company you have there, Mr. Musk, shame if something happened to it.

It is an utter disgrace that Big Chief Pimple-on-her-tongue remains in the US Senate.

That’s not a pimple — she paid good money at Pino Bros to have it installed.

Every chance I get, I try and vote my 2 Mass hole senators out of office.

Never forget the letters they leave out of “D-MS;” they are DuMbAss.

What is her fascination with “billionaires in very dark rooms?” Is it part of her psychosis/fantasies?

And when did she EVER have a problem with Zuckerberg or Bezos etc. making decisions “based on whatever is running around in the middle of his head?”

I apologize for Massachusetts’ choice of senators. Again.

Realize that MS is Mississippi.
The one that always gets me is that AK is Alaska, not Arkansas.

But we’re surrounded by brain dead morons who would vote for a potted plant if it had a “D” after its name, see Markey as an example.

I urge all conservatives to join Twitter and be heard. Advertising is coming back, and it is important to help make it break even.

I don’t bathe in the sewer.

If they would unban my account without requiring my cell phone number then I would rejoin.

I’m old enough to remember when Democrats went after Bill Gates using the same script. That is, until he started “donating” to their campaigns, and then it all went away.

Yes, and at the time, HE was the richest man in the world, was he not?
Gee, a baby could see a pattern here.

Man with most wampum in world laughs.

“Ms. Warren also suggested the possibility of Mr. Musk intentionally shortchanging either Twitter or Tesla to benefit the other, including Twitter potentially overcharging Tesla for ads or tweaking the social network’s algorithms to benefit the carmaker…

This is ridiculous; Tesla does not spend money on advertising.

Remember: she was hired at Harvard for her alleged ethnicity, not her brains.

She was an affirmative action hire for all intents and purposes.

“She also is a serial fabulist, telling absurd stories about being the first nursing mother to take the New Jersey bar exam, having been sexually harassed by an old professor, and having lost a job due to pregnancy.”

Not the same professor she gave a Purple Heart to, was it?
My mistake, it was a Purple Nurple.
Hiawatha for President! “We HAVE the WHOPPERS!”

What was Musk doing with his vote me in or out poll?

That and very likely using it to confirm a decision already made in private. The dude has likely already identified a management team to run it for him. It isn’t as if the manager he hires wouldn’t be expected to implement the vision and policies Musk wants.

And what’s funny is that the left fell for it. They don’t understand how to fight him.

He followed it with a tweet to the tune of “be careful what you wish for, it may come true.” So my tinfoil hat whispers to me that he’s about to hand over the helm to someone the proggies will hate twice as much. Like Trump but it won’t be Trump.

The most powerful action that any American can exact is their time spent at the polls. Unless you prefer to cheat by mail.

There’s no doubt that some people love the tenacity of prevaricators who can exercise this ‘gift’ without raising a sweat.

And they (voters and supporters of their Chieftain Warren) walk amongst us.

Their rank fear of free speech is only superceded by their blatant hypocrisy about how the company is run.

I don’t see Princess Grey Beaver going after Zuckerberg or Bezos or Sulzberger or the many America destroying manifestations of George Soros.

For the record, vile termagant, Fauxcahontas’s, “Cherokee” recipes were plagiarized from recipes by Pierre Franey, the late, famous French chef who had co-authored a long-running recipe column in the New York Times with Craig Claiborne. That’s how brazen and flippant Fauxcahontas’s inauthentic and farcical recipe stunt was.

Warren , who is a seriial liar,is a younger version of Biden

The vile harridan, the insufferable, miserable and useless Warren, believes that the FBI should have power over social media, instead of “billionaires.”

And, I’m sick of how these Dumb-o-crat twits can always land a sympathetic platform/pulpit on television shows hosted by water-carrying, Dumb-o-crat sycophants/lapdogs/lackeys, such as the insufferable and obnoxious Colbert, and his ilk.

The fraudster is only sorry she got caught!