Conflict of Interest Issues Arise as Sec. of Interior’s Daughter Lobbies for Moratorium on Oil and Gas Leasing

Conflict of Interest Issues Arise as Sec. of Interior’s Daughter Lobbies for Moratorium on Oil and Gas Leasing 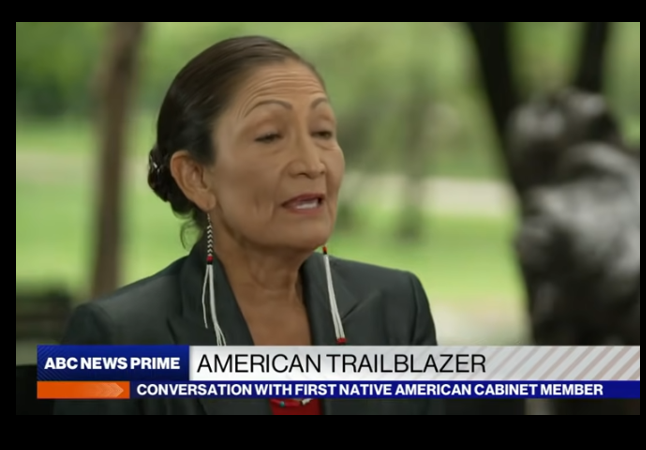 When the history of the Biden administration is written, it will be exceedingly difficult to determine which of his appointments have been most destructive to this nation.

One of the leading contenders must be Biden’s Department of the Interior Secretary Deb Haaland. The last time we checked in on her team of social-justice-focused, eco-activist-oriented bureaucrats, they walked back the required auctions for gas and oil leases necessary to this nation for its energy industry.

Now a significant conflict-of-interest issue has arisen as her daughter, Somah Haaland, is lobbying federal lawmakers to support a moratorium on oil and gas leasing near a historical site in New Mexico.

…In addition to lobbying lawmakers, the activists screened a film narrated by Somah Haaland that “showcases the threats” posed by oil and gas leasing in the region,” according to the WildEarth Guardians. Sen. Martin Heinrich, D-N.M., and Rep. Teresa Leger Fernandez, D-N.M., attended the screening along with “agency officials.”

Meanwhile, the Bureau of Land Management (BLM), a subagency within Secretary Deb Haaland’s Department of Interior (DOI) that is tasked with managing nearly 250 million acres of federal lands, is expected to soon finalize a rule acceding to activists’ demands. Earlier this month, the agency closed a comment period for its proposal to withdraw 351,500 acres of public lands within 10 miles of the Chaco site for 20 years.

And while Haaland seemingly won’t permit fossil fuel development in the West, she is actively promoting the use of these lands for solar energy installations.

During a visit to the Sonoran Solar Energy Project in Arizona – a project on public lands expected to power 91,000 homes – Haaland announced a new process to develop a West-wide solar plan that will kick start the Biden administration’s plan to permit at least 25,000 megawatts of renewable energy on public land by 2025 as part of the Energy Act of 2020.

The new process is meant to identify areas with high solar potential and low conflict potential in order to “guide responsible solar development and provide certainty to developers.”

In addition to the absurd level of conflicted interest, concerns have surfaced about if solar energy is environmentally friendly. Residents around New York’s Fort Edward Grasslands have questions about a proposal for a solar project in that habitat.

According to GBT, more than 100 species of birds breed, winter or migrate in the grasslands in Fort Edward, Argyle and Kingsbury. A winter resident, the short-eared owl, is endangered in the state. Once New York’s most common owl, the population is down to only 50 breeding pairs statewide. Ten other birds that winter or breed there are threatened.

There’s very little science on the effect of ground-mounted solar panels on birds, [Katherine Roome, a GBT board member] said. Small birds like the Henslow’s sparrow, eastern meadowlark, bobolink, and sedge wren, all threatened in New York, may be able to forage and nest in the grass under the rows of panels and their posts.

By contrast, raptors like the short-eared owl and state-threatened northern harrier and American kestrel hunt by sight and fly low over the ground. Roome called it “highly doubtful” that the birds can dodge the panels and still capture their prey.

“We’ll be the test case for how grassland birds live with solar panels,” Roome said. “We don’t want our birds to be used as lab rats.”

I hate to break it to Roome, but we are all being used as lab rats under the current administration in some form or fashion.

Here’s hoping our energy industry and wildlife survive until more competent and America-focused policymakers are in place.

None of the rules apply to this administration. It’s all naked power and greed.

There is no conflict as they all believe the same things…. conflict only occurs if you don’t believe like they do.

Coleridge, an essayist and op-ed writer as well as earlier a poet, wrote that a conflict of interest is the pulley on which good character is hoist into public view.

Will the borrowers of the sun God make war on the great soaring eagle? We must leave this question to chieftess Shaking Head Elizabeth Warren.

For the Biden regime, a conflict of interest is known by a couple of terms; oppournity and/or Devine right.

This is environmentalist radicalism in full display

Bear in mind that lobbying is a constitutional right. Being a secretary’s daughter doesn’t change that.

No, but being a Secretary’s daughter means you shouldn’t be violating conflict of interest laws and regs by lobbying your own mother’s department.

There are no such laws or regs. There can’t be, since they would be unconstitutional. Lobbying is not a privilege, it is a right, just like owning a gun; attempts to limit both of those rights are mostly associated with the “Progressive” movement and with Democrats.

Huh? Are you claiming that somewhere in the long chapter you linked to there is something that purports to restrict a person’s constitutional right to lobby a government department just because her parent happens to be in charge of it?!

Where exactly do you see such a restriction?

And if you do see one, how do you explain how it can possibly be valid? Where could Congress possibly get the authority to make such a law?

You have to understand that while this would be a conflict of interest under the old legal/constitutional structure, under the current one it is merely the exercise of the seigneurial rights of the aristocracy. Somah Haaland is the acknowledged legitimate daughter of a member of the Presidential Cabinet, and therefore may conduct government business for her and her family’s benefit, assuming that proper payment is made to their superiors. Right?

Seems odd to be lobbying for what Biden’s handlers have already, in fact, been doing since the day he took office.

Oil/gas leases, last I checked, were being issued at a rate of under 1% of what the Trump administration was doing.

Get used to being oil dependent on the Middle East again. What Democrats have done to us here will take years to undo. If ever.

During a visit to the Sonoran Solar Energy Project in Arizona – a project on public lands expected to power 91,000 homes

I looked that project up. They claim to generate 260 megawatts of electricity (at daytime, obviously) and, even better, plan to waste a metric shit-ton of money on 260 megawatts of battery storage (that’s a pretty penny, not to mention the cost of replacing the whole lot every 8 years, if they’re really, really, really lucky). All this on the modest ground of just 3,300 acres … just 5 square miles of solar arrays – as far as the eye can see, essentially. All this to (allegedly – Ha!) power 91,000 homes. Yeah … sounds like a great idea.

As to politicians’ family members lobbying the government as their “job” – and even better, lobbying mommy’s department – we all know that this is the worst sort of open corruption and these are situations that really call for the “wisdom of mobs”, as it were.

BTW … just a quickie calculation, 260 megawatts divided by 91000 homes leaves only 2.9 kilowatts per house … which ain’t much of a life.

And they say “260 megawatts (MW)” of battery storage, but I assume they meant megawatt-hours. Although, they are only supposed to be an energy company. What would they have to know about the difference between “megawatt”s and “megawatt-hour”s?

One of the pages they say that is here

Another unqualified diversity hirer by Brandon makes stupid decisions. Drilling for oil and gas will harm the environment but not covering the entire landscape with solar panels. A radical climate activist has no business directing any federal agency let alone the one she was installed in. Too bad Cocaine Mitch is too comfortable in the swamp to challenge funding for the entire agency.

Right. What perfectly-avoidable ecological travesty will be committed when the Winkle-Footed Toad Humper is forced to live in permanent eclipse?

I don’t know why she’s bothering to lobby. That’s not how Democrats get things done these days. Executive departments prefer instead to make binding settlements with friendly litigants that they could not lawfully make otherwise.