Hamas tells Palestinian youth to “follow in the path” by “killing multitudes.” 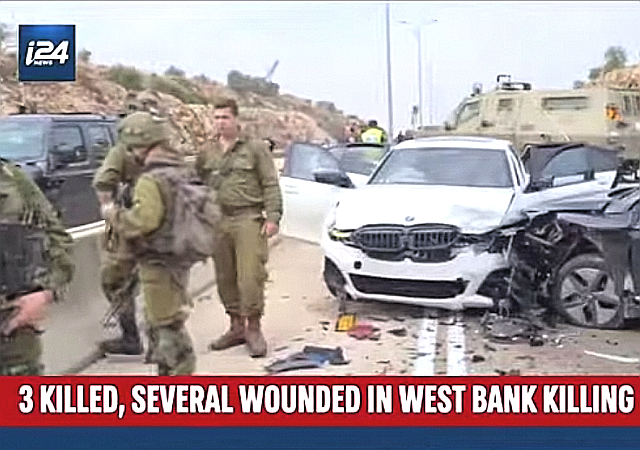 While the United Nations overwhelmingly voted in favor of yet another anti-Israel resolution, and the Biden DOJ opened a bizarrely-timed probe against the Israeli military, the Palestinian terrorists continue to murder innocent Israelis, and their supporters celebrate these killings.

On Tuesday morning, three Israeli fathers were murdered by a knife-wielding Palestinian man who went on a killing spree near Ariel. The terror attack triggered a wave of celebrations in Palestinian-controlled West Bank and Gaza, with masked gunmen and ordinary Palestinians distributing sweets and rejoicing at the gruesome act of terrorism.

The victims were identified as “Tamir Avihai, 50, … from [the] settlement of Kiryat Netafim; Michael Ladygin, 36, immigrated 5 years ago, lived in Bat Yam with his family; Motti Ashkenazi, 59, had two grandchildren.” The Times of Israel reported.

This video supposedly of the Jenin Battalion sharing sweets in Jenin to celebrate the Ariel terrorist attack was shared by Palestinian media. pic.twitter.com/uGLpkHcyFF

The Israeli broadcaster Ynetnews reported the details of the terrorist attack:

A preliminary investigation of the attack showed that the terrorist, identified as Mohammad Souf from the Palestinian town of Hares, first attacked the Israeli guard at the entrance to the settlement’s industrial zone, then proceeded to a nearby gas station and stabbed three more people there.

He then stole a car, intentionally collided with another vehicle on a nearby highway and struck another person and attempted to steal another car before being stopped and fleeing the scene on foot. He was finally shot by soldiers and civilians on the scene.

(On a personal note: In early 2016, I visited Ariel, including the above-mentioned industrial park, which employs Palestinian communities living nearby under the PA’s rule.)

3 Israeli Jews were massacred by a Palestinian terrorist in #Ariel, leaving 11 children without a father, and the #Palestinian leaders, incl. Abbas, celebrate their slaughter.

Somehow all those who did not waste breath to condemn make-up of Israel’s govt are completely silent! pic.twitter.com/X5Bxuez1EG

The Gaza-based Islamic terrorist group Hamas hailed the latest attack on innocent Jews and called for more bloodshed. “The Hamas terror group hails today’s terror attack in the Ariel settlement in which three Israelis were killed,” The Times of Israel reported Tuesday.

“The Hamas statement also encourages Palestinian youth to ‘follow in the path’ of Ariel attacker Muhammed Souf ‘by killing multitudes among the enemy,'” the Israel news outlet added.

Several Palestinian factions praised Tuesday’s terrorist attack in the northern West Bank in which three Israelis were killed, saying it underscored the failure of the Israeli security forces to subdue the “resistance.”

The factions described the attack as a “heroic operation.” (…)

In some parts of the West Bank and Gaza Strip, Palestinians were documented celebrating the attack by handing out sweets to passersby and drivers.

“The operation demonstrates the ability of the Palestinian people to continue their revolution and defend al-Aqsa Mosque from daily incursions,” Hamas spokesman Abdel Latif al-Qanou said.

This year, Israel has been in the grip of Palestinian terrorism since the Muslim month of Ramadan triggered a wave of attacks against civilians. Armed terrorists affiliated with the Islamic State (ISIS), Hamas, Islamic Jihad (PIJ), and other terror groups have carried out several deadly attacks aimed at Jews and Israelis. Rocket barrages from Hamas-controlled Gaza have accompanied these terrorist attacks inside Israel.

I don’t understand why Israelis don’t have conceal carry.

Put a business suit on a savage and it changes nothing. He’s still a savage.
.

When is the Palestinian “cause” going to be finally relegated to opening for Spinal Tap’s free jazz line up at the amusement park? Hasn’t the world gotten tired of the shenanigans of these miserable people? The Israelis, for such an allegedly brutal and “fascist” regime, sure are remarkably tolerant of these loathsome creatures.

They are waiting on the okay from Jeanine, David St. Hubbin’s girl.

I heard Sex Farm charted at #5 in Jenin.

You’d think the world would reach a certain critical mass in response to these senseless murders, but antisemitism seems to be in vogue in leftist countries.

Maybe Israel should take back Gaza and push the Palis into the sea…..

Or push them back into the Atab countries they descend from and belong in so the Arabs that actually owe these people something will have to start dealing with what they crested instead of punishing Israel with a human weapon.

I wonder what might happen should the regional, Muslim, or Arab coalitions decide they’d rather have a solution than the issue.

The Sri Lankan government finally had it with the Tamil Tigers and put it down with extreme prejudice. In the aftermath, their tourism sector grew and the people finally had a peaceful run (of course until recently when the entire economy collapsed!)

These people murder without a care, and hand out candy.
Meanwhile, we mention the 2A and heads explode.

But, don’t worry, the vile Dhimmi-crats and their European Leftist, dhimmi peers, earnestly tell us that the Arab Muslim, so-called “Palestinians” are all alleged “victims” and legitimate “partners in peace,” their land allegedly having been “stolen” and “colonized” by Jews whose ancestors — inconvenient to Dhimmi-crat/Muslim supremacist narrative — were living in the middle east for millennia before the supremacist, totalitarian and belligerent ideology of “Submission” was founded.

And, note that the despicable and evil Biden Administration released a morally repugnant and sadly predictable statement, expressing sympathies for Palestinian civilians (in addition to pro forma mention of Israeli Jewish civilians) — even though the only Palestinian civilian killed in this incident was the terrorist murderer who committed this evil act.

And, of course, the vile Dhimmi-crats can’t even bring themselves to invoke the word “terrorist,” anymore, in association with terrorism committed by Muslims. That’s how utterly dishonest and evil the Dhimmi-crats have become, in response to the murders of Jews in service of an ideology that aspires to commit genocide against all Jews.

These terrorists have too many apologists and friends on the Left.

There is no excuse, they are not good people!

whenever Israel defended itself against fakestinian terrorists, i would give candy to my co-workers. the conservatives knew why, but the leftards were kept clueless. we loved watching them eat the victory candy