“People don’t feel safe in this town . . . we’re worried we could be San Francisco” 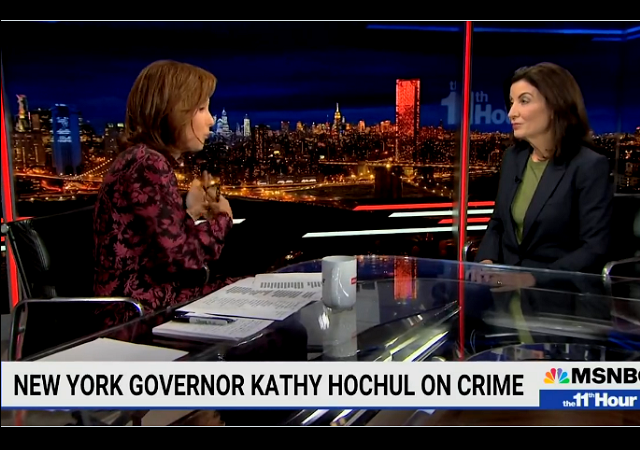 Democrats are becoming increasingly upset about the potential to lose power across a range of federal, state, and local offices on Tuesday, November 8th. They are practically in panic mode, so much so, that a handful of Democrats are already questioning Democrats’ all-in on Dobbs and some unintelligible “threat to Democracy” (I read that as “threat to Democrat power,” and it makes a lot more sense).

Completely ignoring the very real pain Americans are feeling with gas, food, and energy prices surging across the nation and with violent crime skyrocketing in Democrat cities and states, Democrats seemed to float toward midterm elections on a cloud of completely out-of-touch crazy.

Hochul: "[Republicans] are master manipulators. They have this conspiracy going all across America trying to convince people that in Democrat states, they’re not as safe… The safer places are the Democrat states.” pic.twitter.com/D9ae0wVXJm

It appears, though, that even the staunchest media activists for Democrat causes have had enough.  MSNBC’s Stephanie Ruehl blasted Hochul over the skyrocketing crime in New York City. She’s so upset that she lobs a grenade at California’s governor Gavin Newsom in the process.

Even MSNBC is calling out Democrat Kathy Hochul.

"Here's the problem: We don't feel safe…I walk into my pharmacy, and everything is on lockdown because of shoplifters. I'm not going in the subway. People don't feel safe in this town." pic.twitter.com/JUKhxXCk4c

She concludes her tirade by noting that New Yorkers “right now, we aren’t feeling good. We’re worried we could be San Francisco.”

Apparently, Ruehl had been trotting out the who cares about crime, it’s not worse, it’s all a Republican plot line.

.@SRuhle, last month: “While this huge news event was breaking, what was Fox News airing? Crime, crime, crime, crime, inflation, immigration. That's all they do all day, every day. Just going right to the fears of the American people.”

Maybe she’s just upset now because it’s affecting her personally? Maybe something has shifted with such Democrat powerhouses as Barack Obama and Bernie Sanders stating that crime is definitely an issue, as are the economic concerns of everyday Americans? Maybe she just suffered a temporary lapse and accidentally performed an act of journalism?

One thing is certain, though, Ruehl gets that crime is a problem, and she understands that it’s destroying not just New York City but San Francisco, as well. All of the Democrat’s media mouthpieces understand the problems America is facing; they aren’t stupid, they just don’t care.  But then you knew that.

Remove Democrats from power and it suddenly resembles July 4, 1776.

All those people who believe Newsom will be a force in the 2024 elections are dreaming. Even the Dems realize he is the emptiest of empty suits. He’s basically Fetterman pre-stroke. The only job he’s ever had before being governor was mayor of San Francisco.

Fetterman went from mayor to Lt Governor after living his first 49 years without ever earning a paycheck. Both are idiot sons of wealthy families.

Newsom isn’t babbling yet but he is yet another master of word salad press conferences. He never ever answers the questions. He is surrounded by sycophants and has been his entire life. He truly believes he was put on this earth to be POTUS. Even Californians laugh at the prospect of his running in 2024.

Newsom is sitting on a huge war chest that is growing fast but will spend most of it in the primaries only to be one of the first to drop out. The only ones who think he is doing a good job are Hollywood and other privileged, wealthy coastals. And even they are leaving to escape the taxes and violence. So nah, Hair Gel is going nowhere.

Hochul and Hillary* suddenly know that Hochul is a woman.

I guess they found the definition.

Sounds like the name of a law firm in fantasy series like Angel, that turn out to be run by demons.

“…suddenly know that Hochul is a woman.”

I don’t know about that and I even studied biology.

Hochul is a thing, IMO. Just a thing.

Uh uh, the d/prog have gotten the professional karens aka the media riled up with their ineptitude.

It is always all about him. Can’t he just keep his GD mouth shut until after Tuesday. I go to bed at night praying that I wake up the next morning and do not see the headline, “Trump declares for 2024.”

Poor baby. Always wanting the marxist to win. Sorry, Trump will run, win the R nomination by a mile, and then be the next president.

And you poor deranged marxists will just have to suffer while we point and laugh.

Some of you are so far up Trump’s ass it is just ridiculous.

By any reasonable standard, you cannot possibly claim the Rubio is more conservative than DeSantis.

Yet, who is Trump stumping for right now in FL…Rubio the squish. And who is Trump all huffy about because he didn’t ask for his endorsement for governor and might run for the POTUS nomination?

Your first line alone is worty of many upticks.

I voted for Trump twice, because I voted for abilities over personality. But now that he’s resorting to silly little schoolyard games, like name-calling,he’s sounding desperate.

Yeah, the only two choices are supporting Marxists or a narcissistic man-child who acts like a school-yard bully.

I haven’t liked McCain since he cut the deal with Reid regarding Bush judge appointees. But my gawd, Trump’s comments were beyond the pale

Stay off your “GD” keyboard.

Impotent rage is a perfect look on you.

Is that an order! Sir!

That episode is what makes some of us hesitate about DJT in 2024. It’s not his policy choices or combative style of communication. The hesitation is based on DJT making 2024 about himself instead of him running against the very clear failures of the d/prog.

If he had delivered the line in a more humorous way with it built into a joke we would have laughed. DJT can be extremely funny and very effective at using humor to deliver scathing hits on people. It’s a gift he has.

Stephanie Ruehl and her MSNBC comrades don’t feel safe in NY – the one-party state? There is only one solution: VOTE DEM!!!!

The Left’s propaganda organs are at the eating their own stage before most votes have been cast. And well before the last vote gets counted.

But then, December is a long way away. And the hard left wants to get an early start on purging its losers. And on finding a way to get rid of Brandon.

This signals they aren’t as confident their ‘vote fortification’ efforts will be as successful as they were in 2020.

Also, since they evidently believe Democracy may ending after this election because the peasants don’t know what’s best for them, my guess is Antifa will be unleashed soon after Nov 8. And the DOJ and FBI will do nothing about it. Because fighting fascism is the ‘good fight’.

The interviewer is as sincere as the boyfriend who beats the sh*t out of you, and then cradles you in his arms with soothing words of concern.

MSNBC is not playing to readers of LEGAL INSURRECTION.

You are right, of course, but they are squirming uncomfortably in their current space and that is entertaining to watch.

Am I still shadow-banned?
I’m not picking fights.

I’d really like to see Kathy Hochul drag Chuck Schumer down to defeat.

Well, nice to see any of The Positioned Operatives getting actual questions.