“He has been hyperventilating, trying to scare people for months, and New Yorkers are on to it. All the legitimate media organizations have called him out for what he’s doing — fearmongering.” 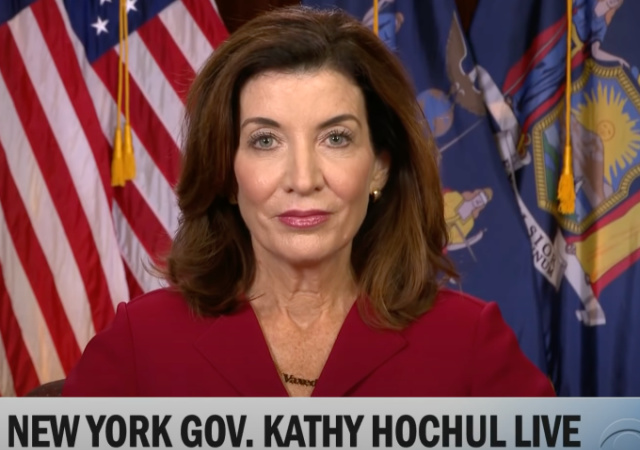 New York Gov. Kathy Hochul is in a close race against Republican candidate Lee Zeldin. You’d think the lady would be more in touch with citizens.

I cannot believe what Hochul said. From The New York Post:

Hochul, 64, took shots at her rival, claiming the Republican congressman was “fearmongering” to scare New Yorkers despite a citywide rise in all major crimes except murder — as he surges in recent polls.

“He has been hyperventilating, trying to scare people for months, and New Yorkers are on to it. All the legitimate media organizations have called him out for what he’s doing — fearmongering,” the incumbent governor said on the Upper West Side after greeting commuters outside a West 72nd Street subway station.

Still, Hochul insisted that “Democratic states are safer than the Republican states” and touted recent measures to address safety on the rails.

“The solution is the state for the first time ever is deploying state officers into the subways. We have cameras on the trains. We’re helping people with severe mental health problems to get them off the trains because they can do harm to themselves or others,” she said.

“So all I’m saying is I understand the fear is out there, but fanning the flames of fear to get people terrified is another story.”

These people blow my mind. It’s like how they think birth control pills are the only way t prevent pregnancy and abortion is a woman’s only option to avoid motherhood.

Murder isn’t the only crime.

The NYPD’s stats show crime has skyrocketed, especially subway crime. Hochul’s comments came after someone stabbed a good Samaritan on a train “for coming to the defense of a woman under attack.”

Since 1997, the earliest data The Post was able to access, there had never been more than five subway murders in a single year until the COVID-19 pandemic struck in 2020 and brought that number up to six for the first time in decades.

The next year, murders shot up to eight. So far in 2022, there have already been seven killings.

“It used to be ‘I know if I don’t go to this neighborhood, I will be safe,’ but today you don’t have that,” said Professor Maria Haberfeld from CUNY’s John Jay College of Criminal, a former lieutenant in the Israel National Police.

It’s called gaslighting and its all teh left has in this cycle.

Would she still be saying this if a bullet came through her window Saturday night and only missed someone by a few feet?

The cynic/realist in me says, probably. She’d claim it was fired by an ultra MAGA hater. Which is what Lenin would say.

She and most of the PTB in The Party are that delusional and fanatical.

I think she would be thrilled to have the chance to say it was a MAGA assassin.

Those eyes give her away. The eyes of a fanatic.

When they are a victim of a crime, whether real or perceived, the perpetrator is arrested and jailed without bail and likely facing a long pre-trial stretch in solitary and in prison after a trial.

When the rest of us are victimized by crime the perpetrator is released immediately, bail isn’t even considered and the criminal then pleads out to some misdemeanor so that he never has to face jail and is returned to the street to offend over and over again.

See how she can perceive crime differently than us ordinary folks?

Tell her to ride the subway without her security detail.

Could be a two-fer.

She’s not worried. She’s still well within the margin of fraud.

She’s not worried. She says, As long as crime happens to somebody else it’s nothing to worrry about.”

Not trying to scare people; trying to inform people what’s going on and how it works. If they’re scared by reality at hand, that’s a different problem. If they’re paralyzed, or driven to flailing by scary reality, that’s a personal problem.

The strategy of getting people “all wee-wee’d up” is hardly new. That Accidentally Anointed Governor H would see that, vs. problem solving, tells us a lot.

The deny is strong with this one.

A typical New York pol, she may be related to Fauxahontas?!? She does have strong cheekbones.

“I understand the fear is out there, but fanning the flames of fear to get people terrified is another story.”

Oh, kind of like how the media handled “covid”?

I would think she is talking like someone who KNOWS that The Party has the vote sufficiently rigged so that there is no way she can lose.

Off topic, but another relatively young man dead in the night. My bet is heart attack, probably had Covid shot?

Hear this over and over and over
The insurance companies are going to broke at this rate, but keep getting those boosters!

The official name for these deaths is Sudden Adult Death Syndrome (SADS). The numbers are staggering.

Thanks — that’s a good one, but, a more appropriate demise for this miserable crone would be for her to drown in a vat of Chardonnay.

a la George, the Duke of Clarence? I’d settle for her getting suicided, just like she’s done to countless others

I had to look up the historical reference — very apt, indeed! Anything that invokes the Bard and English history is worth exploring.

What’s disgusting and contemptible is that the vile Dumb-0-crats have been coddling criminals for decades, a trend that accelerated under narcissist-incompetent, Obama. Every rational person under the Sun understands this is as objective fact.

And, now, add to that criminal-coddling ethos the Dumbs’ installation of myriad criminal-coddling prosecutors, their anti-law enforcement rhetoric and defunding, their open borders lunacy/illegal alien-coddling and this “no cash bail” nonsense, and, the Dumbs possess the unmitigated and brazen gall to deflect and disavow all responsibility, when called out on the transparent and indefensible destructiveness of their polices! It’s outrageous and galling.

“All the legitimate media organizations have called him out”

The new “citizens’ fact-checking” facility on Twitter is so refreshing.
Calling shenanigans left and right on ridiculous Marxist bullshit while the “legitimate media” and their bought and paid-for fact-checking “professionals” are all crickets.

Some parents, children, babies, and others will be planned for the sake of social progress. A wicked solution to a precautionary principle that misses the weather for a handmade tale of climate change.

How can it be “fear mongering” to talk about crime? Shouldn’t Democrats be delighted? Haven’t they been telling us criminals are the exalted and crime victims have no rights?

Very excited for tomorrow night. Hoping for a good outcome in NY.

NYPD which under Giulani and Bloomberg were patrolling in the subways,,are now not coincidentally back on subway platrforms.