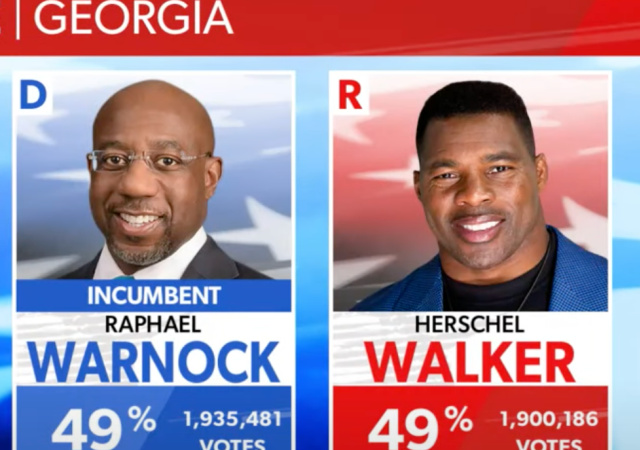 Georgia Democrat incumbent Sen. Raphael Warnock and GOP candidate Herschel Walker did not hit 50%, which means they will have a runoff on December 6.

Libertarian candidate Chase Oliver has 2.1% of the vote. From CNBC:

Neither candidate will garner the 50% of the vote needed to clinch the seat outright under state rules. The two Senate hopefuls will head to a Dec. 6 runoff.

“Right now we have less than 20,000 total votes still out to be counted. That’s not enough to change the race. So this is headed for a runoff,” Raffensperger said Wednesday morning on “The Brian Kilmeade Show.”

The Georgia race, one of the most competitive in the country, could help to determine control of the Senate, along with remaining races in Arizona and Nevada. Republicans need to win two of those contests, against Democratic incumbents, to win a majority in the Senate.

We’ve seen this before:

Runoffs in Georgia elections are relatively common. In 2020, when Warnock was challenging then-incumbent Republican Sen. Kelly Loeffler, another Republican in the race, Doug Collins won 20% of the vote, sending Loeffler and Warnock to a January runoff that Warnock won.

Warnock’s seat in the Senate was won in 2016 by former Sen Johnny Isakson, a Republican who resigned from the Senate in 2019 over health issues. Loeffler was appointed to the seat by Georgia Gov. Brian Kemp until a Special Election could be held in November 2020.

Isakson’s term would have ended in 2023, meaning that whoever wins the seat this year will serve a full six-year term.

This is what happens when you have RINOs running the elections.

Kemp won but not Walker…. simple reason is that a Senator is more powerful and worth the steal. Federal power is stronger than state power. Right now I would wager Kemp and the SOS are making better back room deals with the Dems.

A simpler explanation: Walker is nothing to write home about.

When a political party can drag a literally brain-damaged winner of Lurch cosplay across the election finish line, Walker’s limitations aren’t what’s deciding this.

The Screaming D’s understand that you’re also in it for the part — party affiliated numbers in House and Senate let you set the agenda. With the slimmest of majorities, one can still slam through literally anything they want.

What was the common denominator with Oz and Walker I wonder?

Lots of common denominators. Also many differences. Which one do you have in mind? Is it determinative? More than other things? Did it have to be?

Warnock is a joke, though

Fetterman is not ga ha funny. He’s a sad, pathetic figure. I despise his politics but they way he is being used is as sick as when Sarah Brady used Jim as a prop for her cause.

A simpler explanation – suburbanites are willing to drive to NC or VA for an abortion, but they are not willing to fly to another country and possibly be prosecuted on return. The fear of a national abortion ban is very real and affects federal races.

No, this is not the “simple reason”

Stop and fucking read back your comments….this “everything is stolen” without any proof nonsense is getting super old and is unproductive unless you want to gin up a militia or something.

One can give support without “stealing” my good fellow. Are we going to see Kemp and the SOS campaign for Walker…Hum?? Can there be a quid pro quo for some pro-Georgia legislation in Congress by staying on the sidelines..Hum?

I’ll go further. Why did the CIA chief travel to Brazil and state that contesting the up coming election there would be inappropriate? Why are other countries more efficient in their counting and do not rely on machines?

As for a ‘simple reason”… where did I say this above???? Best check your thyroid level about the knee hyperreflexia… and tone down the cursing.

I said worth the steal….as we have seen with other Democrat elections. To totally exclude fraud in this and 2020 is shallow.

3,CIA chief did that because Biden has the CIA under his complete control. He is abusing that control over the CIA.

4. If you don’t think it is worth stealing a governors race well…..lets just say you really don’t understand politics in this country. The fact that Brian Kemp won discredits the idea that 2022 was in any way stolen. Democrats desperately wanted Stacey Abrams to win because they invested 4 years into her. She was the Democrat version of Donald Trump.

Democrats have the ability to run against reality without being doomed we don’t.

On Fox… I give you the Republican Lt. Gov of Georgia… “Duncan said he doesn’t “respect” Republican Senate candidate Herschel Walker, who will go into a runoff election with Sen. Raphael Warnock, D-Ga, after neither candidate reached 50 percent of the vote. ”

So much for party unity….Need I say more??

Gonna be a tough one on Dec 6. If y’all are in GA please make time to vote in the run off.

Walker polled poorer with Independents than Kemp and it showed up in the results … There was no steal here. There was ticket splitting. Kemp isn’t cutting a deal with anyone or other nonsense …

To the extent there was ballot stuffing, it happened to both given how close the vote totals are between the two candidates. No evidence that anyone went out and threw 50,000 Warnock votes into the system but forget to check Abrams. Ballot stuffing and harvesting happens and it boosts Dem turnout, that is real for sure. But it wasn’t the key issue here.

Do I think the ticket splitters were brain dead? Yeah. But we do ourselves no favor with conspiracy nonsense

The vote totals are about the same in the two races. Kemp won, Walker is in the run-off … now let’s go help Walker win. He needs some lead blockers to help get him over the goal line.

– Keep Trump away from GA , cancel his stupid announcement and tell him to STFU until 12/7

How bout instead Bitch McConnell actually goes out and publicly announces an actual PLAN for exactly what he will do with a Senate majority that requires Walker.

But he won’t do that, because he’d rather LOSE than have Walker win.

Agree. Trump needs to shut up. And go away. Now he is the best thing Dems have going for them in Ga.

Walker needs to win Georgia independents, who have in general shown an aversion to Trump.

The question for Trump should be dead easy. Will whatever he wants to announce next week help or hurt Walker? In my opinion nothing Trump can say will help Walker and anything he has to say will hurt Walker,

So Trump needs to suck it up, take one for the team, and save it for some other time.

Trump is not a team player. Like Obama or Mrs. Clinton, , it’s all about him.

Can you name one altruistic poliitican?

Bob:no, not off hand. But, some are capable of keeping their yaps shut when it benefits them or their cause(s) or allegiance(s).

The dumb shot at DeSantis was beyond stupid. DeSantis is the future long term contender for Prez. Reagan’s 11th commandment is more important than ever.

(I know what I want, but that’s not what I expect. Surprise me Feckless Party — be competent for once.)

They need to get every Georgia Republican who just won to get out in the districts and let the people know why they need Walker to win to finish what got started. Then add some Republican senators popular with folks to do the same. Let folks in Georgia know the rest of us are counting on them. Not a role for Trump.

Is that a joke?

Kemp and Raffenweasel DO NOT WANT Walker to win.

There is a runoff because neither candidate has an IQ over 50.

We’d have a lot more runoffs if it worked like that.

I’ve heard there were many ballots voting for Kemp and Warnock. That makes no sense to me.