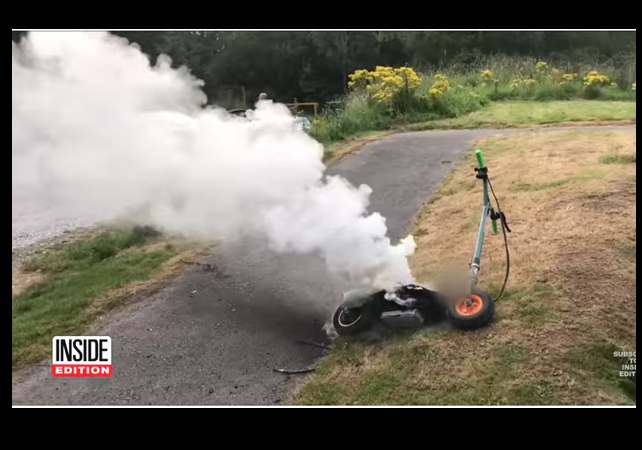 Last month, I reported that multiple EVs in Florida caught fire due to water damage from Hurricane Ian – a hazard that cost emergency services precious time in recovery efforts.

I also laid out the issues with lithium batteries, which lead to fires and related emergency response challenges. Now, New York City fire response authorities are reporting e-bikes and e-scooters have been catching fire regularly, up to four times a week on average.

Sometimes, it does so on the street, but more often, it happens when the owner is recharging the lithium ion battery. A mismatched charger won’t always turn off automatically when the battery’s fully charged, and keeps heating up. Or, the highly flammable electrolyte inside the battery’s cells leaks out of its casing and ignites, setting off a chain reaction.

“These bikes when they fail, they fail like a blowtorch,” said Dan Flynn, the chief fire marshal at the New York Fire Department. “We’ve seen incidents where people have described them as explosive — incidents where they actually have so much power, they’re actually blowing walls down in between rooms and apartments.”

…As of Friday, the FDNY investigated 174 battery fires, putting 2022 on track to double the number of fires that occurred last year (104) and quadruple the number from 2020 (44). So far this year, six people have died in e-bike-related fires and 93 people were injured, up from four deaths and 79 injuries last year.

In early August, a 27-year-old Venezuelan immigrant, identified as Rafael Elias Lopez-Centeno, died after his lithium ion battery caught fire and ripped through the Bronx apartment where he was staying. Carmen Tiburcio, a neighbor, said Lopez’s aunt told her he had tried to escape through the front door, but the bike was in the way. Instead, he took refuge in the bathroom, where he tried to fill up the bathtub with water to protect himself from the flames. But the smoke got to him, she said.

“He didn’t make it,” Tiburcio said. “His lungs were very bad.”

As I began preparing this report, I saw news of firefighters rescuing a desperate woman hanging from a window 20 stories above the street of a Manhattan high-rise after an e-bike battery sparked a massive blaze.

Two dozen residents escaped to the roof of the smoke-filled building, between First Ave. and Sutton Place — and ended up stranded there, as firefighters battled the blaze 17 stories below, on the building’s 20th floor.

The fire broke out when a lithium-ion battery attached to an e-bike exploded by the front door of a 20th-floor apartment, said FDNY Chief Fire Marshall Daniel Flynn.

Two tenants unable to escape by the front door — their only way out of the apartment — instead tried to go out a window.

It might be a good time to offer some recommendations from firefighters. To begin with, they recommend not charging e-bikes and e-scooters near the front door because a fire could prevent a rapid exit from the house or apartment. Other recommendations include:

Talk about being on the hot seat.

“Do not keep charging the device or device battery after it is fully charged.”
Isn’t this what electronics IS FOR? Why does the owner need to monitor it?
The battery “knows” when it is fully charged, why doesn’t it have a circuit that disconnects the charger leads?
Smartphones and computers use the same batteries, and they seem to avoid this condition quite well. How much do you want to bet this problem is really limited to the cheap-ass chargers and batteries used by e-bikes?

This. Laptop and cell phone batteries used to have this problem and then designs were retooled to minimize the risk. to the extent it still happens, it’s the off-brand Chinese knockoffs people buy because a first-party battery is too expensive or unavailable. The problem is entirely cheap Chinese manufacture, and all e-bikes are cheap Chinese manufacture.

Because unfortunately there are a whole lot of sleazy companies that skimp on safety measures.

That and of course we usually get what we pay for. Choose an expensive top of the line product and usually get high end performance and safety. Buy a cheap, low end product at your own risk. It’s cheaper because it cost less to produce using lower quality components with less attention to quality or safety.

In some cases – unlike with mobile phone chargers that are pretty universal – the chargers need to be able to “talk to” the battery being charged.

Most of today’s rechargeable batteries are not just batteries, but contain circuits to regulate what is going on. If the, say, Wang Blang bike battery is connected to the Chong Bong charger, there could be a mismatch and the charger never is told to shut down or throttle back.

Just a note in what is happening in the bicycle arena ( I ride semi competitively , cat 4)

approximately 6-7 years ago, the high bike market went to electronic shifting (both faster shifting and much more precise shifting) The battery charge for the shifting lasts 3k-4k miles. (2-6 months for most competitive cyclists) . To my knowledge, there has been no fires from those batteries (that is not to say that there isnt any, but any fires associated with the electronic shifting batteries is rare. If there fire issues with those batteries, there would be a lot of chatter in the cycling community.

On the other hand, there seems to be a very high number of battery fires with E powered bikes, especially given the relatively low penetration in the cycling community.

When I saw the headline, I thought a new context for hot foot.

I had a lithium ion battery fire in my house perhaps 15 years ago, I was aware of the risk and keep things with lithium on slate, marble, porcelain and ceramic surfaces. That saved my house. That fire was from a 40 watt hour battery releasing all that energy in about a minute.

Readers might be interested in fire extinguisher balls. They have a fuse which causes a small explosion that in turn disperses tri class powder, These are great for at risk for fire areas, They are completely passive fire protection.

Readers might be interested in fire extinguisher balls. They have a fuse which causes a small explosion that in turn disperses tri class powder, These are great for at risk for fire areas, They are completely passive fire protection.

Is that to be used on a lithium fire?you can get it anywhere?

I had a pedago e-bike. I have actually fallen asleep and forgot it was charging in the garage and I have brought it in the house to charge on occasion
I love it but this is scary. I had heard of this, and phones bursting. Eddie’s the cars. Mine always turns off, but…
I was just charging in the. ACL of my house but something happened to my plug ins and I have to have them replaced
That’s where I will charge again. I have remodeling going on and they are suppose to fix the outlets.

Does Homeowners or Renters insurance cover it? I know my policy has a clause about hazardous or combustible materials not being stored in the home. Usually we would think about paint, paint thinner, gasoline, oil and maybe kerosene would need to be stored in a detached shed.

Sooner or later the Insurance companies won’t be willing to absorb the losses and will explicitly identify these sorts of lithium batteries as something to be stored a way from the home. Assuming the general hazardous substance clause doesn’t already apply.

I fly model airplanes and always charge my lithium polymer battery packs in an ammo box under supervision. If you have ever seen the result of a 22.2 volt 450 amp-hour 40C pack shorted out you would take extreme caution with them.

I’m no fireman (though I am a rocket scientist), but the videos clearly illustrate the lithium outgassing a flammable gas (almost certainly pure hydrogen), which then ignites — a double whammy. Sodium ignites the same way when you throw it in a lake(!), and lithium is a brother element.

I’m not a rocket scientist, but I do hold a level 1 certification in high-powered rocketry through the NAR.
Center of gravity must be ahead of the center of pressure, otherwise your rocket does a cartwheel!

Many jurisdictions don’t require residences to have two ways in and out of an apartment or house. If you’ve only got one door and you park that thing in front of it, there could be problems.

Just one more reason why living in an ant-hive apartment in big cities sucks.