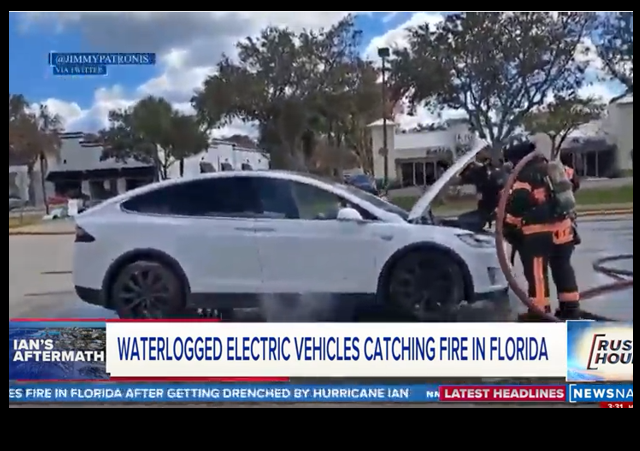 People are beginning to discover a significant, new challenge in post-disaster recovery following a major storm.

“It’s just the allocation of resources that we have to put towards these fires,” North Collier Assistant Fire Chief James Hammond told FOX Business’ Madison Alworth in an appearance on “Varney & Co.” Friday. “And it just ties up resources a lot longer.”

EV batteries that have been waterlogged in the wake of the hurricane are at risk of corrosion, which could lead to unexpected fires, according to Jimmy Patronis, the state’s top financial officer and fire marshal.

The batteries in electric vehicles are lithium-ion (using lithium compounds rather than pure lithium metal). Once a EV-battery fire ignites, it is very hard to extinguish.

Once alight, lithium-ion battery fires are very hard to extinguish. Common fire suppressants don’t work and the fire can burn very fiercely. In some circumstances, the battery can explode.

“If you have a problem with one cell, it’s going to start spreading,” says Magrabi.

This unstoppable fire is called “thermal runaway” which is carefully explained in this video from emergency responder training company evfiresafe.com.

Then, as Florida’s fire fighters discovered, other materials in the car ignite to generate toxic substances.

The batteries were removed from the structure and discarded properly, at a hazardous materials waste site.

So much for “clean, green-energy.”

Lithium batteries, as well as their cousin lithium-ion batteries, are used as a power source for a wide array of electronics and equipment. Fires involving these batteries are becoming more common as more devices contain them. The following video shows examples of fires which have occurred in a range of devices from mobile phones to electric vehicles.

Lithium battery fires associated with electric vehicles expose the responders to numerous hazards and are ideally handled by crews with extensive hazardous materials training. The resources utilized by one EV battery file can be enormous.

Electric vehicle fires can take as much as 10 times the amount of water to extinguish, and fire departments have been playing catch-up as EVs become more popular.

The lithium-ion batteries can be susceptible to “thermal runaway,” which is an uncontrollable self-heating type of fire that takes more water to extinguish.

The emergency response guide for the Tesla Model S states it could take between 3,000 and 8,000 gallons of water to put out a fire.

It is essential people make fully-informed decisions when purchasing equipment with hazardous material components. Unfortunately, mention of the risks of lithium-ion battery fires is rare in the glossy promotion associated with green energy.

Send a bus load of electric vehicle batteries to New York and let Eric Adams dispose of them.

California, Mr. Newsom. That’s the state that wants them.

I am a retired electrical engineer, and have been well aware of Lithium Ion batteries going exothermic. I had an early 40 aAh portable batter pack. I had bought endtables with slate inlays, and I also use ceramic tiles, usually 12″ square for small items and 12 x 24″ for a laptop.

While the battery was charging it failed and caught on fire. It was on the slate end table. It set a box of tissues on fire.

I don’t get their adding more wate to the reaction. This kind of fire should be extinguished with a tri-class A-B-C extingisher.

I had to move out of the house for 6 weeks while it was being decaminated. And the contractor tried to defraud me, so I had to fire him. His guy actually did numerous things to the furnace, claimed it had a leak in the heat exchanger, and tagged it. I rewired it, tested it for carbon monoxide, there was nothing wrong with it. He tried to con me into paying him $15,000.

The lesson here that that you should always get a second opinion if you do not have the skills yourself.

The size of the battery and the lack of large amounts of foam or ABC extinguishers puts them back at water.

The water is not to extinguish but to reduce the temperature and prevent spread to other things and reduce damage to the street subsurface.

It would be faster to get a excavator, dig a hole and bury it.

While Biden was in Florida surveying the damage from Hurricane Ian,

Ian was traveling across America surveying the Damage caused by Joe Biden.

This is the price we pay for a greener, cleaner, more sustainable world.

Thye do contribute, but not anywhere near what volcanoes cause.

They get “good intention” points though so it’s a wash.

Another Climate Denier. No, it doesn’t, because SCIENCE.

Pete Buttigieg will be announcing that the federal government has now decided to skip battery powered vehicles entirely, and just go straight to vehicles powered by nitroglycerin, polonium, and ricin.

Is there anything these miracle EVs can’t do? No wonder your have to pre-order them a year in advance.

I had a conversation about this as the hurricane was approaching, and looked it up. My thought then, and now, was that it’s a matter of the battery enclosure not being adequately sealed.

I thought that submersion in salt water would be the big danger because of corrosion. I wonder how many fires there have been, and whether they’re going to be studied in detail. They should be, needless to say.

Any car that gets immersed in salt water is doomed anyhow. Conventional, electric, doesn’t matter. The salt will corrode and destroy all of the electronics.

Well, yeah. And your conventional car won’t run after that. While your electro wonder-car sometimes catches on fire burning up everything around it.

“it’s a matter of the battery enclosure not being adequately sealed.”
What exactly does that mean inside the guts of a mechanism that routinely goes bang against poles, walls, and other mechanisms? It’s not like cars have a black box. Certainly not one of the size that would be required.

A family member of mine had a solar/battery system installed on his rural farm. He wisely took the precaution of having the batteries installed in a water and fire resistant enclosure some meters away from the house. What he loses in line loss between shed and house is more than made up for in safety.

I have an electric bike in my garage where I charge it
I think that’s not a good idea, the charging there

An EV garaged at a house here in Jacksonville caught fire last night and burned down the entire structure. No saltwater was required.

Do they have any video of a fire in a lithium battery with sufficient capacity to power NYC for a day?

This would be an excellent opportunity for failure analysis on those EVs that caught fire. My guess is that it’s because the battery enclosures weren’t adequately sealed. Now that EVs are poised to become much more common, this issue needs to be addressed right now.

The little reading I’ve done about the general issue tells me that there are different levels of enclosures. Seems as if the EV manufacturers need to adopt a higher level of enclosure. There might be other issues that I don’t know about.

Best to look into all of it post-haste.

Not mentioned is a widely publicized fire on an ocean freighter last February. EV batteries caught fire which could not be put out and it sank the freighter with $400 million worth of high end VW automobiles. Spontaneously possibly burning down my house is a turnoff for me.

Puts me in mind of an adventure I had in the mid-80s while working late in our startup’s shared tech hi-rise. Started smelling acrid smokiness coming out of the vents. Walked the halls, determined what door smelled strongest. Called the FD, then the emergency number on the door, which went straight to a recorder. FD showed up with the night manager who keyed open the door. There was an out of control reaction in a large vat of liquid which turned out to be the wet cell battery for an uninterruptible power supply. Where’s the off button? Silly fireman, why would anybody ever want to shut an uninterruptible power supply off? Fireman eventually shut it off with his fire axe. Happy I wasn’t an employee of that company, come next workday.

Thermal run=away is but one of the several, um, “interesting” pieces of chemistry around batteries; the car-sezed LI ones have a few more problems.

I do enjoy how occasional politically enlightened and enviros — but, I repeat myself — are noting that Lithium Mining is Nasty. Also Bad People Source the electro-stuff we need. And even that Disposal is a Problem.

E-gads, there was even a TED talk.

Next stage, it was all a conspiracy by the same evil folks. Meanwhile the locusts will be off feeding on the next crop of righteousness.

F-500 Encapsulator Agent handles Li-Ion battery fires and neutralises up to 98% of the toxic off-gassing. It should be in standard use. Worth a google.
Produced by Hazard Control Technologies in the USA.