The surge in syringes in New York and the rise in the availability of marijuana is leading to pets being injured and killed. 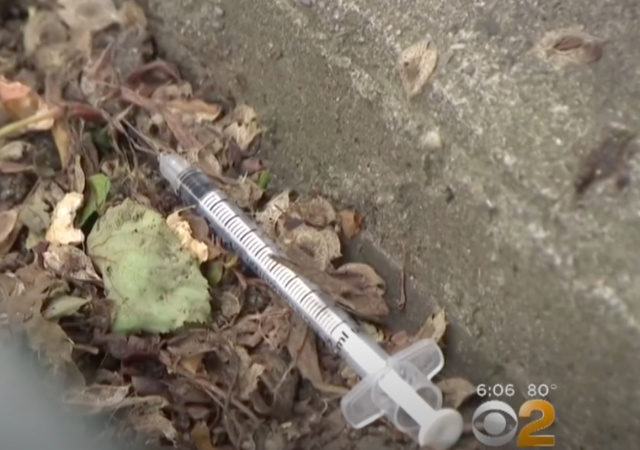 Man’s best friend has been living the high life at Tompkins Square Park, gobbling up pot and cocaine — and even getting jabbed by hypodermic needles — as rampant, unchecked drug use has exploded in the green space and rest of the East Village, horrified owners told The Post.

“I was so mad — all I did was take her to the park,” said Fiorella Garcia, 26, whose pointer mix, Carla, tested positive for cocaine and THC after a morning run in the park’s grassy knoll this summer.

“She’s a puppy. You don’t know what she’s getting into.”

Benton McClintock, 25, said his 5-year-old Cavalier spaniel-bichon mix, Rusti, had been poked on several occasions. Two weeks ago he stepped on a discarded needle near East 9th Street and Avenue A, just months after he was jabbed by a syringe left near the park’s East 7th Street and Avenue A entrance.

…In October 2021, Gov. Hochul signed a law decriminalizing the possession and sale of hypodermic needles, and removing a cap on how many syringes medical sites can provide. An NYPD decree also ordered cops not to cuff addicts shooting up in public.

“Right now, everyone’s [like] ‘let’s hand out needles to addicts,’” cried former dog park manager Garrett Russo, 62. “Where do you think those needles end up?”.

Perhaps gubernatorial hopeful Lee Zeldin can add this to the list of issues to dog Hochul about in the remaining week before the election!

Meanwhile, on the other coast, dogs are ingesting drugs they come across on walks in the Los Angeles area.

To escape the summer heat, Lori Burns recently took her dog Chance for a walk along the coast in Santa Monica.

“It’s a pretty spot, you overlook the water, there’s lots of grass,” she said.

But not long into the walk, Chance suddenly collapsed. Burns took him to a local veterinarian ER where they found oxycodone in his system.

“I was in shock. I thought they called the wrong person, truthfully,” said Burns.

The vet said Chance likely ingested something while on the walk, minutes before he collapsed.

Dr. Steven Centola with Laaser, a veterinarian emergency and rehabilitation hospital in LA, didn’t treat Chance, but says stories like Burns’ happen a lot more often than we might realize.

In fact, there are thousands of reports of pets accidentally consuming marijuana. In the wake of legalization, the number of cases has risen by nearly 60% between 2020 and 2021.

The ASPCA Animal Poison Control Center reports that it handled more than 6,200 cases of potential marijuana toxicity in pets in 2021, an increase of 59.5% over the prior year. Similarly, a 2022 survey of 251 veterinarians in North America, published by the non-profit PLOS organization, found that toxicity cases in pets surged after 2018, with the report noting that the “legalization of cannabis use in Canada and the U.S. is likely an important factor associated with the increased cannabis toxicosis cases.”

In effect, the more prevalent that pot becomes — cannabis is already a $10.8 billion industry in the U.S. — the more likely our pets are going to find it, whether on the street or in our homes.

And marijuana can pose all sorts of problems for dogs. Issues associated with intoxication include vomiting, urinary incontinence, tremors, stupor, hypothermia and low heart rate, according to Dr. Tina Wismer, senior director of the ASPCA Animal Control Center. She adds that, “While fatalities are rare, we can see symptoms that do require veterinary care,” and she encourages those who suspect their pet has eaten something potentially toxic to contact their vet immediately.

Part of the problem, explains Jibran Khokhar, one of the researchers behind the 2022 PLOS survey, is that pets don’t ingest marijuana in the same conscious way as people do. “Humans will grab a joint and they will smoke it at their pace, titrating to the optimal level of effect,” he says. By contrast, your dog may just devour whatever they find, he adds.

Well, certainly some parts of the country have gone to the dogs. Unfortunately, the dogs are paying the price for the new drug-promoting policies.

Used to be that Democrats needed cops to kill your dogs.
Looks like they’ve successfully defunded the middleman.

Well this is timely. Since I moved out of my middle-class neighborhood in San Jose a year and a half ago I have kept up with what’s happening there on the NextDoor app. Recently there have been several postings about dogs poisoned by meth ingestion while out on walks. In the latest account the owner stated her dog didn’t eat anything – exposure was through inhalation. The owner took her dog to a pet ER that is in the neighborhood and they told her they have seen 20 cases of meth poisoning in the past two weeks.

I believe the answer is “What happens when you move the homeless into a neighborhood” for $200 Alex.

If this is happening to dogs out playing in the park, it’s just a matter of time before it happens to a kid too.

There was recently a segment on FOX on this. Dana Perino’s dog racked up $2,500 in the hospital due to marijuana ingestion. The point that had not occurred to me, and is not mentioned above, is that their sense of smell is orders of magnitude better than ours. If they ingest something they like, perhaps the remnants of a joint, their ability to sniff out another one is astonishing.

Not only that, but the potency of the weed that is out there these days is many orders of magnitude greater than that dirt weed you may have heard your friends allegedly messed around with back in the day.

Then there are the ‘edibles’ which are all the rage today. The active ingredient of marijuana is concentrated in these candies, and they can be procured at various levels of potency.

Dangerous stuff when a dog or kid is likely to “… just devour whatever they find.”

The United States can thank Los Angeles mayor – and cretin – Eric Garcetti for this problem. It all started with this moron.

As the reigning top of the proverbial food chain, humans are NOT getting much right these days.

The lack of individual responsibility and the willingness as a society to both impose consequences upon others as well as accept the necessity of those consequences is what the real problem is. This applies to nearly every social issue. No solution that lacks these components can be effective precisely because they lack an enforcement mechanism.

And timely, on the subject of lack of responsibility and consequences (not dogs and drugs), comes the bleating for a pandemic amnesty — plaintive whines of “two wrongs don’t make a right” coming (as they always do) from those who committed the first wrong and wish to get away with it.

This certainly gives one paws.

If a drug overdose is when an addict takes too much of a certain drug, is a dog overdose when Koreans consume too much dog meat?

It’s hurting the puppers? Now this is serious.

Yeah, we don’t mind if people want to self-destruct — just try stopping them — but leave man’s best friend OUT of the deal