The Times of Israel: “The US decision represents an about-face after the Biden administration insisted for months that it would not be opening its own investigation.” 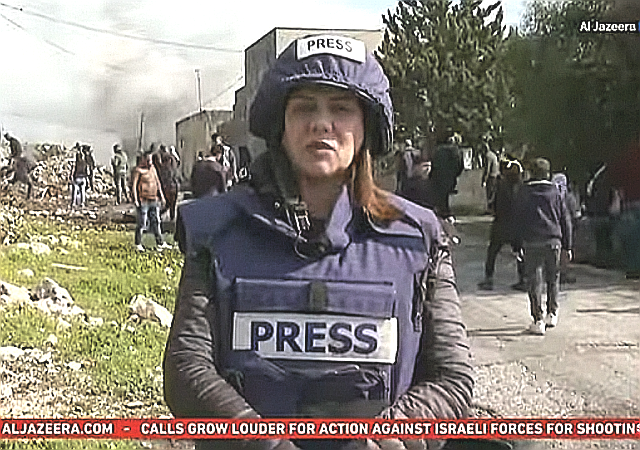 President Joe Biden’s Justice Department and the FBI have launched an investigation that will look into the actions of Israeli security forces in the death of Al Jazeera journalist Shireen Abu Akleh during an ambush by Palestinian gunmen six months ago.

This is probably the first time a U.S. administration has opened a probe against Israeli security forces. The Associated Press noted that “an FBI probe into Israeli actions would be a rare, if not unprecedented, step.”

Israel’s caretaker government rejected the Biden administration’s decision. Defense Minister Benny Gantz called the FBI probe a “grave mistake.” The Israel Defense Forces (IDF) “conducted an independent and professional investigation, which was presented to the Americans,” he wrote on Twitter.

The decision taken by the US Justice Department to conduct an investigation into the tragic passing of Shireen Abu Akleh, is a mistake. The IDF has conducted a professional, independent investigation, which was presented to American officials with whom the details were shared.

The Al Jazeera journalist died of a gunshot wound on May 11 as she reported from the West Bank city of Jenin, a stronghold of terrorist groups like the Al-Aqsa Martyrs Brigades, Hamas, and the Palestinian Islamic Jihad (PIJ).

The Israeli soldiers, who were looking for a terror suspect amid a string of deadly attacks inside Israel, were forced to exchange fire as they were ambushed, most likely by gunmen belonging to the Al-Aqsa Martyrs Brigades, a terrorist outfit backed by the Palestine Liberation Organization (PLO) which runs the government in the West Bank, investigations suggest.

The finding of the official Israeli investigation was inconclusive. Still, the country’s military said in a statement that the Al Jazeera reporter may have been “accidentally hit by IDF gunfire fired toward suspects identified as armed Palestinian gunmen during an exchange of fire.”

The public broadcaster NPR reported the details of the investigation:

The U.S. Department of Justice has launched an investigation into the fatal shooting of Al Jazeera journalist Shireen Abu Akleh, Israel confirmed Monday, condemning the probe as a “grave mistake” and vowing not to cooperate.

Israeli Defense Minister Benny Gantz made the statement on Twitter, saying Israel has made it clear to the U.S. “that we won’t cooperate with any external investigation.”

“We will not allow interference in Israel’s internal affairs,” he added. A Palestinian who covered Israeli operations in the Palestinian territories for years, Abu Akleh was also a U.S. citizen.

A Justice Department spokesman did not immediately respond to a request for comment about Gantz’s statement. It was not immediately clear when the investigation might have begun and what it would entail. But a probe by the U.S. into Israeli actions was a rare step that could shake the strong alliance between the two countries.

@Now14Israel reported that the FBI has opened a probe of IDF soldiers who fought in the battle vs. Islamic Jihad terrorists in which Shireen Abu Akleh, was killed while embedded with the terrorists.
Now we learn the FBI worked with the instigators of Jan 6.
Shocking. https://t.co/pfxmh11sy1

The timing of the FBI probe is highly contentious. The decision was made public just days after the Israeli president tapped former Prime Minister Benjamin Netanyahu to form a new government. The left-wing U.S. Democrats, particularly members of the squad, are angered at the prospect of Israel’s longest-serving prime minister returning to power with a solid right-wing majority.

“But a probe risks straining the strong partnership between the U.S. and Israel at a time when Israel is bracing for the formation of its most right-wing government in history and as progressive Democrats in the U.S. have called for a more skeptical stance toward one of Washington’s closest allies,” AP News noted Tuesday.

US AMB Michael Oren re: FBI investigating Israel over the death of Shireen Abu Aqla

Since 1990, 2,700 reporters have been killed in wars/conflicts. 700 by US forces in the Mideast. No one has been investigated by the FBI, with the exception of Pakistani terrorists and now Israel https://t.co/OaacygxCMR

The investigation marks a drastic shift in the Biden White House’s policy towards Israel. “The US decision represents an about-face after the Biden administration insisted for months that it would not be opening its own investigation, instead relying on probes conducted by the Israeli and Palestinian authorities. It had hitherto accepted the Israeli conclusion,” The Times of Israel noted.

The probe comes after a massive political campaign in Washington. “There has been intense pressure for a US probe from Abu Akleh’s family, as well as Democratic members of Congress, including several relatively moderate lawmakers who are known for their strong support for the US-Israel relationship, such as Sen. Robert Menendez and Sen. Corey Booker,” the Israeli news outlet added.

The demand for a probe against Israel was “backed by dozens of members of Congress,” the British newspaper Guardian confirmed. “News of the inquiry was also welcomed by Senator Chris Van Hollen,” the daily added.

What in the bloody hell is the purpose of the FBI? Serious question.

Israel allegedly shoots a reporter from a Middle East news service. How is this the US’s business?

And, will israel invite the FBI to perform a virtually impossible procreational act?

It’s the business of the US to investigate other countries in order to take the attention off all of criminal activity that needs to be investigated in this country.

It’s an old magician trick. That’s why we are talking about this and not about that.

Was the journalist a US citizen? If not, this is simply none of our business.

But even if she were, this falls into the ‘f*ck around and find out’ category. Go traipsing into a war zone or area where terrorists are known to operate and you’re asking for trouble.

Bibi should tell Biden* to go f*ck himself.

According to Wikipedia, relying in turn on the New York Times (see, https://web.archive.org/web/20220511144848/https://www.nytimes.com/2022/05/11/world/middleeast/shireen-abu-akleh-al-jazeera-dead.html/):
“She spent time in the United States, obtaining U.S. citizenship through members of her mother’s family who lived in New Jersey.”

There ought to be a law preventing foreigners from collecting U.S. citizenship.

Thanks for that, I did a cursory search and didn’t find anything with respect to her citizenship.

I think you’re right; the US immigration policy encouraging chain migration is stupid. It’s illogical on it’s face… just play the ‘six degrees of Kevin Bacon’ game and pretty soon every person on the planet is eligible for US citizenship. Of course, that’s the hidden agenda of the left… flood the country with people raised in collectivist and Marxist countries and they’ll have an electoral lock forever.

According to the NYT – Israel is basically the MAGA of the Middle East. They are all extremists who cause trouble. We should just get over them and move on like with Donald Trump.

I don’t really care if she had dual Palestinian/US citizenship. She embedded herself with Palestinian terrorists who attacked a group of Israeli soldiers. Those soldiers returned fire and she was killed in the exchange of gunfire. As unfortunate as the whole thing may be, what “crime” is there to investigate?

Does Biden’s DO(in)J think Israel is a commonwealth of the U.S. like Puerto Rico?

Would they try to pull this in Puerto Rico?

What am I missing here? What authority does the FBI have to investigate crimes committed on foreign soil, by non-US persons, against non-US persons?

As an American Icon once said “Stupid is as stupid does”. Perhaps the Israelis should investigate the use of war weapons by FBI swat squads against ordinary Americans and Journalists merely to serve a warrant or arrest a non-violent protestor, or infiltrate school board meetings.

Capital Hill is a mountain of money.

The Marines should raise a flag on it.

I was going to concede, but after doing research, I determined that both are mountains of money.

Such an utterly despicable, yet, sadly predictable stunt from the vile and morally bankrupt Dhimmi-crats, serving up some red meat for their Jew-hating, Israel-vilifying base.

And, the utterly transparent nature of the stunt, aside, what is the jurisdictional predicate for such an investigation? There is none.

Totalitarian Islamic governments around the world can oppress and abuse their citizens, Muslims and non-Muslims, alike, with total impunity, but, only Israel is held to an utterly biased and unfair standard. This is bigotry, plain and simple, and, it is evil.

Yeah, to hell with the Dhimmi-crats. They’re stupid, bigoted and evil. That’s what I fairly call a political party that gleefully and unabashedly traffics in transparent Jew-hate and anti-Israel bias that seeks to erase Jews’ historical ties to their ancient homeland, viciously and dishonestly labeling them as alleged “colonial” usurpers.

One or two folks on this website have claimed to take offense at my use of the moniker — totally accurate, in my view — “Dhimmi-crats,” to describe Dhimmi-crats. They can go to hell, as well. The outrage should properly be focused on the vile Dhimmi-crats’ Jew-hating and Israel-vilifying antics.

The DOJ has no jurisdiction. This is the Obama cabal in a snit because Bibi is set to be prime minister again.

If it was an ambush by the palestinians, why would they investigate the Israelis? Wouldn’t they be the ambushees? Try looking at the terrorists that instigated the incident instead.

Even if you hate Mitch – Garfinkle can only do stuff like this for the next 2 to 6 years max. Rather than the the 20 yrs or so that at one time seemed kinda likely.

The media always take the side of the lower IQ group, in this case by far.

I thought punitive “investigations” by the state police were confined to inside the country? Did the Stasi ever try this, or are we advancing the state of the statist art, here?

And what happens next? Asking for ~8 billion friends.

BTW, this isn’t partisan. The relevant histories are J. Edgar Hoover, and COINTELPRO, when talking about FBI as internal enforcers. The political, and cultural affiliations were reversed for those.

it’s like it’s about power for the overlords, keeping the livestock in line, the better to live off them…

Israel has announced the investigation of the American drone strike on August 29, 2021, in Kabul that killed 10 civilians and no one else, where the US did not even punish a single individual and found that no laws were broken.

How about American collusion in Israeli elections?

This is win-win for Democrats: they feed the Jew haters in their base a little and at the same time they know it will lead nowhere, so after they drag Israel through the mud while the Squad and their supporters self-gratify, they can say they didn’t do anything to their political contacts in Israel in private.

Israel needs to arrest the FBI investigators as spies and throw them in Jail just like they did Yonathan Pollard. 40 Years sounds fair.

assuming the israelis allowed fbi personnel to enter the country, what perfect cover for a clandestine operation–foreign nationals, lawmen, with their own weapons and tools and badges and some sort of nebulous “authority”–not in a million years

Israel should not cooperate in any fashion . This pretextual probe is designed to intimidate Israel from defending the lives of its citizens and fighting terror, and to intimidate Netanyahu from speaking out and implementing any strategy or approving any activity against Iran.

700 reporters killed by U.S. forces? Where did they get that stat? Bull-shine.