President Biden: “I apologize we ever pulled out of the agreement.” 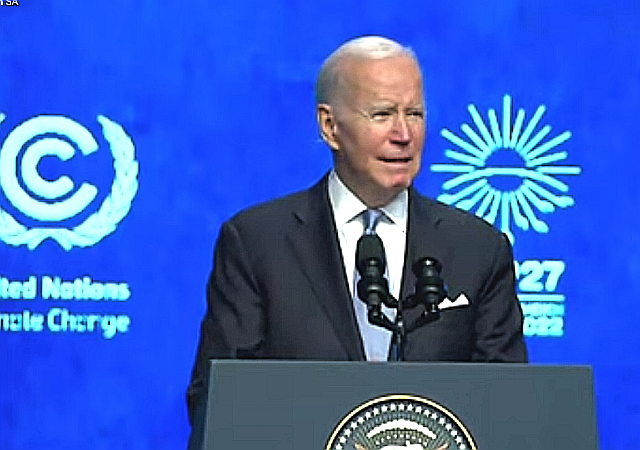 A day after suggesting that he might run for reelection in 2024 despite his declining cognitive abilities, President Joe Biden has declared that climate change threatens the “very life of the planet.”

Speaking at the United Nations’ climate conference (COP27) in Sharm el-Sheikh, Egypt, President Biden apologized before a gathering of world leaders for President Donald Trump’s decision to withdraw from the Paris Agreement and pledged to meet the emissions targets mandated by it.

“The sum total of the actions my administration is taking puts the United States on track to achieve our Paris Agreement goal of reducing emissions by 50 to 52 per cent below 2005 levels by 2030,” President Biden said Friday.

“I apologize we ever pulled out of the agreement,” the leader of the Free World sheepishly told the attendees of the UN summit.

The Paris Agreement, an Obama White House-sponsored global climate pact, suffered a massive blow when President Donald pulled the U.S. out of the framework in 2017. The agreement, which according to the Trump administration would result in the loss of millions of U.S. jobs and trillions of dollars to the economy, went against the grain of his ‘America First’ policy.

President Joe Biden told the COP27 conference Friday the “very life of the planet” is at stake in the climate crisis as he gave an assurance that the United States is on track to slash carbon emissions.

“The climate crisis is about human security, economic security, environmental security, national security and the very life of the planet,” he told an audience at the conference in Egypt.

Biden said the United States is “on track” to achieve its pledge of cutting emissions 50-52 percent below 2005 levels by 2030.

“The United States will meet our emissions targets,” he said, laying out major legislation passed under his presidency, including the largest ever US government investment in clean energy. (…)

“Every nation needs to step up. At this gathering, we must renew and raise our climate ambitions,” he said in a speech that lasted about 22 minutes and was briefly interrupted by unidentified people in the crowd making howling noises.

“It’s a duty and responsibility of global leadership. Countries that are in a position to help should be supporting developing countries so they can make decisive climate decisions — facilitating their energy transitions, building a path to prosperity compatible with our climate imperative.”

The Price of Biden’s Climate Policies

In June 2017, President Trump announced the U.S. withdrawal from the Paris Agreement, citing its adverse effect on the American job market and economic growth. “This agreement is less about the climate and more about other countries gaining a financial advantage over the United States,” he said. “The agreement is a massive redistribution of United States wealth to other countries.”

Following the diktats of the globalist climate accord for the next two decades will cost the U.S. economy “close to $3 trillion in lost GDP and 6.5 million industrial jobs, while households would have $7,000 less income,” the Trump White House estimated in 2017 as it pulled out of the climate framework.

After the 2020 presidential election, Biden declared that the “United States will rejoin the Paris Agreement on day one of my presidency.” He appointed John Kerry, the chief architect of the disastrous Iran nuclear deal, the new White House Climate Tsar, and signed up for the globalist climate agenda — hook, line and sinker.

After President Trump left office, the UN has become even more audacious in its climate demands. In December 2020, UN chief Antonio Guterres called on the “all leaders worldwide to declare a State of Climate Emergency in their countries until carbon neutrality is reached.”

So, 81 million voters want this turd in office and then reaffirmed that choice last Tuesday?

I apologize that Joe Biden is our leader. It’s my fault I should have voted 10 million more times.

With new and improved mail in Dominion voting, you can!!

The President of the United States is a fear monger and a Fool.

A lot of money can be made at the beginning and the end of a country. Just ask The Big Guy.

You might want to jump over to Ace of Spades HE and read how McCarthy and Ryan s plan to diminish MAGA reps in Congress (since there was a Red Wave) and blame it all on Trump. It might clarify some present disputes within LI.

That’s why McCarthy found his head on the chopping block. His duplicity by giving red-meat speeches to appease the Freedom Caucus and then working the rounds to mollify the others (including his friends across the aisle) that he didn’t mean it has worn thin. His time is up. And suddenly Cocaine Turtle, the most hated man in DC, even among R senators, finds his head on the chopping block too. The MAGA team that Trump assembled and is awaiting his return is springing into action. (Good luck DeSantis. )

On that we agree. Regardless of the circumstances it is the job of the r leaders in and out office to deliver results. The results were subpar.

“…turd…”
are you, perhaps, given to understatement?
or are you just being polite?

I guess I should apologize to all other turds in this country for the comparison. No offense intended.

Biden is right! The progressive fascists are using Global Warming to threaten the entire planet.

Arizona, having been criticized for slow counting, has decided to get started counting votes now in preparatiion for the 2024 election.

So we are told. I don’t believe it.

The science is faulty, therefore, so are the conclusions.

If politicians are pushing some kind of “science,” it is likely not science.

Germany and the rest of the EU, Sri Lanka etc. prove it every day. That’s why you never hear about them.

Joke from the Howie Carr show: “Biden and Fetterman will make up the Dem ticket for the 2024 election. It’s a no brainer!!”

It’s actually a possible reality the way “elections” are held now in this country.

It’s a study. By experts. The Science. So shut up.

Still waiting for my 2000 Global Famine.
But Biden will eventually catch up.

The world has been ten years away from catastrophe since the 1960’s. Only The Science protects us.

I belong to the Warm Earth Club. Tha’t’s right, I’m a Warm Earther and I believe the world should be a little warmer because I feel cold.

what slime. Trump was right to dump the detritus.

He’s just pandering to women voters. It’s nothing to do with science or even faulty science. It’s a business arrangement with the global warming scientists.

If he wants the support of women voters, he should promise to kill half of all new born babies. They seem to like that.

Climate change gave birth to life on the planet, and as holy Joe always asserts, those who give birth have an absolute right to abort.

We know the Big Guy was serious because of that squinty-eyed look signifying “Not a joke!” Nobody Fs with a Biden. Too easy.

Pulling energy blanket on us off for no reason.

I believe that after telling the Paris Accord people to go to hell, the US lowered emissions more than any other country in the world

Fact Checking would say this is partly right. Life would become much more difficult and millions would die if the earth became significantly cooler. In fact, I predict thousands will die without sufficient energy for heating this winter.

Warming on the other hand is no problem based on the warmists predicted temperature change which is exaggerated based on their historic track record.

I have an awesome idea! Brandon should submit the Paris Accords to the Senate as a treaty and see how many Dems are eager to ratify it–they only need 67 votes! The dead white males who wrote the constitution actually provided a method for our country to enter into treaties–who knew?

Why they had to install Fraudident Joe*: to implement the WEF’s Great Reset.

Investors, beware. While the cause may be immediate, the risk is forward-looking.

“…and the only way to fight this disaster that will erase all life from the planet is to sent tens of trillions of taxpayer dollars to organizations that will keep us in power and kickback a good chunk of that in campaign contributions and personal payments.”
–All Dems

How did Ukraine allegedly give money to FTX?

“Joe Biden sent our money to Ukraine to fund the FTX Ponzi scheme which in return funded the Democrat Party.
Kick backs, like this!

You have to see this “ceo” to believe it,
I still can’t…

Gonzo, this is your seventh tweet in just the past few hours. If you want to tweet, there’s a place for that.

Wow, are we on a counter here. I just wanted to give credit where credit is due AND I thought them substantive and interesting

Did you LOOK at the 28 y/0 CEO? The failed ceo in a business worth billions , all fake but non the less it’s hilarious but yet so insanely sad that we even got there

Great! The next GOP candidate can apologise to America for Democrats costing each and every person thousands of dollars, and costing millions their jobs. Democrats are bankrupting Americans and destroying their jobs. Vote for a wiser president however and the country can be turned around.