Suspect in Las Vegas Stabbing in the Country Illegally, Has Criminal Record in California

Suspect in Las Vegas Stabbing in the Country Illegally, Has Criminal Record in California 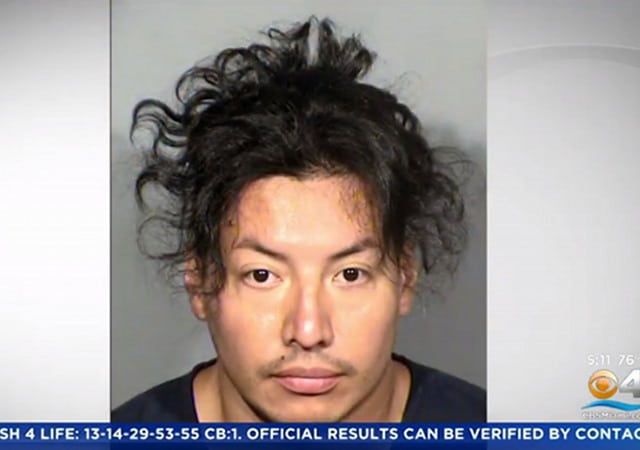 The suspect in a stabbing incident that left two people dead in Las Vegas this week is a Guatemalan national who is in the country illegally.

Yoni Barrios has a criminal record in California, but he was allegedly unkown to ICE because California doesn’t share that information with the agency.

Las Vegas stabbing suspect is in US illegally, has criminal record in California: source

The suspect accused of killing two people and injuring six others during a stabbing rampage on the Las Vegas Strip is in the U.S. illegally, sources told Fox News.

Yoni Barrios, 32, is a Guatemalan national in the U.S. illegally with a criminal record in California, a source with U.S. Immigration and Customs Enforcement said.

The other victims remain hospitalized.

Barrios allegedly began his rampage after a group of showgirls refused to take a picture with him. He approached the group of women and said he was a chef, local news station KTNV reported. He used what authorities described as a “large knife with a long blade,” and began attacking when they rebuffed him.

It probably would have been a good thing if ICE had known about this person.

NEW: Per ICE source, the suspect charged in a mass stabbing on the Las Vegas strip that left 2 dead & 6 others injured is a Guatemalan national in the U.S. illegally, & he has a criminal record in California. I’m told ICE had no record of 32 y/o Yoni Barrios before this. @FoxNews pic.twitter.com/y6VrDQyTOt

Barrios reportedly told police that people were laughing at him prior to the stabbing.

Suspect in Strip stabbings told police people were laughing at him

A man accused of stabbing eight people on the Strip thought he was being ridiculed when he tried to take a photo with women dressed as showgirls, according to his arrest report…

DiGiovanni was among four women posing as showgirls, and Barrios asked to take a photo with them, according to the arrest report released Friday by the Metropolitan Police Department. Witnesses said he was wearing a chef’s long-sleeved white jacket and holding a large knife. He claimed he was selling knives.

One showgirl told police she was uncomfortable with his proposal and backed away, but the man charged at her and stabbed her in the back as she ran from him…

Barrios, who had an address in Los Angeles, told police he arrived in Las Vegas a couple of days earlier to move in with a friend, but the friend told him he could not stay at the house. Barrios then packed his things and took a bus to the Strip.

“Barrios stated that on the bus ride to the strip people were making fun of him and he wasn’t being treated like a human being,” officers wrote in the report.

Does Joe Biden bear any responsibility for this attack, given his border policies?

More importantly, do you think anyone in our media will ask Biden if he feels any responsibility?

A legal vaccine is not a minority report, would mitigate excess criminal behavior.

This morning’s East Bay Times scrubbed all the inconvenient information about this guy in the article reporting the attack.

Back in the sixties I used to listen to Radio Moscow on short wave for amusement. Our media today is a mirror of that dishonest propaganda machine.

So why no info about his criminal record in California?

If he was a white farmer from Sacramento would they have hidden his record as well? Or would he still be in jail?

No doubt Californica did not opt to share that, or any, information with ICE.

Another leftist policy causing the deaths of American citizens by illegals.

Yes, this is the buried lede in all of the coverage. CA virtue signaling led to this as much as Biden did.

Hundreds just like him come across the border each day.

Las Vegas is a sanctuary city, isn’t it? He was just expressing his culture.

None of this is accidental.

Project Veritas has a little-heralded exposé about terrorists on the “extreme” end (tier 1, category 15) of watch lists who have been given multi-year work visas by the federal government and now move around freely among us.

His status [here illegally], criminal record, and his killing 2 and injuring 6 Americans constitute an automatic “get out of jail free” card as far as the US government, the California government, and likely the Nevada government [their governor is a Democrat] is concerned.

He was simply lashing out at systemic racism.

Would love to see somebody – victims’ families or state of Nevada – sue California for not reporting this murderous creep.