“British and US intelligence says the Iranian Revolutionary Guard is on the ground in Crimea, supporting Russian drone attacks on Ukraine.” 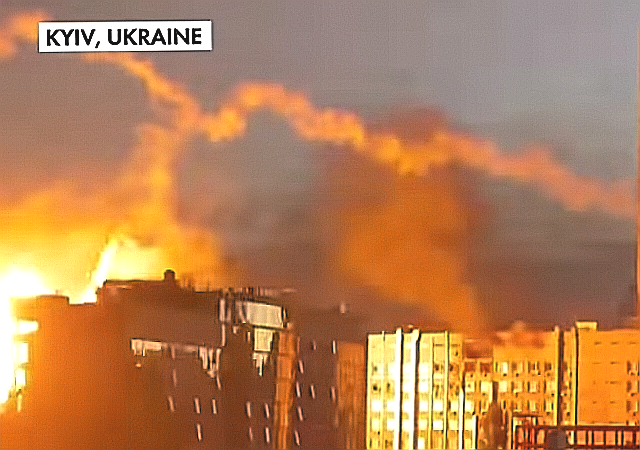 Russia has ordered 2,400 Shahed “kamikaze” drones from Iran, out of which 1,000 have already been delivered. Last week, the Russian military used swarms of Iranian-made drones to destroy infrastructure and hit civilians targets in Ukraine’s capital Kyiv.

These drone swarms are being guided to their targets by Iranian operators embedded with the Russian military, intelligence sources say. “British and US intelligence says the Iranian Revolutionary Guard is on the ground in Crimea, supporting Russian drone attacks on Ukraine,” the UK  TV channel Sky News reported Friday.

“US officials believe Iran may have deployed military personnel to assist the Russians, in part because of their lack of familiarity with the Iranian-made drones,” the broadcaster added.

Video of an #Iran Shahed-36 drone targeting a civilian area in #Ukraine. That is a war crime. pic.twitter.com/D74aOE8KFd

The Times of Israel reported the Ukrainian claims:

Ukrainian strikes in the past week against Russia’s ongoing invasion killed at least 10 Iranians, a Ukrainian official told Hebrew media on Friday.

The official told the Kan public broadcaster that the deaths occurred in two separate strikes in areas where Iranians were.

There were no further details about the circumstances of the strikes.

Iranian trainers from the IRGC, a branch of the military the US lists as a Foreign Terrorist Organization, are assisting Russia in the campaign out of a military base in Crimea, the report said, citing current and former US officials who had been briefed on classified intelligence.

Many of the Iranian drones have been based in Crimea since they were delivered to Russia, the report said.

Russia initially sent its own personnel to Iran to learn how to use the drones, but the weapons were plagued by problems after they arrived in Russian territory. Iran then sent its trainers to Crimea to address the malfunctions, the report said.

Besides hitting civilian targets, the latest wave of Russian drones and missile strikes are aimed at destroying Ukraine’s power infrastructure before the winter sets in. The country’s “energy supply” has been “badly damaged by more than 300 Russian drone and missile attacks over the past 10 days as the weather turns cooler,” British daily The Guardian reported earlier week.

The strikes on power plants are having a devastating impact. According to Reuters on Friday, Russian air strike have destroyed “30-40% of power infrastructure” and “at least half of Ukraine’s thermal generation capacity.”

The Russian strikes continues on Saturday. “Air strikes have hit critical infrastructure in central and western Ukraine, as Russia continues to target the country’s energy grid,” the BBC reported. “Sites to the south and west of Kyiv have been struck and power cuts have been reported across the country.”

On Saturday, the German public broadcaster DW News reported the extent of damage to the country’s energy sector:

“The aggressor continues to terrorize our country. At night, the enemy launched a massive attack: 36 rockets, most of which were shot down… These are vile strikes on critical objects. Typical tactics of terrorists,” Zelenskyy said on social media.

More than a million households in Ukraine were left without electricity following Russian strikes on energy facilities across the country, the deputy head of the Ukrainian presidency said. (…)

State grid operator Ukrenergo said the attacks targeted transmission infrastructure in western Ukraine, but that power supply restrictions were being put in place in ten regions across the entire country, including in the capital, Kyiv.

As the Ukrainian counteroffensive enters its eight week, Kyiv is looking to liberate the southern Kherson region. “Fierce fighting continued in southern and eastern Ukraine as both sides looked to be preparing for a battle over the strategically crucial city of Kherson in the south,” the TV channel France24 reported.

“Kyrylo Tymoshenko, the deputy head of the Ukrainian president’s office, said on Friday that Ukrainian forces had “de-occupied” 88 settlements in the southern region of Kherson,” the broadcaster added.

The Ukrainians pushes ahead, the occupying Russian authorities have ordered civilians to evacuate of the Kherson city, the capital of the contested region. “Moscow-installed authorities urged residents in the southern Kherson region — which the Kremlin claims to have annexed — to leave the main city “immediately” in the face of Kyiv’s advancing counter-offensive,” the French TV network Euronews reported. “A Moscow-installed official in Kherson, Kirill Stremousov, told the Russian news agency Interfax that around 25,000 people had made the crossing.”

Interesting that the Uks. Have shot so many doen.I guess they dont have to worry about thing. I think the Russian will Surrender any day now.

Well Biden just must bring us a new Iran deal to reduce this carnage. /s

So now we are fighting proxy wars with both Russia and Iran, thanks to the basket case and the pitifully weak and incompetent withdrawal from Afghanistan. FJB

If the US is assisting Ukraine, which it is, there isn’t anything wrong with Iran or China assisting Russia.

An electrical grid is a gossamer thing made of spiderwebs and imagination. It takes an enormous amount of work just to keep it semi-functional, and to have some Iranian pseudo-terrorist a hundred miles away plow a hand grenade into your substation doesn’t help.

Russia is fast losing any support in the world by bringing in Iran. Any legitimate grievances have been lost.

“Russia is fast losing any support in the world by bringing in Iran.”

You have it backwards.

American/EU military aggression, economic sanctions and financial warfare have driven most of the world into an unholy alliance against us. Russia, China, India, Turkey, Iran, Saudi Arabia are now leading the rest of the world in a fight against Western neo-colonialism. Twenty years of US/EU hubris is turning us into global pariahs.

You can see the two sides clearly when you consider Globalists vs BRICS.

The Chinese Foreign Ministry on Thursday voiced support for the expansion of BRICS membership after reports about Saudi Arabia showing its intention to join the group that presently comprises Brazil, Russia, India, China and South Africa.

Record short amount of time before someone tried to justify Iran. Yup.

Those are not Ukrainians hitting the Iranians and the Russian generals. US special forces are all over the battlefield.

Americans are doing it.

“there isn’t anything wrong with Iran or China assisting Russia invading neighboring countries and destroying the civilian population”.
Yes there is something wrong with that.

Iran sent completed weapons EFP among others, components for them as well as experts to help produce them to Iraq which killed US Troops. They played a large role in assisting the Shia factions in Iraq. I feel for the Ukrainians on the receiving end of Iranian actions.

My outrage about Iran doing this has long since been exhausted. I find it baffling how the media and US govt is publicly pointing fingers and actively blaming Iran today while during the Iraq era they both shied away for fear of ‘escalating’.

Perhaps had we taken a stronger stance then backed by more vigorous actions the Iranians may have lost the capacity for this or learned restraint.

I wonder if you’d be safe at the north pole. Spherical coordinates go singular there. I know it screwed up the 1995 Microsoft flight simulator.

I agree with the person upthread. There has to be hundreds of foreign military observers spread from north to south and across Ukraine. Who knows what sort of mischief they’re involved in.

Fighting Russia via direct action or proxy is what we’ve been doing for the past 100 years. Bolshevik to present day and across the globe. Why stop now? Because Biden’s brain ceased functioning? Or we can’t afford it? Or because Zelenski is corrupt?

Biden will be gone and we will still be facing a hostile Russia. War or proxy war will never be “affordable”. Graft, corruption and profiteering are camp followers of war. This will never change.

Fifth columnists deny all those things.

Well this is the first time we’ve done it right at Russia’s doorstep. They have an incredibly distinct logistical advantage in this case.

When our terms for peace are for Russia to leave eastern Ukraine in humiliation, give Crimea back, and allow the Ukraine to be part of NATO with US and European offensive and defensive weapons right up on the Russian border… or otherwise War,,, what we’re guaranteeing is an indefinite War where Russia has a huge advantage and lots of people are going to be dead and lots of more stuff is going to be destroyed, but at least Raytheon, Nudelman, etc. will be happy.

Too bad we don’t have president that can strike fear into Putin and the mullahs, not to mention the ChiComs.

Or girl scouts, for that matter. I take that back; young girls are deathly afraid of our pResident.

Destroy all of the weird beards and their drones!
I wonder what Putin would feel like if Ukraine destroyed Russia’s infrastructure and power plants! The Russian population would take out Putin!

“The Russian population would take out Putin!”

No, the Russian population would rally behind Putin to obliterate Ukraine, even if it took a million Russian casualties, which it would not.

Your ignorance of how things are, nor your wish for how things should be, doesn’t influence how things really are.

These are our Irani partners in peace?

Asking for 1,200 protesters arrested in this latest spasm (who can’t ask anything just now.)