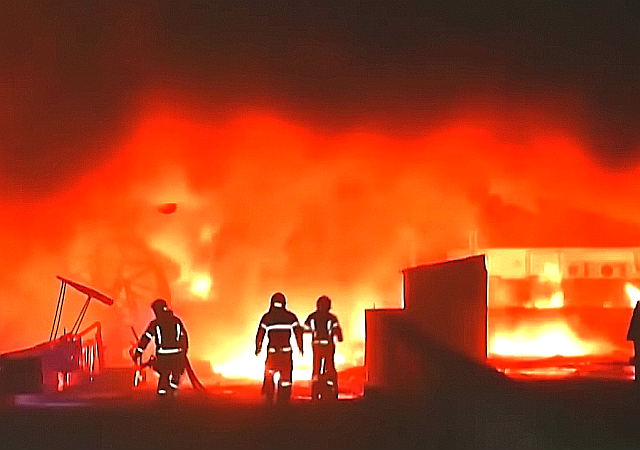 Russia is targeting the Ukrainian capital Kyiv with newly-acquired Iranian suicide drones. “Waves of explosives-laden suicide drones struck Ukraine’s capital Monday, setting buildings ablaze, tearing a hole in one of them and sending people scurrying for cover or trying to shoot them down,’ The Associated Press reported Monday.

The Iranian-made ‘kamikaze’ drones, raining down on Kyiv’s residential areas, have apparently been programmed to hit civilian targets. “Previous Russian airstrikes on Kyiv were mostly with missiles. Analysts believe the slower-moving Shahed drones can be programmed to accurately hit certain targets using GPS unless the system fails,” the AP added.

Iran is shipping these drones in large numbers to Russia. “Despite the denial from Iran, Ukraine’s government estimates that Russia has ordered 2,400 of these drones,” NPR reported Tuesday.

The BBC reported the havoc wreaked by Iranian-made drones:

Russia has hit Ukraine with a wave of attacks, dive-bombing the capital, Kyiv, with what appear to be Iranian-made “kamikaze” drones.

Critical infrastructure was hit in the Kyiv, Dnipro and Sumy regions, with electricity cut in hundreds of towns and villages, the government says.

At least eight people were killed, four in Kyiv and four in Sumy. (…)

In the latest attack, starting at around 06:30 (03:30 GMT), 28 drones targeted the capital but only five hit targets, according to the Mayor, Vitaliy Klitschko.

The city reverberated to the rattle of gunfire as anti-aircraft batteries frantically tried to shoot them down. Video on social media appeared to show one interception.

The Biden administration, currently negotiating the restoration of the Obama-era nuclear deal, has slammed the regime for violating the July 2015 UN Security Council Resolution, which forbids the transfer of arms to and from Iran. “It is our belief that these UAVs that were transferred from Iran to Russia and used by Russia in Ukraine are among the weapons that would remain embargoed under [the UNSC Resolution] 2231,” a U.S. State Department official was quoted saying on Tuesday.

Iran has pledged to supply Russia with additional drones and missiles as the war in Ukraine rages on.

“Iran has promised to provide Russia with surface to surface missiles, in addition to more drones, two senior Iranian officials and two Iranian diplomats told Reuters, a move that is likely to infuriate the United States and other Western powers,” Reuters reported Tuesday.

“A deal was agreed on Oct. 6 when Iran’s First Vice President Mohammad Mokhber, two senior officials from Iran’s powerful Revolutionary Guards and an official from the Supreme National Security Council visited Moscow for talks with Russia about the delivery of the weapons,” the news agency added.

Iran is not only supplying attack drones. Its military has embedded itself in the Russian war effort. “Russian officials trained in Iran in recent weeks as part of an agreement on the transfer of drones between the two countries,” Reuters reported in August, citing U.S. State Department.

Iranian military instructors are stationed near the battlefield to assist Russians in launching drone attacks against Ukrainian targets, the Jerusalem Post reported:

“The Russians took Iranian instructors to the territory of the temporarily occupied Kherson Region and Crimea to launch Shahed-136 kamikaze drones,” the government body alleged, citing Ukrainian underground resistance. “They teach the Russians how to use kamikaze drones, and directly monitor the launch of drones on Ukrainian civilian targets, including strikes on Mykolaiv and Odesa.”

The Ukrainian National Resistance Center said that the Iranian instructors are being housed at the Zaliznyi Port and Hladivtsi in the Kherson region, and in Dzhankoy in Crimea.

Here is a video from CBS Sunday Morning Show that describes the Kamikaze drones that the US is furnishing to Ukraine.

I’m uncertain how I feel about U.S. military support of Ukraine, but unless you are alleging that Ukraine is using these drones to attack civilian Russian targets, this is a false equivalency.

Coming soon to an Israeli city near you!

Just wait for the nuclear drones!

What do you mean? Joe has the thingie…you know, that thing….the Iran deal.

Since Russia is seen to no longer be a super power, it must resort to borrowed means of terrorism. Quite a come down.

It would not be difficult to reduce Iran to stone age living conditions. Empty all majoe water revivors’, destroy power plants, and oil refining-production-extraction.

Edit would really be nice.

What? No harshly worded memo from Tony Blinken?

I suppose he’s afraid to write a memo because then Iran might get really angry and refuse to re-enter a nuclear agreement with the US, where Russia’s cooperation is fundamental to the agreement itself.

“Biden Admin Says Iran Drone Exports ‘Violate’ UN Resolution”
Well, Joe, that’s the sort of thing that happens when a country lets its borders go to hell.
Nothing at all Russia can do about it, shit happens, you understand, right?

Russians, or Ukrainians fighting the dictatorial regime(s) in Kiev? Either way, eight years is a long time for a population to remain under assault by a democratic-military-paramilitary axis.

The dictatorial regime in Moscow has caused all of this

So, Iranian drones, S N Korean chip stocks helping out the invasion of Ukraine. It’s like these folks are aligned. Like on an axis. An evil axis. And axis of evil, even.

How it pains me to consider that perhaps that guy was right, ever, even one time.

/meta
The point is that team sports make you dumb. Often so partisan-dumb, you can’t listen to the other team even when they’re right.

Which does not mean you should trust them, even when they’re accidentally right about something.

Small, Cheap And Not Very Useful

Right click on link (open in new tab) or copy this

Thank you, helps put in perspective what kind of threat these drones represent. They are essentially small, short range, cheap guided missiles (lacking the speed of a regular missile).

I thought Iran was Obama friendly. Peace and money to the mullahs. We’re being two-timed by Iran. /sarc.

The West needs to figure out an offramp from conflict that Ukraine and Russia can live with. The Ukrainian people are bearing the brunt of the hubris and as winter sets in it will get worse.

First, Kiev denied services, which prompted Ukrainians in Crimea to ally with Russians. Then, they targeted people in Donbas in a sustained campaign over eight years, which was only recently joined by Russians through invitation. Now, they are targeting infrastructure following the example set by America/NATO in Serbia, which preceded establishment of the autonomous state of Kosovo. Ironically, the Iranians are likely funded by Obama’s choice to redistributive change, overriding claims against the regime.

Russia pulling their troops out of Ukraine is the only solution,

I’m pretty sure you need a human inside the aircraft in order for it to be a “kamikaze”. Otherwise, it’s just a missile. Piloted … sure, but a missile.

This is called terrorism

So Russian needs the help of Iran to get the job done?