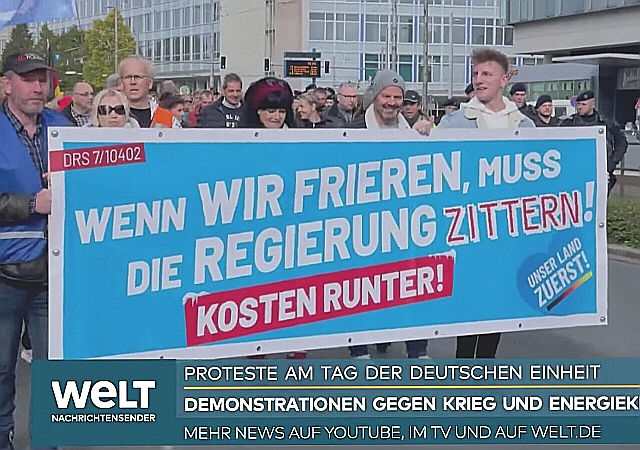 Thousands of people took to the streets in Berlin, Frankfurt, and other large German cites against rising energy prices and the soaring cost of living as the country faces a bitter winter amid a dwindling fuel supply.

The protest organizers “estimated the total turnout at about 24,000 — including around 6,000 in Berlin, 5,000 each in Düsseldorf and Frankfurt, and 4,000 in Stuttgart, with protests also taking place in Hanover and Dresden,” German state-run DW News reported Saturday.

According to the organizers, more than 2,000 people demonstrated in Hanover. The police talk of 1500 participants. In Dresden, several hundred people initially came to the rallies. Demonstrations also took place in Frankfurt, Düsseldorf and Stuttgart. According to the campaign platform “Campact,” a total of 24,000 people took part in the protests.

In Berlin, the police talked of a “quiet and relaxed” situation and estimated that the number of participants peaked at around 2,800. Protesters carried placards such as “We fight for every sector and every job” and “No sale of Hamburg port to China” [a reference to the proposed takeover of the Hamburg port terminal by the Chinese state-owned shipping company COSCO]. The organizers spoke of 6,000 demonstrators.

With electricity becoming unaffordable and businesses closed due to high energy costs, organizers of the Saturday’s demonstration are calling the government to intervene.

“The president of the social and welfare association Volkssolidarität, Karawanskij, [said] that price hike and high energy costs have put many people in a very tough spot. This has led to increased discontent. People need solidarity and social safety net to secure their basic needs. That is the concern of today’s demonstrations,” the German public broadcasting radio Deutschlandfunk reported Saturday.

German Police Gear Up for a Winter of Protest, Unrest

As Russian gas supplies dry up following the disruption of the Baltic Sea pipelines, Germany and other European countries fear long power cuts and blackouts as energy demand rises during the winter months.

As demonstrations grow in strength, German police fear escalation of violence and unrest. The Berlin State police have prepared an “emergency plan” to counter large-scale rioting and protests as Germans face the prospect of a cold and dark winter.

The government Germans are protesting against to do something about costs of energy is the government that put its people in this position.

It’s too bad Merkel is no longer in a position to reap this whirlwind.

Time to bring back the massive bonfires that were so popular in Germany in the 1930’s. They can burn EU regulations and Covid masks for fuel. That should keep all their citizens and migrant guests warm this winter.

Translation: When we freeze, the government must tremble! costs down! Our country first!

Lets project. In December the gathering to sing Christmas carols might have a decidedly different feel to it.

Germany has nuclear plants, they shut them down to assuage Green Energy nutcases. It will take a while to get them back on line, but I would think the Government will try to move fast in view of the coming winter. Or maybe fire up coal-burning power generators.