Die Berliner Zeitung: Berlin “Police want to be prepared for the state of emergency.” 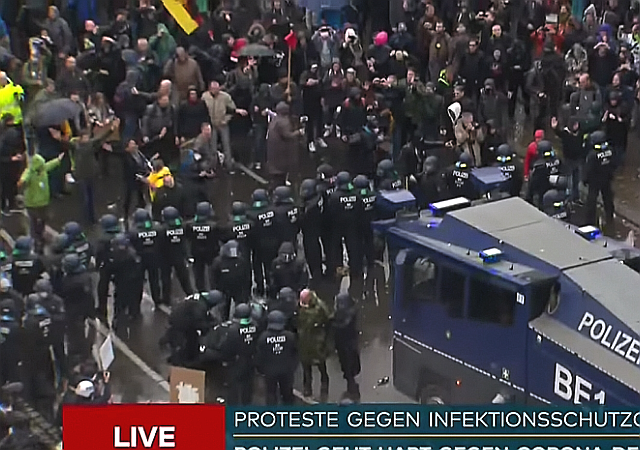 As Germany copes with a massive energy crisis, the police in the state of Berlin are preparing for large-scale looting and rioting in the wake of possible blackouts.

The Berlin “police want to be prepared for the state of emergency,” the newspaper wrote citing a leaked internal document. According to the daily, the authorities were gearing up for “looting, unrest and attacks on the critical infrastructure” if the electricity supply collapses.

The largest-selling German newspaper Bild also reported the contents of the leaked police document, describing it as “confidential.”

For months, experts at the LKA [Berlin State Criminal Investigation Office] and the state police headquarters have been working on a secret paper on “energy crisis.” A spokesperson for the authorities explained: “The Berlin police are focusing on the possibility of certain reactions from taking pace.” The objective is “to be able to act quickly and effectively to protect people in a possible emergency.”

As Die Berliner Zeitung has learned, the [police] concept  — on possible “cut backs in the energy supply” —  is divided in three escalation levels.

“The scenario is already being taken for granted,” [the police document] says. The document assumes, among other things, that there will be demonstrations and rallies expressing [public] displeasure.

Experts predict that this could happen in the coming months: energy sources such as electricity and gas will be rationed. It will only be possible to heat, cook and take a warm shower at certain times. This will also pose a problem for the fire department: people have started using fire to heat their homes – this considerably raises the risk of fires breaking out. (…)

According to the document, the police is expecting a “partial failure” of the power supply. However, if the so-called blackout occurs: looting, unrest and attacks on the critical infrastructure is expected. ATMs will be out of order, trains and trams will be left standing on the routes, mobile phone networks will break down. (…)

The anti-chaos paper is currently being worked out internally by the [law enforcement] agencies. According to the information [acquired by Die Berliner Zeitung], it should be completed by the end of the month at the latest, and submitted to the authorities.

The police plan comes to light almost a week after Russia’s President Vladimir Putin threatened to let Europe “freeze” if the European Union tried to put a cap of soaring Russian gas prices.

“Those who are trying to impose something on us are in no position today to dictate their will,” Putin warned European leaders last Thursday. “They should come to their senses,” he added.

After European countries imposed sanctions on Russian over its invasion of Ukraine, Moscow has been slashing energy supplies to Europe. Earlier this month, Russia severed the gas supply to Europe almost entirely when it closed the Nord Stream pipeline “indefinitely.”

The Russian move sent a shock wave throughout Europe, with Germany passing an nationwide “Energy Saving Decree,” ordering factories, businesses and households to drastically cut back on their consumption of electricity, lighting and heating.

As energy reserves dwindle ahead of a long winter, the German and European governments fear widespread blackouts, public unrest and industrial disruptions in the months to come.

I’m having a hard time generating any sympathy. We need to reverse course on the green energy scam.

President Trump warned them that this would happen and they laughed at him. No sympathy from me at all.

The “elites” who were laughing aren’t the ones who deserve your sympathy. They won’t be experiencing a single cold shower this winter.

Somebody supported those “elites”. F em all. They wanted this, and now they will get it.

As Barry points out the German people elected these “elites” and most Germans in polls had a low opinion of President Trump at the time. Furthermore I do not recall any pushback for this disrespectful act. Quite the contrary there seemed to be general delight throughout the media and Europe over it. They made their bed, they can freeze in it.

Instead the elites now allow Biden to make policy for Europe. After the (stolen) election, Biden bragged about being welcomed back into “the club”, unlike Trump who was definitely not welcome.

As a result, the Europeans will suffer enormously.

I prefer law and order over chaos. What is government problem keeping same priority. It’s almost like governments don’t have the same priorities that I do.

You notice that too?

And, we thought the 2020 COSTCO toilet paper riots were bad.

Violence and Fear are both contagious and will spread like wild fire.

The governments in Europe do not have the same priorities as we do. Hell, the current US government doesn’t either – including the GOP leadership.

I must say that I’m looking forward to celebrating this winter as Germans and other Europeans are freezing to death in the dark.

I suppose I should read the whole comment before upvoting it. It is ghoulish to celebrate anyone “freezing to death in the dark”.

This person has shown themselves time and again to be total scum.

“It is ghoulish…”
Not when they are hell bent on destroying theirselves. They celebrate their rainbow unicorn power generation and now they get to experience the reality. Reality is biting them and the rest of us should enjoy the lesson they teach.

And none of them will notice that the cold (due to lack of energy) kills far more than the hot summers (supposedly due to AGW).

Perhaps they’re getting some tips from the Canadian dictator Justin ‘Castro’ and his advisor, Klaus (You Will Own Nothing and Be Happy) Schwab, on how handle this ‘problem’.

This is our future if the progressive fascists (Dems) remain in power. They don’t care about the welfare of our citizens, only their power.

I have to admit that I am glad that the German Forces of State Security are planning ahead with this. This means I will have time to stock up on soft pretzels and Liebkuchen to munch on while I watch the mayhem in Germany.

The only good to come of this is the warning it brings to a large pile of human garbage that keeps voting for the people and things that don’t make sense.

Yet, they keep voting for them

Cold hungry people do not make good citizens, nor should they.

“For months, experts at the LKA [Berlin State Criminal Investigation Office] and the state police headquarters have been working on a secret paper on “energy crisis.” A spokesperson for the authorities explained: “The Berlin police are focusing on the possibility of certain reactions from taking pace.” The objective is “to be able to act quickly and effectively to oppress protect people in a possible emergency.”

At last — finally, a situation where Germany can play to its strength again.

A selfieish-abortion in “woke” of energy back.. black holes… whores h/t NAACP by Choice.

Recall the imperial arrogance of the despicable Merkel — so typical of the Leftist ruling class, which is incapable of ever admitting fault or mistakes — who, a few months ago stubbornly declared that in hindsight, she wouldn’t have done anything differently with regard to her foolish and naive appeasement of Putin, which she characterized as “diplomacy.”

Well, there’s smart, tough and shrewd diplomacy, and, then there’s stupid, meek and dim-witted diplomacy that enables dictators and their malignant predations and gets innocent people killed. Merkel manifestly engaged in the latter.

After an exhaustive search for f*cks to give, sadly I have come up empty.

And, I can’t seem to find my darn-ing needle.

Looting and rioting is an eco-friendly pastime. It has also been cleared by the WHO for not being COVID-spreading event. So it gets the WEF seal of approval. Gaia will be comforted to know that Germany cares.

Cut their power, starve them and draw up secret papers on dealing with the created situation that makes rioting illegal.
How medevial.

Given that this is a European country with an arrogant people, let me ask this?

How long after the riots begin will the cries of “Juden!” begin, with shops and offices burned, and Jews beaten in the streets?

Ha ha! Too bad, they’ve already boxed themselves in!
Germany was one of the first countries to violate free speech principles by making simply expressing doubt about the Holocaust an actual crime.
So they don’t even have that escape valve anymore.

They voted for it, no sympathy from me
And winter is coming.

The sanctimonious Europeans deserve the misery they’re about to experience. I hope they have a cold, dark winter that will snap the average citizen out of their stupor so that they throw off the Marxists leading them to ruin.

I could not POSSIBLY care less.

Not only have they done it to themselves, they’ve acted arrogant and condescending to the people that warned them EXACTLY this was going to happen.

What little care I have is going to be toasting their misery. Enjoy the fruits of your arrogance, jackasses.

Revenge is best served as a cold dish. It will be very cold this winter.

LOL, never happen. The left is determined to commit suicide, and given their stupiduty I’m willing to just.let.them.go.

The sad thing is we’re not far behind. Exactly where we’re going if we keep forgetting to separate the Church of Global Warming from our State. ESG and Carbon Credits are just the beginning of the sacrifices demanded of the peasants by John Kerry from his Holy Learjet On High

I am currently playing the worlds smallest violin for Germany and Europe.
Empathy for the people and what might be a very hard winter but no sympathy as they elected the clowns over and over who did this to them especially Merkle who should be in prison over what she has done to Germany

Dogs are pretty warm, running over 100 degrees F normally. If you sleep with one, you’re warm too. No need for riots.