Could it be that Zeldin knows the importance of keeping New Yorkers safe? 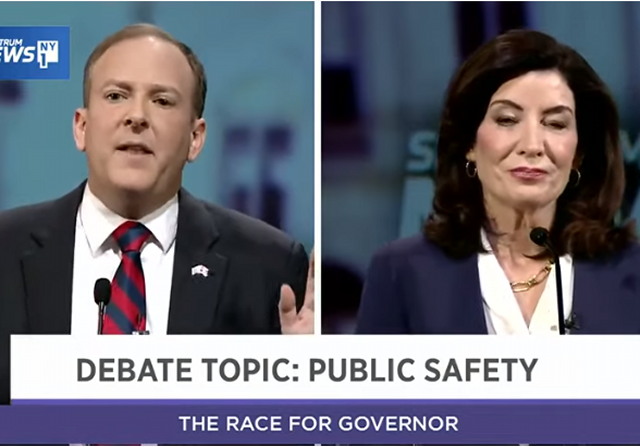 In the race for governor of New York, Republican Lee Zeldin has been hammering Democrat Kathy Hochul on crime and it has been working.

Last night, during their only debate, Zeldin kept up the pressure on this issue and it led to one of those definitive debate moments that people remember.

This is when Hochul lost the debate.

Gov. Kathy Hochul stunningly said she didn’t know why it’s “so important” to lock up criminals when confronted by Republican challenger Lee Zeldin over the state’s controversial bail reform law during their first and only debate Tuesday night.

Zeldin, who’s pledged to declare a crime emergency and suspend cashless bail if elected, brought up the issue midway through the televised face-off.

“My opponent thinks that right now there’s a polio emergency going on but there’s not a crime emergency — different priorities than I’m hearing from people right now,” the outgoing congressman from Long Island said.

“They’re not being represented from this governor — who still, to this moment…hasn’t talked about locking up anyone committing any crimes.”

Hochul responded by saying, “Anyone who commits a crime, under our laws, especially with the changes we made to bail, has consequences.

“I don’t know why that’s so important to you,” the incumbent Democrat added. “All I know is that we could do more.”

.@leezeldin: "She still hasn’t talked about locking up anyone committing any crimes.”

Democrat Kathy Hochul: "I don’t know why that’s so important to you.” pic.twitter.com/Cz6VTMSQzk

This moment is also worth mentioning.

Lee Zeldin: "Why does New York lead the entire nation in population loss? Because their wallets, their safety, their freedom, and the quality of their kids' education are under attack." pic.twitter.com/nLvvcc9qC6

Zeldin got plenty of praise for his debate performance.

Lee Zeldin had the most impressive showing tonight in all of the debates.

I’m exhausted. It’s been hard. But we are going to elect Lee Zeldin and save New York.

If you’re from New York State tune in to the @leezeldin Kathy Hochul gubernatorial debate and see for yourself why you clearly can’t vote democrat this year.
Listen to how out of touch she is and how little she cares about the things that matter to you and your family.

. @LeeZeldin won the NY Gubernatorial debate tonight and will be the next Governor of New York.

The Empire State Restoration will begin on January 1.

If Zeldin doesn’t win this election, it certainly won’t be for lack of trying.

He has worked extremely hard to earn the votes of New Yorkers.

A good many Republicans are going to be victorious this election day unless of course the dems figure out a way to steal ’em!

They already know how. The question is whether the vote will be outside the margin of fraud.

Why is putting criminals in jail so important?

Let one of them kill a family member and you will find out.

Party members and their families are protected from the violent thugs peasants and political opponents must live with.

Why is it so important to Lee Zeldin?

Could it be because he himself was physically attacked at a campaign appearance on July 21?

Could it be because two people were shot right in front of his house in supposedly bucolic Shirley, NY on Oct 9?

Zeldin was excellent but did not hit a home run. . However, this comment by Hochul may have sealed her fate as she showed her allegiance to the defund the police and progressive DAs and their supporters and will make a great campaign ad for Zeldin. Zeldin should also have stressed more his opposition to CRT, gender fluidity and climate change propaganda in schools. I don’;t see the Democratic base of teachers’ and civil service unions and feminists running around enthusiastically to get the vote for Hochul.

Not smart to overstep red in a very back and forth that was once very blue.

I think he played that perfectly. Why give his opponents more sound bytes?

Agreed. Crime is polling as the top issue in NY. Keep on that as much as possible is the smart play. Voters understand crime issues. Lock up criminals, particularly lock up habitual offenders and keep them locked up, that reduces crime.

Hochul has climbed the political ladder by hitching herself to men in power ior being appointed. I believe she won exactly 1 election in her career for a minor position. It shows how unprepared she is for the job and why she tried desperately to not debate. Hassan, Hochul, Fetterman, Hobbs…none want to debate and there is a reason

So she’s like Harris, presumably without the, um, physicality?

Why is it so important to Lee Zeldin?

Could it be because he himself was physically attacked at a campaign appearance on July 21?

Could it be because two people were shot right in front of his house in supposedly bucolic Shirley, NY on Oct 9?

If Hochul loses it is because she is an extraordinarily unlikable person. She lucked her way into being governor.

Unlikable, and, stupid/tone-deaf — promoting criminal-enabling “bail reform” and “defund the police” nonsense, in the midst of a resurgence in violent crime in New York City committed by sociopath, repeat offenders who are emboldened and empowered by the Dumb-o-crats’ perennial and indefensible laxity/indifference with regard to criminal arrests and prosecutions.

“promoting criminal-enabling “bail reform” and “defund the police” nonsense, in the midst of a resurgence in violent crime in New York City”

It’s the old gun-control paradigm. When what you’re doing actually makes the crime problem WORSE, double down and do it harder because obviously you aren’t doing it hard enough now.

Hochul’s idiotic remark perfectly encapsulates the manifest stupidity, imperial arrogance and callousness of contemporary Dumb-o-crats who live in an ivory tower bubble that is far removed from the concerns and interests of their constituents.

If Zeldin manages to pull off a victory it would be quite an accomplishment. One can infer that quality of life has massively deteriorated in New York, for a GOP candidate to win a statewide race.

You use the word ‘infer’, I prefer the work ‘testament’ 😉

I would have liked Zeldin to have answered Hochul, “It is important because I was attacked by a man with a knife at a campaign stop and there was a shooting near my house while my children were at home, so I know what it is like, and the New Yorkers whom I would like to represent do not have your security detail.”

She thinks he wants criminals jailed because they are her voters.

I would have liked a reply along the lines of, “The primary job of the state is to guarantee justice to its people. Justice means the guilty pay consequences for their criminal actions. It also means the people are generally kept safe from the predations of criminals. You’re doing neither with your current policies.”

I haven’t seen a gaffe by a Dem that bad since Dukakis. Wow.

Well, raising their hands to a man when asked if they would give free healthcare to illegal immigrants was certainly a stirring moment.

She’s on record as saying that serial killers deserve a second chance if it’s a first offense.

I’d love a link to that. That’s Biden-level brain damage.

Please remember (it’s most important):
It’s not just how you vote, but who counts the votes

One hopes Zeldin knows “If you win, you get to play again at a higher level.” If he manages to get through the barriers and traps impeding a non-machine, non-D party politician in NYState, he’s only started.

He’ll be tossed into a new game, of a corrupt legislature on the take. A feckless opposition party. A naive resistance expecting both too much and not enough of him. And most important the pervasive apparatus of patronage, graft and grift in all institutions at all levels.

To begin with his AG will be gunning for him from before he’s sworn in. One hopes she’ll charge him with something.

For Dems only J6 ‘criminals’ deserve to be locked up in jail without bail and without trial for years. Suffering mistreatment by abusive prison guards and squalid conditions.

Not to mention GOPe has little to no problem with this.

“[Zeldin] has worked extremely hard to earn the votes of New Yorkers.”

Yes, but New Yorkers work extremely hard to screen out any cognitive dissonance that might persuade them to vote against Democrats. You can’t imagine what an effort it must take to cover your ears, grit your teeth and keep chanting ‘No. No. NO!’ to yourself as the evidence of misgoverning mounts.