The District Court said I didn’t have ‘standing’ to sue. We seek reversal and an injunction: “If the district court were correct that individuals cannot challenge the Policy until they contract COVID-19—triggering a five-day window to obtain relief before oral antiviral treatments become ineffective—then the Department would have free rein to enact racially discriminatory and unconstitutional rules without fear of judicial intervention. That is not the law….” 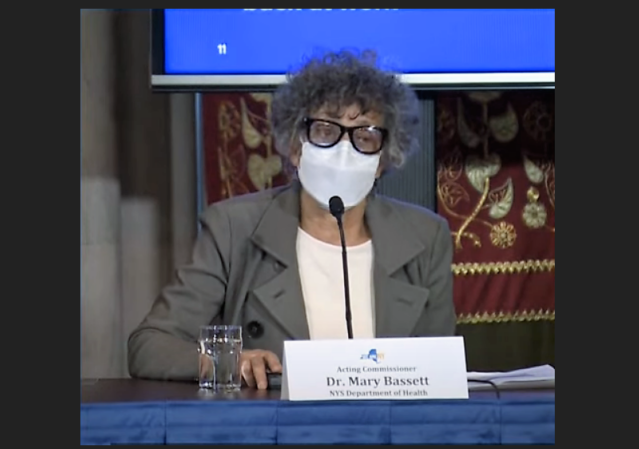 The oral argument in the Second Circuit Court of Appeals in my case against Mary T. Bassett, the New York State Health Commissioner, over racially discriminatory Covid Therapeutic Guidelines, will take place at 10 a.m. Eastern on October 25, 2022.

There should be an audio live stream here. After it’s over, the audio link will be archived here. The case has been consolidated for argument with a related case, Roberts v. Bassett. Our argument may not start right at 10, since there are 4 cases ahead of us on the calendar. The Judges assigned to the panel are José A. Cabranes, Gerard E. Lynch, and Beth Robinson.

I will be listening live online. Want to join me? Be here.

Jeffrey Harris, Esq., of Consovoy McCarthy will be arguing for me. I also want to thank other members of the legal team assembled by America First Legal to represent me, including Gene Hamilton, Esq. (of AFL), Jonathan Mitchell, Esq., Adam Mortara, Esq., and Michael Connolly and James Hassan of Consovoy.

For those of you who don’t remember the case, you can see the full history at Jacobson v. Bassett Covid Therapeutic Litigation.

Our Brief summarized why the District Court was wrong and why I have standing to sue:

We are asking the Appeals Court not only to reverse on the standing issue, but to issue a preliminary injunction because the racial discimination in the guidelines so clearly is unlawful. From our Reply Brief:

“Whites now more likely to die from Covid than Blacks: Why the pandemic shifted.”

One reason for that is that no ethnic group resisted the poison poke more than blacks. (In fact, it is blacks who coined the term “poison poke”.) So it follows that they would be less likely to die. Fewer of them took the poison poke

BTW, at the onset of the vaccines, here in LA, our County Health Dept Ghoul Ferrar was allocating the limited vaccines available based on “equity” which mean whites had to wait until black and non-white latinos received their shots. But blacks were resisting so thousands of those vaccines had to be disposed after expiring on the shelves. That probably saved a lot of black AND white lives. Better to dispose of poison than inject it into people. Just burning money.

Actually, the article concludes just the opposite. As more and more Blacks took the shot, and fewer Whites did, the death rate changed so that more Whites died than Blacks. At least for the Omicron variant.

Here in LA, blacks have consistently resisted taking the poke. It was a big issue early on when vaccines were being redirected from where people were lining up to take the shots to black neighborhoods where they would largely expire and thrown away. Equity entailed denying access to whites and pressuring BIPOCS to get poked. Ferrer would rather throw away vaccines than allocate them to where they were in demand if it distorted the “equity” numbers.

This is a losing case. Plaintiff has suffered no inuury because he was denied no treatment under the policy and appears to have never sought treatment,. Dismissal is the correct outcome.

I meant that as a DOWN vote.
Please fix the voting thumbs, way too close

Reading comprehension not your strong suit I see. Try again. Are you the guy that pretends to be a lawyer but isn’t…. Juris Doctor 🤡

I completely agree that this policy in unconstitutional – period .

that being said, Juris doc is correct, the plaintiff has suffered no injury and the potential injury is too speculative to create standing, at least under Supreme court precidence .

That being said, Same issue with the individual that lacked standing in the student loan forgiveness case.

Both these cases involve blatant unconstitutional actions, but the plaintiffs lack standing.

The alternative is have a doctor file suit, Their injury is far less remote, since the probability of having been denied care is much greater – simply due to a much larger base of potetenionly affected patients.

My last comment is Juris doc and milhouse do not deserve down votes, when they inject the correct legal standard into the discussion

Ask your doctor whether she is an AMA member. I intend to.

Nice mask for her to mumble through.

Still nothing compared to that corrupt hack in Los Angeles (Barbara Ferrer – who is not even a medical doctor!!!!!!) earning nearly a HALF MILLION DOLLARS PER YEAR.

They both – along with that incompetent hack Rochelle Walensky – be wearing one of these:
https://www.halloweencostumes.com/adult-clown-sublimated-face-mask.html

I’m
Pretty sure this is why, I am White, was taken off the Covid monoclonal treatment list when I was sick with the China flu, TWICE. I didn’t have the flu twice, I was on the list twice during the 10 day window .
My Dr said, “it’s probably because you aren’t experiencing immunodeficiency anymore ( cancer survivor)
I said, “ BS, it’s because I am White”

I hope Jeffrey Harris, Esq. kicks butt. I wish I could be here to listen. Break a leg Jeffrey!

In NYC when thevax first came out, NYC was screening applicants via its computer system as to age, race, etc also,

If I recall correctly, lack of “standing” is how almost all of the court cases challenging the 2020 election were thrown out. And the recent case challenging the Biden student loan giveaway. You have a tough job Professor but I wish you success. Unless aggrieved voters, taxpayers, and even states, can get their cases heard on the merits, the Left will exploit this loophole until we are strangled. The Constitution cannot be read this way.

As I noted above, in defense of juris doc above, lack of standing is a major hurdle and unconstitutional acts should have a better vehicle to contest the illegal acts of the executive branch.

fwiw, the states in the 6 state case challenging the student loan forgiveness do have concrete standing contrary to the holding of the district court.

Praying for your success Professor