“If the district court were correct that individuals cannot challenge the Policy until they contract COVID-19—triggering a five-day window to obtain relief before oral antiviral treatments become ineffective—then the Department would have free rein to enact racially discriminatory and unconstitutional rules without fear of judicial intervention. That is not the law….” 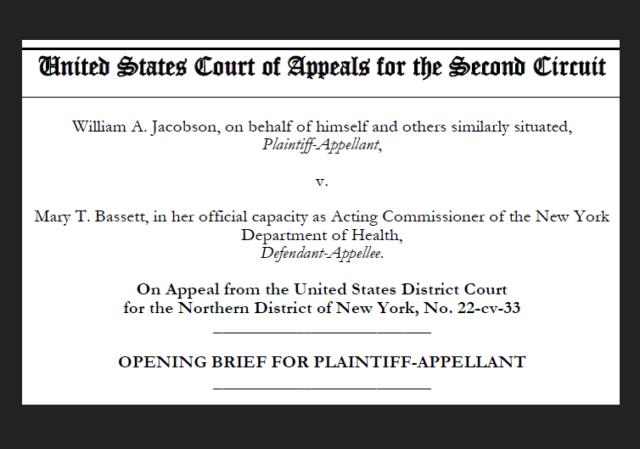 As posted earlier, in January, 2022, I filed a lawsuit challenging the New York State Department of Health’s racially discriminatory Covid-therapeutic guidelines, which provided automatic eligibility for non-whites and Hispanics, while requiring white, non-Hispanics to demonstrate a personal medical risk factor. See these posts for background, including the Complaint and my Motions For a Preliminary Injunction and Class Certification:

The state asserted several defenses, including that I lacked “standing” (because I had not contracted Covid or been denied access), and mootness (because the state was not enforcing the guidelines and had removed them from the DOH website, though the guidelines were not withdrawn). The American Medical Association as part of a coalition filed an Amicus brief supporting the use of race in health care services. You can read all the pleadings and briefing:

The Court dismissed the Complaint, finding I don’t have standing to sue:

Here, the complaint does not allege any action taken by Plaintiff that supports his claim that he would seek oral antiviral treatment in the event that he contracts COVID-19. Instead, the complaint alleges that Plaintiff “is especially at risk for contracting COVID-19 because he teaches at Cornell University, which recently had a severe outbreak despite its extensive COVID protocols.” Dkt. No. 1 at ¶ 14. This is not the type of evidence of intent that the Supreme Court has generally relied on when assessing the standing of a plaintiff challenging an equal protection barrier. In those cases, the plaintiffs met their burden by alleging (or establishing) some affirmative action they had taken that supported their stated intent to participate in the challenged process in the future….

Plaintiff does not argue that he has, in fact, pled such evidence. Rather, Plaintiff argues that the complaint “need only show a ‘substantial risk that the harm will occur'” to meet the injury-in-fact requirement. Dkt. No. 47 at 8 (quoting Driehaus, 573 U.S. at 158). Plaintiff asserts that he met that burden by alleging that he “will almost certainly contract COVID-19 because ‘most people are going to get [COVID-19].'” Id. at 9 (quotation omitted). Plaintiff relies on Baur v. Veneman, 352 F.3d 625 (2d Cir. 2003), in which the Second Circuit held that exposure to “enhanced risk generally qualifies as sufficient injury to confer standing … where the plaintiff alleges exposure to potentially harmful products.” Id. at 634. Even assuming that the enhanced risk rule is applicable to the facts of this case,2 the Court finds that Plaintiff’s theory of future injury is too speculative and attenuated for Article III standing….

Here, Plaintiff’s “theory of future injury is too speculative to satisfy the well-established requirement that threatened injury must be ‘certainly impending.'” Id. In order to trigger Plaintiff’s alleged future harm, the following series of events is required occur: (1) Plaintiff must contract COVID-19; (2) Plaintiff must suffer mild to moderate symptoms (as opposed to being asymptomatic or hospitalized due to severe or critical symptoms), see Dkt. No. 1-1 at 2; (3) Plaintiff’s treating doctor must conclude that use of oral antiviral treatment is clinically appropriate for Plaintiff, see id. at 3; and (4) there must be a shortage in oral antiviral treatment supplies at the time of Plaintiff’s sickness that makes it impossible to offer the treatment to all eligible patients, see Dkt. No. 1-2 at 1. In light of the discretion afforded to doctors in recommending treatment …. and the current lack of any shortage in oral antiviral treatment supplies, the Court concludes that Plaintiff’s theory of future injury is far closer to a “speculative chain of possibilities” than “certainly impending.”4

We believe the district court was wrong as a matter of law, and have appealed, filing our Opening Brief. [link fixed]

Here’s an excerpt from the Introduction on the issue of standing:

… Yet the district court never reached the merits of this critically important claim because it held that Plaintiff—a white, non-Hispanic/Latino individual at risk of contracting COVID-19 who brought suit on behalf of himself and a class of similarly situated individuals—lacked standing. According to the district court, Plaintiff’s injuries were “speculative” because he had not yet contracted COVID-19 or sought to obtain oral antiviral treatments at the time he filed this suit. But Article III doesn’t require Plaintiff to wait to file suit or seek injunctive relief until he actually has COVID-19 and needs the treatments at issue. Indeed, such a standard would mean that the Department’s policy will never be challenged. That is because oral antiviral treatments must be “given as soon as possible and no more than 5 days after symptom onset.” JA23 (emphasis added). No plaintiff could prepare and file a lawsuit, and obtain effective relief, within that extremely narrow window to obtain and benefit from these life-saving treatments.

Article III does not require these absurd results and the district court erred by concluding otherwise. The complaint and the declarations filed in support of Plaintiff’s motion for preliminary injunction show that he has established an injury in fact. It is undisputed that Plaintiff, like all New Yorkers, is highly likely to contract COVID-19. It is also undisputed that Plaintiff, who is white and not Hispanic, is not automatically eligible to receive oral antiviral treatments under the Policy, solely because of his race. And Plaintiff has declared that “[w]hen I inevitably contract COVID-19, I want to immediately access oral antiviral treatments to reduce my risk of serious illness or death.” JA34, ¶7. Plaintiff thus has standing to challenge the Policy because the Department has “erect[ed] a barrier that makes it more difficult for [him] to obtain a benefit than it is for members of [other racial] group[s].” Ne. Fla. Chapter of Ass. Gen. Contractors v. City of Jacksonville, 508 U.S. 656, 666 (1993). This Court should reverse the district court’s dismissal of the complaint, order the entry of a preliminary injunction, and remand for further proceedings.

There are almost an additional 10 pages of legal discussion in the brief further fleshing out the authority on standing demonstrating that the district court erred as a matter of law and that I have standing to sue. We also then address why the appeals court also should grant the preliminary injunction we seek. If you read carefully, you will notice a footnote:

4 Indeed, events since the district court issued its opinion have confirmed this substantial risk. In May 2022, Plaintiff contracted COVID-19 while in Rhode Island. After Plaintiff began experiencing symptoms, he consulted a doctor and received therapeutic treatment in Massachusetts. None of this undermines Plaintiff’s standing, as there remains a substantial risk that he will be infected again, see Juliet Pulliam, et al., Increased Risk of SARS-CoV-2 Reinfection Associated With Emergence of Omicron in South Africa, Science (Mar. 15, 2022), https://bit.ly/3wsD5CV (“[T]he Omicron variant is associated with a marked ability to evade immunity from prior infection.”), and face an impediment to receiving treatment in New York due to the Policy’s racial-allocation scheme.

The case is designated for the expedited calendar, with the state’s response due June 23, 2022.

On the other hand if the 2nd Circuit agrees that you lack standing because contacting Covid; a respiratory virus of several strains which is now endemic to the world is ‘speculative’ …..that would seem to block any actions by either public or private entities to mandate mitigation measures within the Circuit.

Either Covid is highly transmissible or it isn’t. The various mandates designed to slow or mitigate transmission are necessary because of the high transmission rate and the consequent impact on public health . The State can’t argue that transmission is speculative without undermining the basis for their public health policy regime of the last two + years.

Back in February, I went onto the NYC Dept. of Health website and this is what I found:

I was flabbergasted. Where is the science behind this?
I would like to find out what they consider a “personal” trait.  Bad habits such as overeating, not exercising, smoking, drinking, doing drugs, and not following medical guidelines are obviously not considered as contributing factors by these so-called health professionals.  Not mentioned either is that people “of color” are less likely to be vaccinated.

A well crafted legal argument (and rebuttal) is a thing of logical beauty.

Professor Jacobson’s qualified for a beauty pageant; theirs, the world’s ugliest dog competition.

I had Covid in Jan in Texas and could t get monoclonals or any antivirals, good thing I had ivermectin
They had monoclonals, and I met all the criteria but I was white

Thank you for doing this Professor…

Professor J. is waging war on Dumb-o-crat racism and unconstitutional stupidity on all fronts. Kudos to the Professor and his team for their tenacious and righteous efforts!

“…including that I lacked “standing” (because I had not contracted Covid or been denied access),…”

Just as I had predicted months ago, confirming Mr. Bumble’s assertion that “the law is a ass – a idiot.”

I may be missing something, but it appears the “Opening Brief” link is actually to the Court’s order dismissing the Complaint for lack of standing, not for the Professor’s Opening Brief. Can someone provide a link to the brief??

The American Medical Association, which has long been a Marxist Democrat propaganda mail, has finally admitted it, by virtue of its brief in this case!

Mr. Jacobson’s arguments regarding standing are right on point. The district court’s decision is absurd unless viewed from a strictly political perspective.

Excellent brief Professor. I look forward to reading the opposition brief and your reply brief.