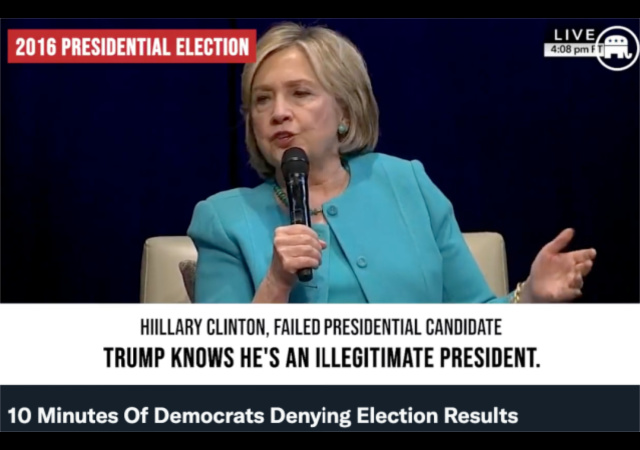 The man behind the curtain (whoever runs the POTUS Twitter account) tweeted that Democrats and the left honor “the will of the people” and they “do not deny it.”

Except when Republicans win.

2000, 2004, and 2016 presidential elections. All mainstream Democrats. Allegations amplified in big media outlets. How could that not have normalized the rhetoric of election denial? https://t.co/WZf4NP7c92

Democrats engaged in a coordinated campaign after the 2016 election to harass electors into changing their votes. https://t.co/FSX74t9X8F https://t.co/CKjdMfa9C6 pic.twitter.com/WZ8uhxQmCq

I’m starting to think democrats don’t like democracy that much. Name change in order?

They have convinced themselves that whatever they want is “democracy” and that anything that goes against Democrats is “a clear and present danger” to the United States, treason by enemies of the state who threaten the very soul of our nation. It’s completely insane, but not unheard of. All petty dictators (and plenty of not so petty ones) ban political opposition as treasonous. It’s what they do.

The DNC’s phrase, “Our Democracy”, essentially means the same thing as when the Mafia said, “Cosa Nostra’, aka “Our Thing’.

Quite clearly, when democrats use the phrase, “our democracy,” the emphasis is on “our,” not “democracy.

In our founding documents there is Zero mentions of a democracy Because the United States is a Constitutional Republican matter how much the Marxist’s try to convince other wise.

My God, with Republicans like these who needs Democrats

He has to go, or get gotten gone.

I cannot bear another minute.

If it wasn’t for double standards, the democrats wouldn’t have any. There were violent riots for the last half of 2020, causing billions in property, but January 6th is the one that’s a threat to nation.

It’s OK when Dems do it.

Because Dems love and are defending our ‘precious democracy’ from the democracy destroying and hate filled forces of fascism. As embodied today by Trump and MAGA supporters.

Only Dems know when elections are, or could be, illegitimate and stolen.

Free speech for Dems, but not for MAGAts.

Liberals have never been able to let go of ‘selected not elected’.

In 2011 How I Met Your Mother literally had hanging chads as a plot point and had the MC engage in a rant about it. It was ludicrously cringe and eye-rolling.

One of the many reasons I have absolutely zero patience with the RINO bullshit about Jan 6th and how questioning elections is ‘dangerous’. Democrats have been doing it for DECADES.

Al Franken is the best example that comes to mind.

For the Trump election, Hillary talked Jill Whatsername of the Green Party, who had no hope of victory short of a Giant Meteor of Death, to order the recounts “covertly on her behalf.” Hillary’s fingerprints were still all over it, but they didn’t glow quite as radioactively.

Are elections to assess the preferences of the polled, or polls to craft so they come out with the right preferences?

It’s the same difference between science n engineering vs. lawyering. Science or engineering you use the rules and observations to reason through to what conclusions they support. Lawyering, you start with how you want it to come out, then go looking for rationales, rules, or assertions you can spin to support that.

Which game are we playing? “I won.” is one game. The Screaming-D’s get all wee-wee’d up when anyone else starts playing the same game they are. (Cough — The Orange Crush — Cough.) All else is distraction.

Since 1980 the only Republican presidential victory that the Democrats have not claimed was tainted and/or stolen in some way was the 1984 presidential election and that required a 49 state landslide.
1980 they claimed there was a deal between Iran and the Reagan campaign where Iran would continue to hold the hostages until after the election ( this is the origin of the term “October Surprise”)
1988 they brought the October Surprise accusation back and accused Bush of a racist attack because of the Willie Horton ads.
2000 not only the hanging chads but they also claimed that roadblocks were set up in predominantly black neighborhoods near the voting booths.
2004 it was complaining about the Diebold voting machines and of course suppression of the black vote.
2016 yeah we all know that story.

In the aftermath of 2000, 2004 and 2016 as well as after 1968 and Reagan’s wins. the Democrats resurrected the far left opposition to the electoral college which they now have turned into a full tilt on the Constitution

Have they delegitimized enough D-party election deniers to flip the next couple R? Seems like it’s getting close.