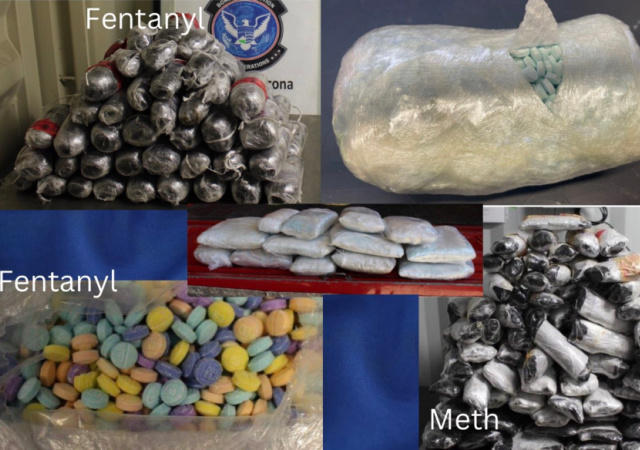 The Democrats’ desperate effort to make the 2022 election about abortion and President Donald Trump is not working.

News reports suggest Americans are more worried about fentanyl and our open borders.

A few weeks ago, my colleague Mary Chastain noted a Texas sheriff viewed the deadly opioid fentanyl as a “weapon of mass destruction.”

The attorneys general said they’re troubled by the numbers showing that 75,000 U.S. adults in the country were killed by fentanyl poisoning between February 2021 and February 2022. They said their unorthodox request is a proactive step at preventing unimaginable consequences.

The bipartisan group said that the fentanyl crisis has evolved from prescription drugs to heroin to synthetic opioids, including fentanyl. New Hampshire Attorney General John Formella said the drug could be the No. 1 cause of death in all states, including New Hampshire, by the end of the year.

“Fentanyl is particularly lethal,” Formella said. “It can take only 2 milligrams to kill an adult. It is packaged in certain ways now that it can be particularly attractive to kids. It can be laced into other drugs.”

Officials said there has been a big influx of fentanyl in Manchester and Nashua in the past year.

Cameron has joined a coalition of 18 attorneys general calling on President Biden to respond to the record increase in overdose deaths related to fentanyl.

In the letter addressed to the president last week, they cite the CDC’s overdose data stating that in the 12-month period ending in February of this year, more than 75,000 Americans died from overdose of synthetic opioids, mainly fentanyl.

According to the 2021 Kentucky overdose fatality report, fentanyl was identified in more than 1,600 overdose deaths of Kentuckians. That’s nearly 73% of all overdose deaths for the year.

“Fentanyl is certainly a threat. It’s a threat not just to Kentucky, but all Americans. It’s the leading cause of death for individuals ages 18-35, which is extremely scary,” said Pat Fogarty, the COO of Addiction Recovery Care.

Fentanyl is a clandestine killer, and Texans are falling victim to the Mexican cartels that are producing it,” said Governor Abbott. “Cartels are terrorists, and it’s time we treated them that way. In fact, more Americans died from fentanyl poisoning in the past year than all terrorist attacks across the globe in the past 100 years. In order to save our country, particularly our next generation, we must do more to get fentanyl off our streets.

Governor Abbott also directed DPS and law enforcement agencies to identify Texas gangs that support Mexican drug cartels and seize their assets in order to disrupt cartel networks operating in Texas communities, as thousands of Texans have been poisoned unwittingly by counterfeit pills laced with the deadly synthetic opioid.

Such a thing would be an extremely dangerous and stupid thing to do.

A true WMD already has an established criteria.

Make an exception here ( regardless of how well meaning) and that same criteria will be weaponized and used against us.

For once I agree with you. This is a stupid, stupid thing to do.
Fentanyl is already super illegal.
But now we need to make it extra secret double probation super illegal.
That’ll fix things!
But how, exactly?
Especially when brain-dead DAs turn the dealers back onto the street no-bail?
Prohibition laws NEVER work. Never, ever. Black markets always win.
Stop targeting objects and substances. Start targeting PEOPLE for VICTIMFUL crimes.
Got a dead addict? That’s all you need. Convict and then execute his dealer.
Hanging redder labels on the pill bags is nothing but REPUBLICAN virtue signaling.
My own critter, “most conservative member of the House,” is pushing this.
It’s one of the almost invisibly few issues on which I differ with him.

The semantic games have long been played, the em-pathetic appeals made, and political congruence (“=”) is an established principle under religious (“ethical”) sanction.

Any drug dealer who is caught distributing fentanyl should be rquired to swallow two tablespoons of the stuff.

Fentanyl is the one narcotic I am not allergic to.

I’ve had numerous surgeries, and nearly after each one, the narcotic they use in post surgery gives me hives and SOB. I’m not talking rash here, but hives popping up like an inch high, like in a monster movie special effects Very weird.

I am relatively unsympathetic about fentanyl. Is fentanyl being slipped into unsuspecting peoples’ drinks (a la Roofies)? Or is it people taking recreational drugs who screw up?

To me, whether it is hot shots of heroin or overdoses of fentanyl, let the druggies kill themselves. I’m sorry for the ones who love them, but it is their choice.

Many of the OD are unsuspecting folks who thought they bought something else. That said, anyone ingesting a drug that wasn’t an RX filled at their pharmacy is voluntarily rolling the dice. The sheer amounts of this crap pouring in make it a near certainty that eventually they will be exposed to fentanyl laced products.

It killed my son three years ago.
Yes, he was a heroin addict who thought he “could manage” his habit.
But no, he did not knowingly take the hit that killed him.

Fetynal as a prescribed, physician-monitored MEDICINE is fine; as a street drug, it is truly a WMD.

Some people are self destructive and cannot be saved. I had a sister who was like that. She dropped 3 kids, each a different man. She seriously damaged 2 of her children, something which I found totally unacceptable. We were helpless, there was no way to save 2 of her children, the youngest was saved by getting her to allow him to be adopted.

I have thought for a long time that we should offer the option of treatment or confinement with all the drugs they want, it would be evolution in action. Also, maybe we should start using fentanyl for capital cases? It sounds like it would be very effective.

My attitude too. Until it was my family member.

The AGs aren’t actually looking at whether or not a drug constitutes a weapon. They’re looking at the legal tools that would become available to them in the fight against it.

This is absolutely the wrong reason to create a whole new category of WMDs! In particular, a category that would be forever expanding as AGs and DAs used supposed emergencies to increase their power.

By all means, let’s have this debate. Maybe we do want to recognize some new category of weapon or attack, to help us understand the scourge of drugs like fentanyl.

Let’s be sure to tell the politicians to stay the hell out of the debate, too. This is too serious a subject to allow them to dictate what happens.

WMD is the political equivalent of “overprescribing.” Same as “I’m gonna punch you inna nose” is now a “terroristic threat” instead of simple assault. Same as you now lose constitutional rights (gun ownership) over misdemeanors (domestic altercations).

Agreed. Perhaps we just need to stop looking at this cross border transport as LE issue and instead approach it as a national security issue. Then proactively address the cartels directly, hopefully with the cooperation of the Mexican Govt. Hit their assets where we can find them and go after their leadership.

It course that’s likely to further destabilize Mexico and that brings other questions. Is all the fallout worth it? We could easily make it worse by failing to be ruthless enough to successfully accomplish the mission and by failing to address the follow on problems we will create.

And what will this do to fentanyl as a legitimate drug in medical practice? one more treatment option doctors will be afraid to use when warranted?

The drug cartels have declared war on us killing our children. We need to declare war on them. Tell Mexico authorities to get on board or get out of the way, then drone the hell out of cartel redoubts as a starter.

As others have said, this is a terrible idea.
I use fentanyl every day in anesthesia.
It is already illegal to sell it on the black market.
Making it super duper illegal will likely only affect law abiding doctors, not the cartels.