‘Truly a Poison’: Texas Sheriff Describes Fentanyl as a ‘Weapon of Mass Destruction’

‘Truly a Poison’: Texas Sheriff Describes Fentanyl as a ‘Weapon of Mass Destruction’

“In my career, I thought I would never see anything worse than methamphetamines, which has been horrible scourge on our population, but this is taking it to a new level. It [is] truly a poison.” 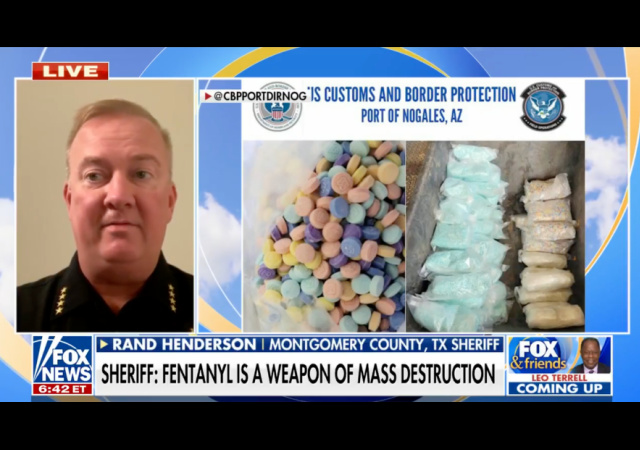 Sheriff Rand Henderson of Montgomery County, TX, told Fox & Friends that fentanyl is nothing like he has ever seen in his career.

Officials have shown rainbow-colored fentanyl, making it look like candy, regularly coming across our border and cartels using the regular drug routes.

Two milligrams of fentanyl is deadly.

“It’s a poison that’s being introduced to our country. I mean, the illicit manufacture of this stuff has just gotten crazy with the potency of it. The deception by the drug dealers to mix it in to the pressed pills, trying to sell it as a legal drug that’s a prescription medication.

“It only takes 2 milligrams of this stuff to kill you. We’re finding twice, sometimes three time the amount of fentanyl in a pill that is not supposed to contain any fentanyl.

“Believe it or not, drug dealers will lie to you. These manufacturers are not professionals. There is no quality control standard. And it is truly a weapon of mass destruction that’s killing our population.”

“In my career, I thought I would never see anything worse than methamphetamines, which has been horrible scourge on our population, but this is taking it to a new level. It [is] truly a poison.

“Which is what our Governor Greg Abbott is looking to do, is to label this not only as a narcotic but as a poison. So manufacturing, delivery with intent or resulting in injury or death is already a felony crime in Texas.

“So we are hoping to add it as a poison and move it up a step by our Texas Legislature.”

The DEA classified fentanyl “as the deadliest drug threat facing our country.” The rainbow fentanyl can make it more enticing to children:

Brightly-colored fentanyl is being seized in multiple forms, including pills, powder, and blocks that resembles sidewalk chalk. Despite claims that certain colors may be more potent than others, there is no indication through DEA’s laboratory testing that this is the case. Every color, shape, and size of fentanyl should be considered extremely dangerous.

Fentanyl remains the deadliest drug threat facing this country. According to the CDC, 107,622 Americans died of drug overdoses in 2021, with 66 percent of those deaths related to synthetic opioids like fentanyl. Drug poisonings are the leading killer of Americans between the ages of 18 and 45. Fentanyl available in the United States is primarily supplied by two criminal drug networks, the Sinaloa Cartel and the Jalisco New Generation Cartel (CJNG).

My son was fighting a losing battle with heroin. The last hit he bought was laced with Fentanyl, and it killed him at 27 in September 2019.

Yes, he made very poor choices. However, dealers should be executed with extreme prejudice. I would gladly act as the means of delivery.

Our son died from Fentanyl OD in April of this year. I’m right there with you. Fortunately for his dealers, I am way out of state from where he died.

The number one cause of death in the US for people 13 – 45 is a Fentanyl overdose.

How horrible for both of you, yes, these dealers should be put to death.
Accept my most sincere condolences

Please accept my prayers and sympathy. It must have been terrible to receive the news. My son died at my home; I found him. As awful as that was, learning of his death somewhere else would have been worse for me. God bless and comfort you and your family.

Scott Adams lost a stepson from a fentanyl overdose. Check out his blog about what he would do to those who traffic in the drug. He would declare war on them and wipe them out, Seriously. Now.

I would cut the line in front of him.

Anyone carrying/selling/transporting fentanyl should be forced to eat a handful of the pills.

It is my understanding, and DEA and CBP support this, that the bulk of fentanyl is manufactured in China.

It would seem to be an act of war in my honest opinion.

But allowed through our border

It always upsets me when President Trump talks about how he asked XI if they had a drug problem in China and XI always says “no” we have quick trials and then they are executed.
Gets big laughs.

However XI just encouraging his countrymen to supply our addicts.

“However XI just encouraging his countrymen to supply our addicts.”

Just shows they are capitalists at heart.

Since this isn’t the usual left-wing existential crisis it means nothing to the regime.

Our nation is under attack, China manufactures ingredients, uses Mexican cartels to deliver it here. Over 71,000 deaths in 2021, far more effective than a 9/11 attack. Add in Tik Tok “challenges”, BLM/Antifa, etc., being funded by our enemies they are destroying our social fabric. And they are being helped along by the useful idiots of the left in the Brandon admin, academia, etc. whose self loathing is such that they want the USA destroyed. And we have just a few who see things as they are and are willing to stand up to it. The global left united to bring down Trump because he was in a position to stop them. Everyone talks about “polarization” and how bad it is now. Well yeah. BITD, Democrats and Republicans generally stood for the same thing, call it peace and prosperity, but differed on the means. Now the Democrats are actively participating in the destruction of the USA from within. And they paint republicans as enemies of the state for daring to oppose this destruction.

It’s depressing that I can no longer assume that deliberate depopulation is not a covert goal of our government in power.

Yet, they are replacing us with illegals, easier to control I guess

I am biased, but IMO anyone who now supports this administration should think about having a family member die of a fentanyl overdose and get a little perspective on what is important. It is not spending $400 billion on the so-called “man-made climate change” scam. As an aside, without a massive expansion of nuclear, we do not now have and never will have the solar and windmill infrastructure to support a massive shift in vehicles, stoves, heating, etc to electric – which will make no material difference anyway.

Personally, I can’t get too uptight about it. If some junkies and dopeheads want to kill themselves with Fentanyl, Heroin, Cocaine, whatever, it’s fine with me. Fewer dopeheads mean safer roads, less crime and more hospital beds for people who are really sick.

What keeps me awake at night is the potential of their ease of use in a mass homicide, say at a gathering where they were added into a meal or desert – if I can imagine it, you know someone evil has already considered it.

Its true: After George Floyd overdosed on Fentanyl, Burn Loot Murder mobs destroyed over 100,000 small businesses in Democrat run cities all over the country.

It is completely meaningless that fentanyl is 100 times more powerful than morphine.
If those pills contained, let’s pretend 100 mg of morphine, everyone who took one of those pills would immediately fall over dead.
Just like they would drop dead if it contained 1 mg of fentanyl.
If everyone who took one dropped dead an hour later, you can bet no one would buy those pills.
Just how much fentanyl is in one of those pills?
It must be an amount of fentanyl equivalent to 5 mg of hydrocodone because they are marked similar to hydrocodone pills.
Truth is that is manufactured in factors in China and ship to Mexico where is packaged pressed into various forms and smuggled into the US.
The government and main stream media don’t care because fentanyl overdose is largely a phenomenon of white youth.
Keeping the border open is enabling us this deliberate act of war by the Chinese.