Another partisan CNN employee on his way out soon? 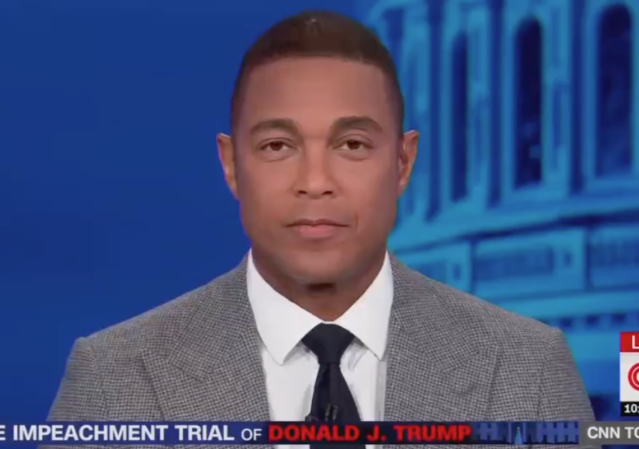 Poppy Harlow, who currently hosts 9-11 AM, and current chief White House correspondent Kaitlin Collins will join Lemon on the new show, which does not have a name yet.

Licht said: “There is no stronger combination of talent than Don, Poppy and Kaitlan to deliver on our promise of a game-changing morning news program. They are each uniquely intelligent, reliable and compelling; together they have a rare and palpable chemistry. Combined with CNN’s resources and global newsgathering capabilities, we will offer a smart, bold and refreshing way to start the day.”

The press release didn’t mention what show would replace Lemon at night.

John Berman and Brianna Keilar, the hosts of the current morning show New Day, will have different roles once the new show debuts later this year.

Lemon made it sound like he’s happy to move to the morning: “The last eight years have been an incredible ride. I’ve had the opportunity to work with one of the best show teams in the business, but it’s time to shake things up. I am so appreciative of the Don Lemon Tonight team, my wonderful, loyal viewers and everyone who has believed in me. I was honestly floored when Chris Licht asked me to do this and I’m honored by his belief in me. It’s going to be a thrill to take on this challenge with Poppy and Kaitlan. I’ll get to work with two of my dearest friends. Set your alarms folks, because we’re going to have a lot of fun.”

Who would be excited about moving to the mornings at CNN? New Day began in 2013. It has had “five different co-host combinations for its weekday version and three for the weekend.”

It has always finished third in the morning behind Fox and MSNBC.

Then again, Licht created Morning Joe on MSNBC and “revitalized ‘CBS This Morning.'”

Or maybe it’s to slowly to get rid of Don Lemon, who is one of the most partisan employees at CNN. Last month, Lemon said the media should “treat Republicans as a danger to society.”

In January 2020, Lemon burst out laughing when Rick Wilson mocked Trump supporters as uneducated hillbillies because that’s so creative and original.

Keilar also has “liberal leanings.” Maybe it’s a way to let her go, too, eventually?

In May, Licht said he wanted to redo New Day.

His new show will be a lemon, too.

“”It’s going to be a thrill to take on this challenge with Poppy and Kaitlan.””

Translation: “This sucks, but I’m glad I still have a job.”

It’s like PeeWee Herman falling off his bike and saying “I meant to do that!”

Happy talk to try and ride out the contract. That hack would never have been hired if he didnt check off so many quota boxes in the intersectional olympics

“Set your alarms folks, because we’re going to have a lot of fun.”

By “morning show” I hope they mean early, like 6 or 6:30, so the kiddies can laugh at his orange wig, red nose, and outrageous commentary every morning before catching the school bus.

Man, this is akin to that “Band of Brothers” scene where Colonel Sink relieves the asshole Sobel from Easy Company and “generously” transfers him to command a jump school for non-combatants. Licht is killing Lemon with kindness, I’d say.