“Friends, I’ve decided that, after 20 years, I’m leaving @cnn after my vacation. Was great to spend my last day on air with pals Wolf, Anderson and Don. Love all my former colleagues.” 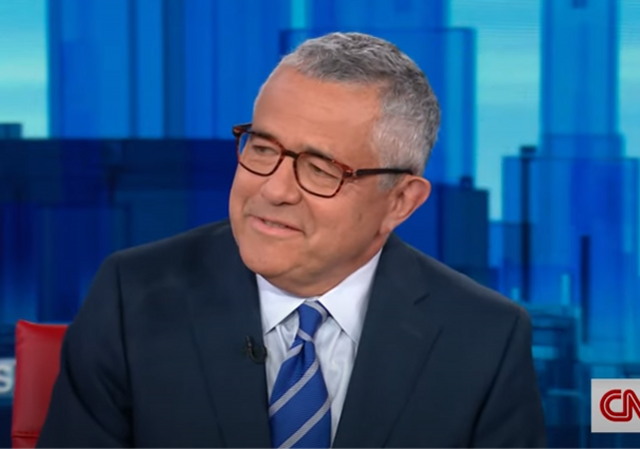 Jeffrey Toobin’s legal career dates all the way back to the Iran-Contra years when he worked as an associate counsel for the Independent Counsel team led by Lawrence Walsh, a former U.S. Deputy Attorney General. After that, Toobin took on the job of assistant U.S. Attorney for New York’s Eastern District. He then went on to write for left-wing publications like The New Yorker while also providing legal analysis for news outlets like ABC News and CNN, the latter of which he began working at in 2002.

Though some (mostly on the left) would say he’s had a distinguished career, Toobin will forever be known by most people as the guy who got caught by his New Yorker colleagues fondling himself on a Zoom video call in October 2020, an embarrassing incident over which he ultimately lost his New Yorker gig.

In the aftermath, Toobin took some time off from CNN, which took no action against him over what happened during that infamous video call. But nearly two years after the incident and a little over one year after he returned to CNN, Toobin has decided to call it quits, announcing Friday it in a tweet on which he limited comments:

Friends, I’ve decided that, after 20 years, I’m leaving @cnn after my vacation. Was great to spend my last day on air with pals Wolf, Anderson and Don. Love all my former colleagues. Watch for my next book, about the Oklahoma City bombing, coming in 2023 from @simonandschuster

Naturally, the double entendres were fast and flowing:

Looking forward to more private time to get in touch with himself again. https://t.co/HA0GQExX2a

He reaches the climax of his career https://t.co/dYXjXrXEYd

Enjoy the time that you get off https://t.co/JajtZ9LskO

Off to spend some quality alone time? https://t.co/0vYzyo2Zpc

As a general rule, I hold the mindset that a person’s life shouldn’t be defined by one singular incident where they fell from grace (assuming that incident didn’t involve committing a horrible crime), but one exception to that rule for me is Jeffrey Toobin, whose worst known offense, in my opinion, was trying to force a young woman he had an affair with into having an abortion.

Back in the early 2000s, Toobin—who is married and has two children—had a long-running affair, and at one point, she became pregnant by Toobin. Though she had the child, it was reported later that Toobin was such a concerned lover that he actually offered to pay for an abortion.

According to a source, when she refused, Toobin told her she shouldn’t expect any help from him. The New York Daily News wrote about the details of their on-again/off-again affair at the time:

“Jeff and Casey saw each other off and on over the years,” says one source. “She was married to someone else for two years. After her divorce, she started seeing Jeff again. He said he was going to leave his wife for her. But, by then, Casey had begun to distrust him. She suspected he had several other mistresses.”

Greenfield underwent a risky DNA test while pregnant, but Toobin didn’t provide his sample and stopped talking to her, according to sources. On the day she gave birth, Greenfield e-mailed Toobin, inviting him to meet his son, Rory. A source says Toobin didn’t reply.

Toobin ultimately cooperated with a DNA test that proved he was Rory’s dad. In February, a Manhattan Family Court judge ordered him to pay child support. When he refused to pay the full amount, say sources, Greenfield’s lawyer threatened to notify his employers and garnish his wages; Toobin then paid up.

Sounds like a real peach of a guy, doesn’t he?

Despite that, CNN actually had him on several times to provide commentary on the Mississippi abortion law case that eventually led to the Supreme Court overturning Roe v. Wade.

CNN has Toobin on discussing SCOTUS Mississippi abortion arguments, which if you know anything about him, is just perfection. https://t.co/z4CGKmt3Vc

Toobin, of course, was opposed to it being overturned.

Though Toobin has not said what his plans are post-CNN, our sources tell us that he wanted more time to take matters into his own hands.

Actually, our sources haven’t told us anything about Toobin. But it’s not too hard to guess what he’ll be up to now that he’s decided to pull out of CNN.

absolutely. I know there is a best Branco cartoon of the year (actually, I haven’t seen any this year… hmmmm), but I nominate this article for the best HEADLINE of the year.

By CNN standards always thought Toobs was pretty decent guy. At least he could keep his hands to himself.

Evidently not, given the incident reported in this post. 🙂

Toobin is an example of “less than meets the eye” while at the same time getting himself into a very sticky situation.

But Stacey wins headline of the year.!

On Fox News, scroll down to the bottom of the central column and you’ll find Branco.
.

During the Supreme Court’s consideration of Dobbs v Jackson, Washington Free Beacon has this priceless headline on an Andrew Stiles column: CNN’s Jeffrey Toobin Worried SCOTUS Could Take Away His Right To Bribe Mistress To Get Abortion

And that story is exactly why so many MEN are against the Roe V. Wade overturn.
If they can convince women that sex is free and without consequence, then they can have as much guilt-free sex as they want. No matter how it effects the women involved. Now women are “having” to be more discerning about the men they sleep with, and THAT is disturbing to the “use-em-and-lose-em” culture,

He was probably fired. Warner Discovery is cleaning house. At CNN and elsewhere.

They recently memory holed (Woke) Batgirl: after $90 million was already spent on it. It will not be released anywhere. Not in the theatres, not on streaming services, not on DVD/BluRay/HD disk. It is as if it never existed.

Hopefully, Toobin is soon followed by Stelter, Lemon, and Acosta.

Was Batgirl a Bialystok-Bloom production, perchance?

He will be fondling…er, fondly remembered.

Would that he had taken Robert Browning’s words to heart- “ A man’s reach should exceed his grasp.”

“When I hear the word ‘culture’ I reach for my Browning”. But does he grasp it?

I automatically do the same.

The so called ‘democracy’ is at stake. So what is this democracy? I doubt i will get an answer to this.

This contemptible, pervert-wanker will never be able to escape the shameful shadow of his act of ill-timed and obnoxious onanism.

English is a fascinating language. “He plays by himself” means the child is a loner. “He plays with himself “ means… something else.

Well now he can come to grips with himself. Take matters in hand as it were.

Will the new IRS army look into Toobin to see what he’s been doing under the table?

True to form, rather than waiting around for CNN to fire him……….

He took matters into his own hands.

From the comments so far, this theme is getting beaten hard.

Beaten hard reminds me of a recent news article. It seems Toobin wanted a pet so he went to a dog breeder and asked them to cross a dachshund, a black lab and a Blue Heeler.

What did he get?

A black and blue weiner.

I’m amused how Tubin has contributed to pop culture. He will be remembered beyond his career for a single act. At least we hope it was a single act.

As an ally of the LGBTOMGWTF movement, Toobin plans to star in a remake of his favorite video.

He is a disgusting pig

Small
Hands by the way

Selfiesm in the modern model.

Jeffery Toobin is getting a new gig on MSNBC along with Anthony Weiner. The program will be called, “Let’s Go Weiner Toobin.”

“In February, a Manhattan Family Court judge ordered him to pay child support. When he refused to pay the full amount, say sources, Greenfield’s lawyer threatened to notify his employers and garnish his wages; Toobin then paid up.”

Wait ’til you hear how much his hand is suing for.

He isn’t the only sleazy person to have worked at CNN. Good riddance to him. Hope there are more to come.

There’s a rumor making the rounds that Toobin’s favorite oldies group is Three Dog Night. Every time he hears the words “Easy to be heartless …” he heads for the bathroom.
.