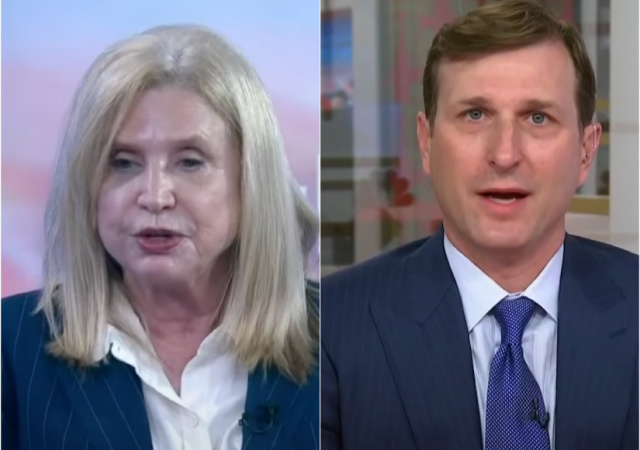 The Democrats received a taste of their own medicine on Wednesday night when former President Donald Trump “endorsed” a few New York Democrats ahead of the August 23rd primary.

Lawyer Dan Goldman is running for Congress, NY-10, and it is my great honor to Strongly Endorse him. I do this not because of the fact that he headed up the Impeachment Committee and lost, but because he was honorable, fair, and highly intelligent. While it was my honor to beat him, and beat him badly, Dan Goldman has a wonderful future ahead. He will be very compassionate and compromising to those within the Republican Party, and will do everything possible to make sure they have a fair chance at winning against the Radical Left Democrats, who he knows are destroying our Country. I would like to thank Dan for fighting so hard for America, and for working so tirelessly to stop “Trump.” He was not easy to beat, but winning against him made me realize just how very talented I am! 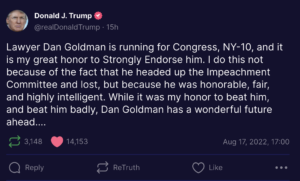 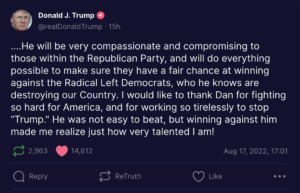 Goldman fired back. It’s laughable because does he really think Trump is serious?

You will forever be known as “Trump–endorsed Daniel Goldman” https://t.co/Wi25qK1Ash

Trump even praised Rep. Jerry Nadler, the man facing off against Maloney. They are running against each other due to redistricting:

A vote for Carolyn Maloney in NY-12 is a vote for the future! She is a kind and wonderful person, who has always said terrific things about me, and will support me no matter what I do, just as I supported her very early on. She begged for a check with no quid pro quo, and I gave it to her. In fact, I gave her many.On the other hand, Jerry Nadler is likewise a hard driving man of the people, whose energy and attention to detail is unlike anyone else in Congress. He is high energy, sharp, quick-witted, and bright. You can’t go wrong with either, but Carolyn Maloney is the better man. She will lead our Country into a very GREEN and prosperous future. Carolyn has my Complete and Total Endorsement, she will never let our Conservative Movement down! 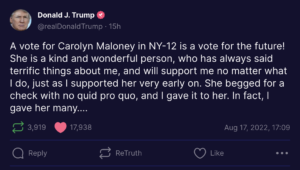 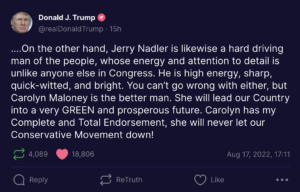 Well, the Democrats have promoted and given money to Trump-backed candidates in Republican primaries, thinking they’ll be easy to beat in the general election.

But God forbid Trump wades into a Democratic primary, sarcastically or not. Democrats who suffer from severe TDS probably think Trump is serious.

I’m in the new 10th, and still registered as a D, so I have a week and a half to figure out which of these dozen candidates is the least bad.

There does seem to be one good one, Brian Robinson, but of course he has no chance of winning. If there isn’t a significantly least bad among all the viable candidates, then I’ll vote for Robinson, but if there’s a chance my vote could give us a slightly-less-bad winner then I should take it. And so far it’s looking like Goldman might be that slightly-less-bad person. At least he seems less bad than Mondaire Jones or Yuh-Line Niou. But maybe not less bad than Joanne Simon. I don’t think any of the others are serious contenders. Liz Holtzman is trying for a comeback; her theme seems to be that she got Nixon so she’s the best person to get Trump. I don’t really know anything about the others.

Not quite. She’s 81. Five years older than Trump and a year younger than Pelosi.

An endorsement is “election meddling” now? Tell it to Obama and any POTUS before him.

Mean tweets are bad, but trading jabs about intelligence are okay as long as they are coming from the “good guys”?

Ha, I checked out the tweet comments. These wokes are so narrow minded that they can’t see beyond themselves, like middle school mentality.

My guess is Trump knows the poll numbers and he just threw gasoline on their dumpster fire. Goldman just provided that instead of focusing on what is important, it is a personal thing. People don’t want to be dragged in to his fight and will likely lose votes.

Mega trolling by Trump. A thing of beauty.

Once saw Maloney during Congressional testimony–she’s an incoherent nut bag but they just keep sending her back.

“On the other hand, Jerry Nadler is likewise a hard driving man of the people, whose energy and attention to detail is unlike anyone else in Congress. He is high energy, sharp, quick-witted, and bright.”

If he drives at all any more, the only place Waddler drives to are Popeyes, KFC, Burger Thing or any of the wonderful pastries shops in NYC.

Waddler is “is high energy, sharp, quick-witted, and bright.”

My replacement glasses frames have yet to show up.
Using my old prescription, more than once I read this as:
“Jerry Nadler is likewise a hard drinking man of the people…”

Should have linked the one of him waddling off stage because he schiffed in his pants.
Watch until just about the end as he slides off camera.
https://www.bitchute.com/video/Uc1hAx89IRjv/

Nadler or Maloney; too bad they both can’t lose!