As the Taliban establishes Islamic rule, beheadings will become the Sharia-sanctioned punishment for non-believers and those regarded as the enemies of Islam. 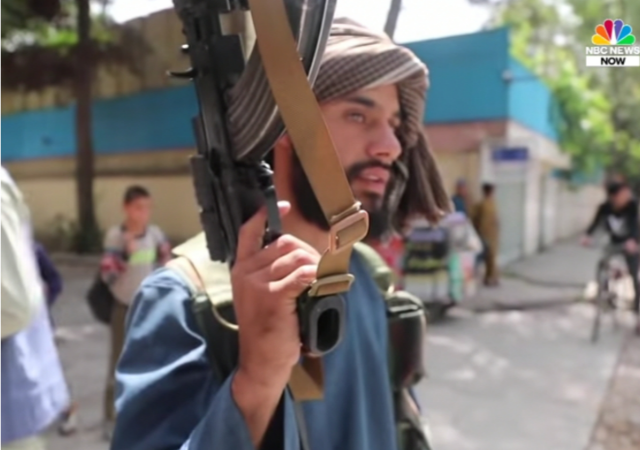 As the Taliban consolidates its hold on power, reports of executions and mass killings are coming in from all across Afghanistan. The Islamist militia beheaded two boys aged 9 and 10, the media reports on Wednesday said.

Taliban fighters are hunting down former Afghan government officials and security personnel. Besides targeting people connected to the deposed government, the Taliban death squads are murdering their family members — including minors, Jean Marie Thrower, a former U.S. Army officer working on getting stranded Americans out of Afghanistan, told the National Review.

Even retired members of the Afghan army are marked for death by the Taliban. “We’ve got people who retired, ten, 15 years ago. They killed the Taliban, and the Taliban don’t forget,” Thrower says. “We have one guy who was just working on cars. He said, ‘I haven’t done this, I haven’t been in the resistance for 15 years, but they have my name and they’re calling me.’”

Thrower disputes the U.S. State Department’s characterization of about 100 Americans being left on the ground; she said that as of a few days ago, the figure her group had was closer to 1,000 — although she noted that every group making a rescue effort has its own list, potentially leading to overlap with one another in certain cases. The 1,000 figure may include U.S. green-card holders, too, which the State Department is putting in a separate category. (…)

She describes the case of an American child whose Afghan uncle was recently killed by the Taliban. “We have had people shot, beheaded. They’re taking the kids. If you’re on the run, and they find your family, they’ll hurt your family and put the word out in the neighborhood that ‘we’ve got your brother or son or daughter.’ They cut off the heads of two boys that were nine and ten.”

The United Nations have confirmed the large-scale ‘revenge’ killings by the Taliban. “My office has received credible allegations of reprisal killings of a number of former ANSF (Afghan National Security Forces) personnel, and reports of officials, who worked for previous administrations and their family members being arbitrarily detained,” UN human rights chief Michelle Bachelet said on Monday.

The BBC and other media outlets have also confirmed mass killings of unarmed civilians as Taliban fighters lay siege to the last remaining pockets of resistance in the north. “The BBC has found that at least 20 civilians have been killed in Afghanistan’s Panjshir Valley, which has seen fighting between the Taliban and opposition forces. Communications have been cut in the valley, making reporting difficult, but the BBC has evidence of Taliban killings despite promises of restraint,” the broadcaster reported on Tuesday.

There are other disturbing reports of beheadings by the Taliban as well. Earlier this week, a video obtained by the Washington Examiner showed Taliban fighters beheading an Afghan soldier while chanting Allahu Akbar and praising their Supreme Leader Hibatullah Akhundzada.

As the Taliban establishes Islamic law across Afghanistan, beheadings are to become the Sharia-sanctioned punishment for non-believers, apostates, and those regarded as the enemies of Islam.

But Biden said deaths after the end of wars is normal. The grand sweep of indifference to suffering he created.

Besides, when it comes to kids brutally murdered this month, Biden is still ahead by five.

Maybe the UN could send a stern letter or something. Doubt they could muster the will for such drastic action, however.

The UN would send their blue hats in to fuck the little boys instead.

The UN Human Rights Council will get on this right after they finish with Israel, I’m sure.

Hey, we may not murder children but we allow private people to do so without restraint, and call it a constitutional right. And sometimes we pay for them to do it.

What in the world are you talking about??
.

Now remember this is the new kinder and gentaler Taliban,turns out nothing changed and only imbecile would fall for that Bravo Sierra.

Karmas a Bitch Mr Biden! Wait for it.

Real nice friends the pedophile-in-chief has over there.

Very sad to hear but not surprised at all, it will become a killing field just as every revolution produces.

And Milley gives heads up to communist red China about bolt from the blue thermonuclear launch.

No, he didn’t. He (allegedly) told his Chinese friend that he would have given him notice if there were going to be an attack, so he should trust him that there wouldn’t be one, unless they forced our hand, so they shouldn’t do that. Which was the truth, and it was in our interest for the Chinese to believe it.

That’s what they do.

Sorry, no longer our problem.

Speak for yourself. For some of us who’ve served there and have friends trapped there, it is “our” problem.

It’s meant to intimidate others with families. It’s not just their own courage that risks their own lives but they’re risking other people’s lives.

Was it done peacefully /s

“These are just isolated beheadings. Look at all the people they aren’t beheading.”

They were probably Trump supporters. And like the treasonous Nancy Pelosi says:

And Pelosi is as much of a traitor as Milley:.
https://nypost.com/2021/09/15/is-nancy-pelosi-pulling-gen-mark-milleys-strings-devine/

Sodomy and abortion are socially progressive in that neck of the woods.

Cancel culture. That is to say, resisting taking a knee, earns summary judgment and “burden” relief.

Remember, according to Xi-den and the vile Dhimmi-crats, the goose-stepping, Muslim supremacist/terrorist, Taliban thugs are the U.S.’s “partners.”

This is why President Dementia should not have left Americans behind. How many will get the same treatment?

“This is what the Taliban are. This is what they do.”
Nine and ten, eh? Tsk, tsk, tsk.
How old were the kids that Biden droned?
Who is it what we are? What is it that we do?

Guys, the utterly depraved acts that are being carried out in Afghanistan are tragic but entirely predictable. There are many in the US Govt, the media, the defense complex and permanent DC both official and unofficial who will use these images to advance their own agenda.

Their cynical, opportunistic attempts to use guilt as lever to get US Forces back into Afghanistan in any numbers should be rejected. Many of these people are the same ones who mismanaged the wars in Iraq and Afghanistan. The same folks who neglected to properly resource the Afghans to be able to fight for even thirty days post US withdrawal.

We spent trillions in Afghanistan. Much of it wasted. Much of it funneled to a corrupt govt, inept and unnecessary aid projects and all of it flowing through the sticky hands of the defense complex and NGO complex who just happen to be the campaign donors and lobbyists offering money and cushy sinecures to their ‘friends’. It was a bipartisan feeding frenzy at the massive govt trough.

Until we get our Citizens and green card holders out and if possible the deserving Afghans who earned a special immigration visa we should do what it takes to get them here. After that, IMO the Afghans have to decide for themselves whether they will accept Taliban rule. We have spent enough blood and treasure.

If you disagree then feel free to form some latter day Abraham Lincoln Brigade, pick up a rifle and go to Afghanistan to offer your services.

Hmmmm, an anonymous down vote which indicates that the person recording it lacks both moral courage and the initiative or commitment to make their case.

Gonna go out on a limb and presume they probably lack the physical courage of their conviction as well. Presumably you align with the other chicken Hawks who prefer to outsource their fighting and dying to others. Change my mind.

Hey Biden, this is the new government you created. Still think they should be welcomed to the world stage? The blood from these murders is on your hands.

“Still think they should be welcomed to the world stage?”

With the now third most lavishly equipped military machine on the globe overnight, it’s gonna be hard to keep them off it.

Biden cares for no one and nothing but whatever power he can wield, whatever money he can steal, and whatever it takes to keep his coke head son out of prison. That is what motivates him. Everything else is either immaterial, or collateral damage