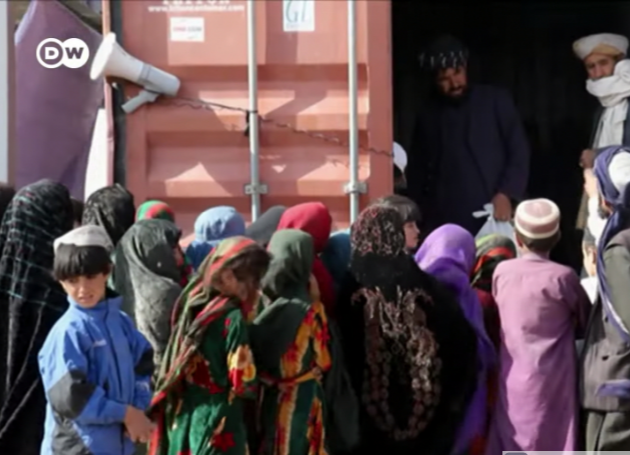 Less than two months after the Islamist terror militia took over the country, Afghanistan is facing a major food crisis. According to the U.N.’s World Food Program (WFP), millions of Afghans could die unless immediate food aid is delivered, the news reports on Monday said.

While the Taliban have been busy hunting former regime officials and imposing the Sharia law, the country of nearly 40 million people is heading towards a famine. “In the west of the country, thousands of poor families have already sold their flocks and fled, seeking shelter and assistance in packed temporary camps near major cities,” the New Delhi-based newsweekly India Today reported.

In some provinces, the hunger-stricken families are forced to “sell young daughters into marriage,” the newspaper The Australian wrote on Tuesday.

The BBC, on Monday, reported the worsening situation in Afghanistan:

Millions of Afghans will face starvation this winter unless urgent action is taken, the UN World Food Programme (WFP) has warned.

More than half the population – about 22.8 million people – face acute food insecurity, while 3.2 million children under five could suffer acute malnutrition, the WFP said.

“Afghanistan is now among the world’s worst humanitarian crises, if not the worst,” said David Beasley, the executive director of the WFP. “We are on a countdown to catastrophe.”

Afghanistan fell to the Taliban in August after the US pulled out the last of its remaining troops and the militants swept across the country retaking ground. (…)

Many Afghans are now selling their possessions to buy food. The new Taliban administration has been blocked from accessing overseas assets, as nations assess how to deal with the hardline group, meaning wages to civil servants and other workers have been withheld.

The WFP warned that the looming winter threatened to further isolate Afghans dependent on humanitarian assistance to survive. And for the first time in Afghanistan, urban residents are suffering from food insecurity at similar rates to rural communities, the organisation said.

Earlier this month, the United States agreed to provide humanitarian assistance to the jihadist-ruled country.  The Taliban spokesman on Sunday confirmed that the “global humanitarian aid” had arrived.

Despite the Biden administration’s decision to resume aid to Afghanistan, the Taliban have threatened the U.S. and Europe if more economic concessions are not made to their newly-established Islamic Emirate.

The jihadist militia has vowed to flood the West with illegal immigrants if their demands were not met. “Afghanistan’s new Taliban government has warned the US and European envoys that continued attempts to pressure them through sanctions will undermine security and could trigger a wave of economic refugees.” the French news agency AFP reported on October 13.

These are credible threats. The European Union is already witnessing a surge in Afghan migrants since the power-grab by the Taliban.

The Taliban wants the “kuffar” non-Muslim Western governments to provide billions of dollars to run its Sharia-governed Islamic Emirate. Before the Islamist takeover, Afghanistan was heavily dependent on Western aid. “Some 40% of the country’s GDP – national output – comes from aid,” the World Bank estimates.

Were we to ship aid to Afghanistan we would be complete fricking idiots.

We made a deal with people who will never live up to their end of the deal unless you force them to. It was a mistake that should be rectified in short order.

It’s also why she should have never made a deal with Iran.

txvet is correct much like the US totalitarian parasite class the top dogs will get whatever aids sent. that’s been the way for decades and it’s not changing now.

Could be worse, just imagine if Joe Biden had been elected in Afghanistan. Worse yet, he could send Kamala in his place and she could oversee their rehabilitation.

This country cannot survive on its own. It always will be looking for more support from the world.. 60% of the population has nothing productive to do – and no skills – therefore cannot support themselves. Those who are productive cultivate Poppies for Heroin.

The birth rate is highly – as well as the infant mortality rate. Half the population are addicted to drugs.

Maybe its time for a sterilization program ? This solution may seem drastic – but nothing else is working. All they produce is misery.

Incorrect. They are entirely capable of surviving on their own. They choose to do things that impair people’s ability to take care of themselves and their families.

I’m sorry for the people who live under the Taliban boot but we do not help them by propping up that despicable regime.

Thanks to the EXTREME incompetence of those in charge here and in Europe, we are struggling to absorb another Energy Price Shock. Much like the one in the 1970’s this has set off a wave of inflation.

Closing down drilling has lead directly to a shortage of gas and oil. As a Direct result of this idiocy, Fertilizer plants though out the world are being shut down. And, since 1/2 of 3rd world agriculture relies on that imported fertilizer, there will be a food shortage this year. And, a catastrophic shortage the following year.

This is Global FAMINE on a Biblical Scale. Democrat stupidity and ignorance of economic laws is going to lead to Starvation for 100 million poor children.

And, at this point, there is NOTHING we can do about it. All we can do is watch the train slide off the tracks.

They and people in Palestine have much in common, deranged and complete welfare cases. Not one dime.

Apparent but unstated in many of the comments: It’s not my problem!

You’re right. It isn’t. You can’t have it both ways. If you insist that the US isn’t the world’s policeman and that we should stay out of other countries’ affairs (as a huge number of Americans do), you have to accept the fact that other countries are going to act in ways we might not approve of and it’s none of our business unless it affects us directly. A difficult tradeoff, but inevitable. Anyway, what do you recommend – re-invading Afghanistan? It’s easy to claim the moral high ground. It’s harder to keep it.

If we’re going to re-invade Afghanistan, we should probably just start conquering the world. It’s the only way to stop all the hunger and poverty, you know. If it saves even one life….

The fact is the Afghan people, by not resisting strongly the advance of the Taliban chose this outcome. No question they were in a bad spot and many chose the temporary safety of not resisting v the longer term safety of fighting and defeating the Taliban.

You are more than welcome to venture to Afghanistan to render aid and assistance in the manner of your choosing.

SO MANY SIMILARIES BETWEEN USA AND AFGHAN

1. People trusted their leaders to keep the crazies out. But now the crazies are running the government.

2. The government is illegitimate

4. The borders are open

6. Fundamentalists are in power (Islamic in Afghan – Woke in USA)

7. Math, logic and reasoning are forbidden.

9. Parents have no say in what their kids learn

10. Justice system serves the state – not the people

I am willing to see how the next few election cycles work out. Frankly it appears that the d/prog in your face overreach by insisting upon the implementation of divisive policies which are opposed by the majority and in some cases immediately and clearly ineffective: immigration, CRT, massive inflation, the highest number of folks quitting jobs ever have transpired to reveal quite clearly to anyone who could be influenced that the Biden admin in particular and the d/prog generally are a disaster when in charge.

Should the electorate not self correct then I am self sufficient enough to withstand any short to intermediate term turbulence. I recommend everyone else do the same.

Lol… was supposed to be Wahla!

Perhaps you meant to write “voilà.”

Taking care of the starving Palestinians

The Taliban will skim off a good portion of aid.
Leftists did this to Afghanistan, their 0 plan just get out as fast as they could. They armed them and should not be amazed now how it’s turning out.

I have no time for the UN.

Well, we gotta listen to them, right? They’re experts and know everything!

Next week, WHO will be announcing that the Taliban are going to be slated for extermination by the latest “ẓaghush variant” of COVID. And we must believe them.

Less than two months after the Islamist terror militia took over the country, Afghanistan is facing a major food crisis.

And . . . . ?? Why would that be any concern of the United States, If the UN wants to send food to the taliban terrorists then let some of those theocratic dictatorships send the Afghan taliban terrorists food and supplies. We certainly don’t need to do so.

The UN is worthless overall.
Unfortunately, if they send $, most of it comes from……US!

Frankly, Afghanistan is going to be a hellhole forever, with nothing but death and misery, especially for women.

Don’t be surprised if a lot of women, especially in cities, opt for suicide, considering it preferable to the horrible conditions – economic, physical and psychological – under which they would be forced to live.

The Biden Administration is now a bigger threat to American citizens than the Taliban or ISIS.