“Beijing’s debt map spans Cambodia, Laos and Myanmar to the Maldives and Nepal.” 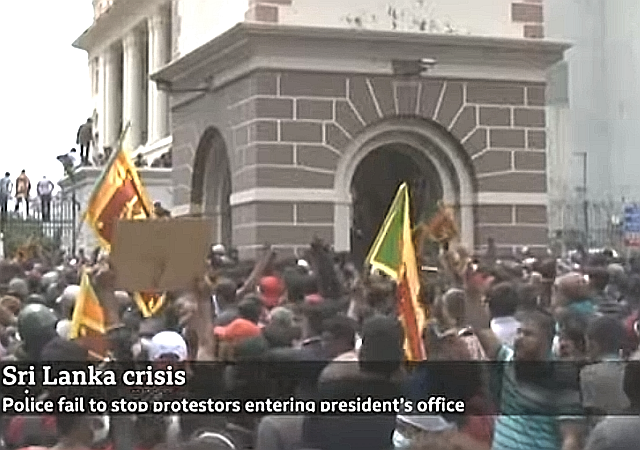 The government in the Sri Lanka has collapsed amid an economic crisis created by mounting Chinese debt. Ranil Wickremesinghe, prime minister of the island nation in the Indian Ocean, was forced to resign, paving the way for an all-party government after thousands of protesters took over the presidential palace and key government offices over the weekend.

President Gotabaya Rajapaksa was reportedly moved to a safer location as demonstrators from across the country marched on capital Colombo. They blame his government for the biggest economic crisis in the country’s 74-year history caused due to mounting Chinese debts. “Many blame the Rajapaksa family, in power for years, for mismanaging the economy and borrowing heavily from China,” the BBC noted Sunday.

“Thousands of Sri Lankan protesters stormed into the president’s official residence in Colombo on Saturday, demanding his resignation as public anger grows over the country’s worst economic crisis in seven decades,” Reuters reported. “Soldiers and police were unable to hold back the crowd of chanting protesters, who also forced their way through heavy metal gates into the Finance Ministry and President Gotabaya Rajapaksa’s sea-front offices,” the news agency added.

Sri Lanka’s Prime Minister Ranil Wickremesinghe has agreed to resign after party leaders in Parliament demanded both he and the embattled president step down on the day protesters stormed the president’s residence and office.

The prime minister’s spokesman, Dinouk Colambage, said Wickremesinghe told party leaders that he will resign when all parties have agreed on forming a new government.

His decision came after the biggest protest yet swept Sri Lanka on Saturday as tens of thousands of people broke through barricades and entered President Gotabaya Rajapaksa’s residence and nearby office to vent their fury against a leader they hold responsible for the nation’s worst economic crisis. (…)

Sri Lanka’s economy is in a state of collapse, muddling through with aid from India and other countries as its leaders try to negotiate a bailout with the International Monetary Fund. The economic meltdown has led to severe shortages of essential items, leaving people struggling to buy food, fuel and other necessities.

The economic crisis, which led to acute food shortages and fuel price hike, resulted from Sri Lankan government’s inability to repay Chinese debt. Billions of dollars of debt was incurred by pouring money in infrastructure projects and purchase of military weaponry, taking the country to the brink of bankruptcy.

Between 2010 and 2015, “[o]ver $5 billion in Chinese loans fueled an infrastructure boom,” the Japanese business newspaper Nikkei reported in May 2022. Financing projects “ranging from a new port to an airport and broad highways that cut across the rural hinterland.”

Beijing became island nation’s biggest weapons supplier. “China had been a key weapons supplier to Colombo as the final years of the war intensified under Mahinda, with Chinese arms sales rising to $1.8 billion,” Nikkei added.

The massive Chinese investment in Sri Lankan infrastructure was part of Beijing’s global Belt and Road Initiative (BRI), a multi-billion project that seeks to give China the control over strategic ports, highways and railway networks across Asia and Africa.

Sri Lanka is of particular interest to China, as the Communist regime tries to encircle India, its key Asian rival. The Chinese People’s Liberation Army (PLA)  is pursuing a “string of pearls” strategy at sea by taking control of key ports and islands stretching from the Indian Ocean to the Persian Gulf. The move effectively gives PLA the ability to impose a naval embargo on India in case of a military conflict.

Sri Lanka is not the only Asian nation battling unsustainable Chinese debt. As Nikkei daily noted, “Beijing’s debt map spans Cambodia, Laos and Myanmar to the Maldives and Nepal.”

President Donald Trump’s administration repeatedly warned developing countries in Asia and Africa to beware of China’s uses of ‘debt diplomacy’ to rob them of their national sovereignty. In June 2020, then-Secretary of State Mike Pompeo urged developing nations to resist the lure of generous Chinese loans. Beijing was creating “an unsustainable debt burden” to subjugate poor countries, he cautioned.

It is not mentioned above, but iirc there was something about environmental concerns changing agriculture and power industries and both have had diminished output, with agricultural exports being a major source of income.
Maybe I am not remembering correctly.

You are remembering correctly.

Yeah, I was just about to mention that myself.

Because elsewhere I have read that a good part of their economic crisis was due to a bunch of bullshit “green” diktats that cratered both agriculture and industry.

PM Rutte of the Netherlands isn’t reading about it….

How about that guy in Italy? He want might want to reserve a plane.

Yes indeed you are correct.

The govt banned importation and use of all synthetic fertilizer and pesticides. Farmers were required to use ‘organic’ fertilizer. Crop yields plummeted. The govt was forced to import 1/2 $ billion worth of rice just to keep starvation at bay in a Nation that was previously self sufficient in basic agricultural staples.

Hungry people are desperate people. Desperate people do unusual things such as gathering in mobs to storm govt offices. No question the foolish debt played a large role but, IMO, the proximate cause was deliberately destroying the agricultural sector and hungry mouths.

Sri Lanka also decided to stop selling gas to the people and reserve it for buses and government uses.

Somewhere a Biden admin lackey is taking good notes on all of this for the coalition of unelected bureaucrats that are running our country.

Thanks all for the confirmation.
Had the government not ruined their own agricultural strength with AGW policies, perhaps they would have had food and income from exported food and would have been able to keep paying on their debt.
Canada, the Netherlands, Sri Lanka, countries championing policies that cause chaos to their own citizenry-
Wait until winter comes to Germany, other countries in Europe, people in the US especially that use heating oil,
If there is anyone as desperate as those starving, those freezing are probably of similar magnitude.

To MDP,
The article is completely misleading.
The tourist economy collapsed in 2019 when Covid lockdowns kept the tourists at home in Europe.
Then in 2021 the President of Sri Lanka declared the entire nation would go organic and he banned chemical fertilizer imports.
This led immediately to the collapse of the tea and rice growing industries.
It turns out yields from organic farming are much lower than those from modern farming.
So there is no locally produced rice to eat, no tea to sell, and no tourists bringing in Euros.
While Chinese debt is certainly not helping, the tea crop and tourism were both big money earners.
This is all squarely on the President banning chemical fertilizers.

Not clear that is a difference, anywhere.

Except apparently Sri Lanka, which I think is the point.

So they tried to follow the Davos crowd and got with the climate change movement and now they are broke and hungry.

China is a ruthless culture. Ruthless.

Too bad Trump couldn’t have offered colonialism straight out to Sri Lanka. Made it a territory.

I just hope that China sees African wildlife as a cash cow, so it doesn’t destroy all of it to build empty concrete apartment towers.

Wait, why would the good people over throw their government? Did they not listen to the Biden Administration that says we have the best economy ever?

A thought experiment: what if the new, ‘all-party’ government repudiates the Chinese debt?

So, what if they told the Chinese to go pound sand over the debt?

Yes, I know that in usual situations the massive debts run up by corrupt, stupid, evil, clueless, and/or despotic governments must be paid — the international order says so. If you don’t, no new money. So Sri Lanka right now is forced to grovel with the IMF, the World Bank, and so on, who will help them convert all that Chinese debt into new, more massive, Western debt.

I’m not sure this does the average Sri Lankan any favors.

Repudiate the Chinese debt — what’s the worst that could happen?

Repudiate the Chinese debt — what’s the worst that could happen?

The Chinese invade, call it a “repossession”. Of course, they might have done that anyway.

For that answer look to answer another question:

What would Marsellus Wallace do in response?

What the heck happened? Sri Lanka had it all: socialist, globalist, and woke.
Apparently, when people own nothing they are NOT happy. Shocking

I await with baited breath the American MSM’s declaration that Trump’s anti-African-American racism has caused the collapse of this Mediterranean nation.

Or will that be Nancy Pelosi?
Or Elizabeth Warren?
Kamala?
Bueller?

Hey Democrats, this is what an insurrection looks like and yes, I am rooting for the people!

Sri Lanka’s previous administration went totally green and immediately went organic for its agricultural sector – halted use of petro-chemical fertilizers, herbicides, and pesticides. So, of course, production collapsed overnight. Couple of their big foreign exchange earners are ag products.
Then there was the covid shutdown that destroyed their tourist economy, their number 1 earner, along with the rest of the world’s.
They borrowed and borrowed to keep their country going and now they are broke.
We’re headed same way if we don’t halt this acquiescence to everything the leftists demand. They’re out for the “green” alright, just not the greening.

the feds just keep on printing and spending obligating taxpayers for generations into the future–grift or denial, it really won’t matter in the end–should our system here collapse will make what’s happening in sri lanka or what has already happened in south africa, look like a garden party

“The economic crisis, which led to acute food shortages”

Nope. The food shortages were caused by the government signing onto the green nonsense and banning fertilizer causing a massive decrease in crop yields. This has led to starvation. Figure I read was a decrease of over 40% in yields

Now, does any Sri Lankan have any clue about what his country might put in place of the socialist, globalist, woke system they had?

I can see China stepping in, occupying the place, looting it mercilessly, and saying they’re justified in doing so because “It’s really Chinese; after all, Zheng He stopped there.” If the Sri Lankans protest, China will say, “But we’re bringing scientific progress! You ought to be grateful! Look at how wonderful Tibet and Xinjiang have become?”

But, as for anyone else colonizing the place,, would any European power or the USA offer a better deal?