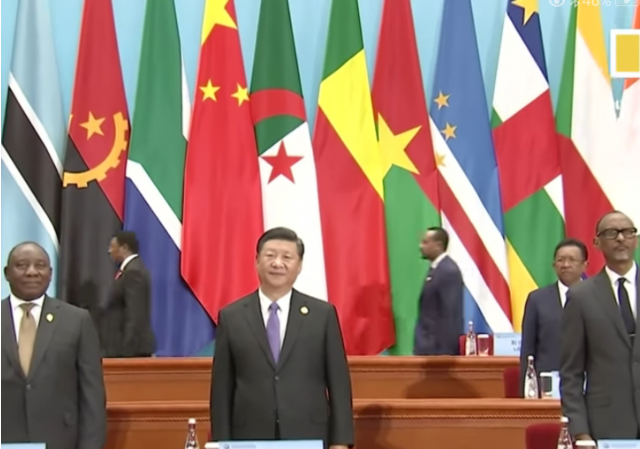 China is running a massive surveillance network in Africa, reveals a new report published by the Heritage Foundation, a Washington, D.C.-based think tank. The intelligence gathering operation was most likely run through State-owned Chinese companies involved in building critical government infrastructure. These firms have built or renovated around 186 top government buildings and 14 sensitive governmental telecommunication networks across the African continent, which include a number of presidential palaces, parliaments, and military installations.

Communist China is likely using this intelligence leverage to gain influence over African governments and recruit assets, the 23-page report warned. According to the report’s findings, Beijing could also be using this network to gain intelligence on rival U.S. companies, and insights into U.S. diplomatic strategies and military counterterrorism operations.”Beijing likely uses surveillance to, among other things, advantage its companies competing for contracts, spy on U.S. officials, and influence African officials” the report cautioned.

Here are some of the main takeaways from the report authored by Joshua Meservey, a senior policy analyst at the Heritage Foundation:

[…] Chinese telecommunications giant Huawei in the African Union (AU) headquarters were daily uploading their content to servers based in Shanghai, China. An inspection of the building—built by the state-owned China State Construction Engineering Corporation—also uncovered listening devices hidden throughout the building. [Source: Le Monde, Financial Times]

Since 1966, Chinese companies have constructed or renovated (or both) at least 186 such buildings. In fact, at least 40 of Africa’s 54 countries have a government building constructed by a Chinese company. Given the difficulty of gathering comprehensive data on independent China’s nearly seven decades of engagement with Africa, these numbers are almost certainly an undercount. (…)

There are compelling reasons to believe—beyond the fact that it has already done so with the AU headquarters—that the CCP is using the opportunity afforded it by Chinese companies constructing government buildings to gather intelligence. Doing so would be in keeping with Beijing’s extensive use of espionage and other malpractice to gain an economic advantage. A 2017 report branded China “the world’s principal IP infringer,” while a recent U.S. Trade Representative investigation found that the U.S. loses at least $50 billion every year to unscrupulous Chinese activity.

[…] Chinese companies have built, expanded, or renovated at least 24 presidential or prime minister residences or offices; at least 26 parliaments or parliamentary offices; at least 32 military or police installations; and at least 19 ministries of foreign affairs buildings. Having surveillance access to these buildings is an extraordinary opportunity for the CCP to gather intelligence directly from the highest levels of African governments. (…)

[…] Chinese surveillance could enable Beijing to recruit highly placed assets within African governments. If the CCP collected embarrassing or harmful information on an African official, it could blackmail cooperation from him or her. Or surveillance could gather other information, such as a recruitment target’s financial situation, which could facilitate recruitment. Having Chinese assets peppered throughout governments on an increasingly strategic continent is an obvious problem for the United States.

Beijing has played a long game in the continent. During the Cold War, China, along with Soviet Russia, trained and armed pro-Communist guerrilla movements across Africa. In Zimbabwe, formerly Rhodesia, China even managed to push aside the rival Soviet contender, putting Robert Mugabe into power.

Today, the weapons might have changed but the Chinese designs on the resource-rich but impoverished continent have not. Communist China is now deploying tools of economic warfare to expand its influence in Africa. China uses ‘debt diplomacy’ to subjugate African governments. In March 2018, U.S. Secretary of State Rex Tillerson warned African nations to resist the lure of easy Chinese cash. Those nations entering into agreements with China could “forfeit their sovereignty,” he rightly cautioned.

China, with its growing control over key ports, highways and railroads across Eurasia and Africa, poses a geostrategic threat to the Free World. Having embedded itself into the global free market, Communist China is freely helping itself to the West’s intellectual property and milking economic benefits on the free trade. Those gains have not translated into more freedom for Chinese citizens at home. Beijing’s growing economic clout has only encouraged Beijing to crush pro-democracy movements at home and threaten neighboring countries. Going by this track record, Communist China’s long-term footprint in Africa won’t be beneficial to the people of Africa either.

Oh, how I hope China tries to take over all of Sub-Saharan Africa! They’re going to have just as much fun trying to run it as everyone else who’s ever tried has. Especially given that everyone knows, even though we’re not supposed to talk about it, that the Chinese are among the most racist groups on the planet, and openly hate and despise all black persons.

You’ve got to hand it to the Chi-Comms: they build their nation by siphoning off all things American (including our manufacturing base and drug manfacturing base), bribed half our politicans into treason (start with bill clinton, Diane Feinstein, work your way down past pelosi, into obama, biden, kerry, hillary clinton), bought off our entertainment industry and corrupted just about everyone in it, bought off our schools (with many academics committing treason) and brainwashed a generation of kids, bought off our media and every ‘reporter’ in it (many of them committing treason), and they even bought off the NBA (and le bron james is their dancing fool, happy to shill for an enemy state).

America aside, they bought off Italy, African states, the EU, and who knows what else.

Given we know all that, it’s on us to take it all back. QUICKLY.

“start with bill clinton” Hillary is likely worse than Bill on this front.

Of course she is. Treason aside, she is a common thief.

But remember: bill started the treason, by giving missle technology to the ChiComms:

We need to take back our manufacturing for everything, absolutely.
But as to this:

“America aside, they bought off Italy, African states, the EU, and who knows what else.”

I think the harshest punishment of all is to make China keep them. It reminds me of the time that Churchill was informed that Italy was joining Nazi Germany at the outbreak of WW2; he said “Well, it’s only fair. We had to take them last time.”

I actually learned something in college: Popper-science. The refutable model that none the less tracks n predicts what happens is true, no matter how inconvenient.

Now, obviously anyone who has anything bad to say about Winnie-Took-HongKong or the CCP is raaaaaaacist. Or nationalist. Or something. Or maybe whatever model tracks n predicts what they’ll do is the right one (until a better one comes along.)

They think they have the way things should be; they;’re right because they’re better than us and should impose on the rest of use because they’re better than the rest of us. The current CCP believes there is a historical imperitive and they have it, collectivist hierarchical cultures are the way, and particularly the floaters on the top of the CCP pool are the selected best, only natural because they they are the ubermenchen heirs of the lost pure blooded Aryans — excuse me “Hans” — the descendents of heaven.

Of course they’re surveilling the world everywhere they can, it’s their right, and for the good. People in Africa are fodder: just another part of the ant hill.

Our CCP trading partners make sense once you model the notion that they’re people, and we’re ants in their ant hill. Plus they think that way about everybody.

I got some bad news for the Chinese. One, no one gives a rat ass what these African despots say or do…it will change tomorrow. Two..Africans do not repay debts. Three..no one makes money in Africa.

If you are to believe accounts from the Africans themselves, the Chinese are raping the continent. They couldn’t care less if it was left a smoking cinder after they’re done. They are investing huge sums of money in Africa, much more than anybody else. But they expect payback…and they will get it.

Africa isn’t the only place that been intensively spying and infiltrating.

By Eric Lendrum • May 22, 2020
Several American universities are fighting to block the release of documents confirming their ties to China, which are being sought by both the Department of Education and Congress, as reported by The College Fix.

The Department of Education’s General Counsel, Reed Rubinstein, sent a letter to Congress confirming that when the Department attempted to acquire said documents, lawyers on behalf of the universities claimed an exemption to the Freedom of Information Act to keep the records sealed. Rubinstein’s letter did not name any of the schools involved in the investigation.

As previously reported by American Greatness, several Ivy League schools, including Harvard and Yale, have been under investigation for failing to report all of their foreign donations. More recently, a former professor at Emory University was convicted for failing to report donations from the Chinese government.

Since August 2019, ProPublica has tracked more than 10,000 suspected fake Twitter accounts involved in a coordinated influence campaign with ties to the Chinese government. Among those are the hacked accounts of users from around the world that now post propaganda and disinformation about the coronavirus outbreak, the Hong Kong protests and other topics of state interest. They included a professor in North Carolina; a graphic artist and a mother in Massachusetts; a web designer in the U.K.; and a business analyst in Australia. (It is unclear whether the current fake account holders hacked the accounts themselves or purchased them from elsewhere.) Suspected Chinese operatives have stepped up their efforts in recent days, according to private messages shared with ProPublica, offering influential Chinese-speaking Twitter users cash for favorable posts.

These efforts appear to be aimed at disparate audiences outside the country. Most of the posts we found are in Chinese and appear aimed at influencing the millions of ethnic Chinese who live outside of China’s borders. Others are in English. The tweets are seen by few people living in China; the Great Firewall blocks Twitter from the Chinese internet, though tech-savvy domestic users find workarounds.

Twitter is well aware of China’s influence operations. In August and September, the platform announced that it had suspended more than 5,000 suspected Chinese state-controlled accounts and released data about them. Twitter also banned around 200,000 related accounts that had been created but were not yet very active.

I’ve been vacationing in the Caribbean for decades and the Chinese interests there continue to grow.

On San Lucia, they want to build a horse race track. If you look at the artist’s rendering of the facility, it looks like a ammo dump, strategically located near the airport.

Also, on St Maarten, there have been announcements of a resort facility, with most of the rooms reserved for Chinese.

Since Hurricane Irma, both of these projects seem to have disappeared from the local news, but I’m sure they will be back.